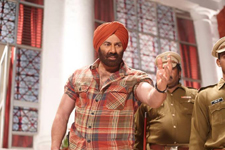 Nupur Barua / fullhyd.com
EDITOR RATING
5.0
Performances
Script
Music/Soundtrack
Visuals
6.0
5.0
4.0
6.0
Suggestions
Can watch again
No
Good for kids
No
Good for dates
No
Wait to rent it
Yes
Once upon a time, there was a Gadar, which in turn gave rise to a whole lot of movies (Maa Tujhe Salaam, The Hero etc.) that saw Sunny Deol yelling to prove his patriotism. After a long gap, Singh Saab The Great brings back those times of Punjabi dialogues and songs, the necessary reference to the "dhaai kilo ke haath", and Sunny Deol. As Anil "Gadar" Sharma would have us believe, nobody can endorse nationalism the way Sunny Deol can.

On to the story. In some obscure village in Eastern UP, a goon (Shahbaaz Khan) and his gang are being taught a lesson by the smiling leader of the Mango People (Aam Aadmi) organisation - not a political party, but more like an NGO. This leader does not want to initiate violence unless absolutely necessary. His name is Singh Saab (Sunny Deol), and after he pulps these bad men to, well, pulp, a song ensues, extolling his virtues.

And before you can say "Amrita Rao", she appears as a journalist who accuses Singh Saab of hiding his past life as a criminal. Singh Saab smiles, and decides to take her along to Bhadori while he recounts incidents from his past life to set the record straight.

Turns out that he was Saranjit Talwar, or Sunny, not too long ago. A collector posted in Bhadori. Life was perfect, he was honest, and he had a wife and sister, both of whom he adored. His wife, Minnie (Urvashi Rautela), who loves showing off her back, is miffed most of the time with him, because he never has time for birthdays, anniversaries or karva chauths, but he is inanely indulgent with her tantrums.

Saranjit devotes one day each week to his own private court sessions. Anybody can approach him, and all problems are solved immediately - thus stressing the difference between tareekh pe tareekh pe tareekh, and no tareekh.

The big-shot of the area is Bhoodev (Prakash Raj), whose ancestors have been rulers for centuries. When Saranjit demands that Bhoodev pay his taxes, the latter harasses Saranjit.

Cut back to the present, and Saranjit is now Singh Saab. None of Bhoodev's idiotic lackeys recognise him or his associates (Sanjay Mishra and Johnny Lever).

The idea of the story is this - why seek revenge, when you can change the way things work? It takes Saranjit a while and a lecture from an old friend (Rajit Kapoor) to realise this. However, implementing these ideals is a problem, and the temptation to just resolve it all with two tight slaps is sometimes too strong to resist.

Melodrama is rampant in the movie, especially when it comes to the brother-sister scenes, or even the husband-wife scenes. Since every important sequence is interrupted by a song, it is difficult to keep tabs on the plot points and their significance. However, somehow, there is a visible storyline that keeps making its presence felt once in a while.

The protagonist and the antagonist both love delivering long lectures to each other, making you lose track of what was going on in the first place. Comedy is inserted as an afterthought - scattered randomly across sequences. And every second dialogue is a quotable quote - this movie is either a film buff's dream come true in that respect, or his worst nightmare.

This film is all about Sunny Deol, and, to a slightly lesser extent, about Prakash Raj. Sunny Deol has not forgotten his Gadar days, and he leaves no stone unturned to remind us that he can still yell instead of speaking like a normal human being - but then, he is referred to as Superman once too often, and one of the prerequisites of being a superhero is a loud voice, at least in India. He looks old, though, and a lot like his father (this is also referred to at some point).

Prakash Raj, thankfully, is a villain with no shades of grey. He is all black, and he does a better job without those comic lines that are imposed on him in almost all his previous movies. He is menacing, and believable, and a true Hindi movie bad man.

Urvashi Rautela sulks and pouts all the time, and is rather irritating. She dances with intense aggression, and wears "sexy" clothes - Anil Sharma is intent on making her the next Amisha Patel, and we all know how that turned out.

Anjali Abrol is more confident, despite her rather flat character. She makes an impact. Amrita Rao is more convincing here than she was in Satyagraha, but her UP accent sounds quite fake and erratic.

Johnny Lever and Sanjay Mishra are sidekicks, as was expected, but the worst fate belongs to the bevy of television actors who are relegated to the sidelines - Amit Behl, Raj Premi, Manoj Pahwa, Shahbaaz Khan, and others - as Bhoodev's flunkies.

The music will appeal to all those who love Punjabi songs, and for those who do not, there is the item number, Palang Tod Paan (or some such). Most of it is immediately forgettable.

The production and costume designs are not paid much attention to - stereotypical sets and clothes; and smartphones in 2007? Sunny Deol, however, is always in mustard (either his trousers, or turban, or shirt) - it looks like his costume was the only one that was worth considering.

The cinematography is average, but there are too many high-speed moments, and not all of them in fight sequences - the most arbit action is slowed down, for no apparent reason. The movie could have done with a bit of polish as far as the editing is concerned. Also, the movie is too long.

Singh Saab The Great is strictly for Sunny Deol fans. He is in the frame all the time, and not once are you allowed to forget that this is yet another Sunny-Anil collaboration. This movie may just bring him back to the big league, where he belonged not too long ago. On a more optimistic note, this may also bring Amrita Rao back to the list of actors in demand. And Anil Sharma may just give us another Gadar to get over the disaster that Veer was.
Share. Save. Connect.
Tweet
SINGH SAAB THE GREAT SNAPSHOT 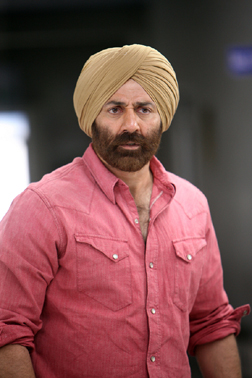 ADVERTISEMENT
This page was tagged for
saranjit talwar movie
Singh Saab The Great hindi movie
Singh Saab The Great reviews
release date
Sunny Deol, Amrita Rao
Follow @fullhyderabad
Follow fullhyd.com on
About Hyderabad
The Hyderabad Community
Improve fullhyd.com
More
Our Other Local Guides
Our other sites
© Copyright 1999-2009 LRR Technologies (Hyderabad), Pvt Ltd. All rights reserved. fullhyd, fullhyderabad, Welcome To The Neighbourhood are trademarks of LRR Technologies (Hyderabad) Pvt Ltd. The textual, graphic, audio and audiovisual material in this site is protected by copyright law. You may not copy, distribute, or use this material except as necessary for your personal, non-commercial use. Any trademarks are the properties of their respective owners. More on Hyderabad, India. Jobs in Hyderabad.