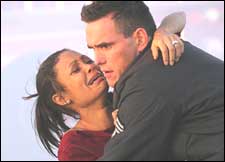 Kavita Krishnamoorthy / fullhyd.com
EDITOR RATING
6.0
Performances
Script
Music/Soundtrack
Visuals
NA
NA
NA
NA
Suggestions
Can watch again
NA
Good for kids
NA
Good for dates
NA
Wait to rent it
NA
You would think Crash serves a purpose. Sadly, all it succeeds in doing is rearrange the already existing thoughts in your mind. While the movie has a mighty beginning, the end is just a garble of events tumbling down a breakneck slope, eager to reach their culmination. And what you're left with is a confused concourse of cast, who pretty much have the same mindset as they did in the beginning. The only difference is that they don't know what to do with it next.

The cast of Crash features the who's who of Hollywood, and there are a couple of commendable performances. Brendan Fraser gives a nonpareil portrayal of an ambitious district attorney, and Sandra Bullock plays his wife in a role against her usual character, but pulled off with tremendous credibility. Don Cheadle as an LA detective is just perfect as usual, delivering the best dialogue of the movie: "Nobody touches you," he says. "We miss that touch so much we crash into someone just to feel something."

But while you enter the theatre with the intention of hating all the racists and bigots you may come across in the movie, what ensues is actually a director's game of presenting a person's ostensible character, and then following it up with evidence to the contrary.

The movie starts off with two black teenagers walking down a predominantly white neighbourhood, seemingly exploring the mistaken clichés about white people believing that a black person could only mean trouble. But then they almost immediately draw their guns out and hijack the district attorney's SUV, with Fraser And Bullock in it, at gunpoint.

Bullock's prejudices are very outright from this point on - she doesn't bother to hide the fact that she wants the locks in her house changed again since they were repaired by a colored guy, she starts getting suspicious of her house maid who's of Mexican origin, and she doesn't give a damn about who hears her outbursts.

The colored guy who changed her locks, turns out to be a "family guy" who has supposedly moved out of one neighbourhood to another where gunfire doesn't crack all night. This very locksmith mistakenly ends up on the wrong side of an Iranian who was bluntly called "Osama" by the owner of a gun store. A classic example of how ignorance feeds the racial prejudices of people, as Iranians are not Arabs, but Persian.

Meanwhile, a racist cop played by Matt Dillon sexually humiliates a black woman (Thandie Newton), with his rookie partner (Ryan Phillippe), and the woman's husband (Terence Howard), helplessly standing by. A couple of scenes ahead, the racist cop ends up saving the very same woman, and in another thread, there's an encounter between the husband and the younger cop.

The husband is dealing with his own demons, as the incident concerning his wife's molestation opens his eyes to his own situation as a black, even though he's a successful TV director in Hollywood.

The story relies a whole lot on co-incidence, which takes away from the genuineness of the movie. While Dillon's role of an extreme racist LAPD cop turned humanitarian neatly depicts the intertwining vignettes of the movie, the conflicting scenes are hardly convincing. Phillippe's role as the consistent good-hearted cop was more plausible.

Subtlety is not the theme here. There are no filters on the dialogues, and the plot warps into an entanglement of numerous guises of racism and ambiguity, which ends up becoming the movie's modus operandi.

Crash is definitely reminiscent of Traffic, but while the latter integrates just three cogent storylines, Crash attempts to interweave a myriad dramas. And ends up doing a not-so-good job of it.

This coming from the writer who gave us Million Dollar Baby. While Crash may invoke emotions, it fails to teach you much if you already knew prejudice and racism are bad. Catch this film without any major league expectations, and you may just end up gratified.
Share. Save. Connect.
Tweet
CRASH SNAPSHOT

See Crash full details
CRASH USER REVIEWS
1 - 4 OF 4 COMMENTS
POSITIVE  |  NEGATIVE |  NEWEST  |  OLDEST  |  MOST HELPFUL  |  LEAST HELPFUL
USER RATING
8.6
30 USERS
Performances
Script
Music/Soundtrack
Visuals
NA
NA
NA
NA
Can watch again - NA
Good for kids - NA
Good for dates - NA
Wait to rent it - NA
Angelina Jolie on 9th Sep 2006, 11:21am | Permalink
I agree- the reviewer must have slept through the movie ! Writing a review on a movie like this sitting in India is perhaps very wrong. In the United States, we have seen, known and heard of many instances that were portrayed in the movie - like Ludacris n his aide stealing the SUV, cops humiliating a black couple, accidentally shooting a black man thinking he would do some harm - these incidents happen everyday n every minute. What was portrayed in the movie is a tale of everyday happenings and how racism is fed thru ignorance and bais. And when you are dealing with such a subject, subtlety has to be thrown out of the window. Crash is definitely a real life portray of the struggle of an average american - black, white, asian, persian, whatever. Its a brilliant portrayal and hence the Oscar. I'm so glad the awards committee doesnt have a set of stupids who finds the movie as written in the review. My point is dont take a situation in the United States, and put it in the Indian context and analyze it. Things are way different here than in India. BTW - do you know that one of the "black teenagers" is Ludacris who is a very well known rapper in the United States ?
RATING
10
Occasional Critic on 16th Apr 2006, 11:46am | Permalink
Even more proof that fullhyd's reviewers are completely out of touch. CRASH is one of the best films of 2006
RATING
10
Rajesh Narasimhan on 9th Apr 2006, 1:35pm | Permalink
finally... someone stood up and told the story in the right manner. the oscar is quite an accident of sorts!
RATING
4
Anil on 8th Apr 2006, 7:53pm | Permalink
Is something wrong with the reviewer? Or did she sleep through most of the movie and read some summary online afterwards to write this review?

Crash is one of the most hard hitting and important films to come out of mainstream hollywood. What is wrong in portraying obviousness when what the film is trying to do is show what is around us? I think the reviewer missed the basic point the director was putting across, that we are not evil but bad. And we end up being bad because of circumstances, be it Matt Dillion's character's racism stemming from his mistaken belief that his father lost his job bcos of blacks etc etc. I think Haggis did a pretty good job of integrating so many disparate story lines into one unifying whole. In the hands of a lesser director the film would have unraveled into inchohesive threads. There is no obvious message in the end, it is left for us to take what we want from the film. And that is where the film succeeds so admirably, it lets us see the humanity present in each and every one of us. And that is where also, regretably, the reviewer afailed to grasp the 'point' of the film.

ADVERTISEMENT
This page was tagged for
Crash english movie
Crash reviews
release date
Sandra Bullock, Don Cheadle
theatres list
Follow @fullhyderabad
Follow fullhyd.com on
About Hyderabad
The Hyderabad Community
Improve fullhyd.com
More
Our Other Local Guides
Our other sites
© Copyright 1999-2009 LRR Technologies (Hyderabad), Pvt Ltd. All rights reserved. fullhyd, fullhyderabad, Welcome To The Neighbourhood are trademarks of LRR Technologies (Hyderabad) Pvt Ltd. The textual, graphic, audio and audiovisual material in this site is protected by copyright law. You may not copy, distribute, or use this material except as necessary for your personal, non-commercial use. Any trademarks are the properties of their respective owners. More on Hyderabad, India. Jobs in Hyderabad.