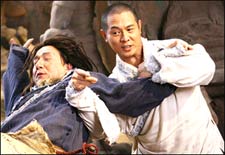 Samrat Sharma / fullhyd.com
EDITOR RATING
7.0
Performances
Script
Music/Soundtrack
Visuals
8.5
4.5
7.0
8.0
Suggestions
Can watch again
No
Good for kids
Yes
Good for dates
Yes
Wait to rent it
No
As kids, we would always fantasize about who could beat whom - Spiderman or Superman, He-Man or Conan, and, yes, Jackie Chan or Jet Li? Unarguably the biggest names in Kung-fu then as now, these actors both had their own fan followings, and thanks to Friday Fury re-runs, a lot of googly-eyed teenage fans who would fantasize about drunken masters and Shaolin temples and lightning quick reflexes.

Little surprise, then, that the film that finally pits both of them together on the same screen together is a teen fantasy action lite version of the Kung-fu movies we have watched. I always secretly hoped that a film that pits these two masterminds together would be a brutal, bloody and brilliant film of showdowns and macho posturing. Instead, what I get is a kiddy wet dream written haphazardly, and a mash up of all the tropes of Chinese films in the past, oh, 20 years.

The plot is so weak and thread-bare that it begs the question - are American audiences so awful that they can't palate a movie without an American in the lead? Jason (Michael Angarano) is a kid obsessed with martial arts films, and spends all his time in an antique store run by an old Chinese man. One day when a robbery goes wrong, the old man gets shot, and Jason falls off a building with a priceless staff of the Monkey King in his hand.

He magically gets transported to ancient China, and he must now return the staff to the Monkey King. Problem is the Jade Warlord also wants the staff for himself, so's he can rule the world.

Jason meets Lu Yan (Jackie Chan), a drunk master, who decides to help him. The party is joined by a young woman called the Golden Sparrow (Yifei Liu), and a silent monk (Jet Li) mirroring the Wizard of Oz more than anything, and all of them set out on the adventure henceforth promised. Both masters also train Jason in Kung-fu whenever they take a break, for plenty of Karate Kid throwbacks.

Indeed this is the film's only - though biggest - misstep. It assumes that topnotch CGI is paramount to carrying the film through, and focus on the kinetic energy they generate keeps the plot firmly in the backseat. Using the wafer-thin story to drive large CGI chop socky fist fights would have been criminal, but that is softened by the truly amazing balance the two non-leads bring to the film.

For a more American perspective, Jason is kept as the focal point of the narrative, but Chan and Li are the stars for which we ended up in the halls, yes? Both play double roles in the film - Chan is the aforementioned old Chinese shopkeeper, and Li also doubles up as the Monkey King - and the balance of their styles they bring to the film elevates what would otherwise have been a poor excuse for a Kung-fu flick.

Li's eagle eyed focus and grace, and Chan's manic energy and improvisations, are intact, though abetted by the CGI, and offer up a film that is still wish fulfillment of the sort we would dream up as kids. For a generation of kids now growing up on these movies, this is a watermark film, and for us, the grownups looking back nostalgically on the VHS tape collections of such movies we amassed, this is a fun, if ultimately inconsequential ride.

Don't expect much by way of kinetic exposition, but the film's strong points are the sense of joy and fun in watching these two legends take on each other, and the various throwaway bad guys that keep attacking them. If any one of these names make you go hiyah in the middle of the night, do give it a go, though standard caveats of American teen movie tropes apply. If the Kung-fu genre does nothing for you, might I suggest staying out of the way? The legends arrive.
Share. Save. Connect.
Tweet
THE FORBIDDEN KINGDOM (HINDI) SNAPSHOT

ADVERTISEMENT
This page was tagged for
The Forbidden Kingdom in Hindi Movie Download
forbidden kingdom movie in hindi
The forbidden kingdom in hindi download
download forbidden kingdom full movie in hindi
the forbidden kingdom.movie download in.hindi
Follow @fullhyderabad
Follow fullhyd.com on
About Hyderabad
The Hyderabad Community
Improve fullhyd.com
More
Our Other Local Guides
Our other sites
© Copyright 1999-2009 LRR Technologies (Hyderabad), Pvt Ltd. All rights reserved. fullhyd, fullhyderabad, Welcome To The Neighbourhood are trademarks of LRR Technologies (Hyderabad) Pvt Ltd. The textual, graphic, audio and audiovisual material in this site is protected by copyright law. You may not copy, distribute, or use this material except as necessary for your personal, non-commercial use. Any trademarks are the properties of their respective owners. More on Hyderabad, India. Jobs in Hyderabad.