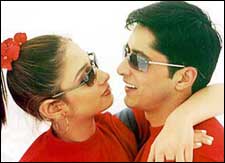 That, folks, was as vernacular a translation (of the first song) as my editor would allow me to make, not that there was any reason to make it. Other than my not finding a suitable intro for this review. Some would label it an exercise in escapism. They could not have been more right. The movie, though, is not as bad as the intro to this review. It is just one of those that we thought went out of fashion along with Rahul Roy and Anu Aggarwal.

In a world that can only exist on Bollywoodian celluloid, Raj Kapoor (serious, that is what they name the hero) frequently talks to his dead mother, and is still allowed to live outside the confines of a nut factory. Jia Oberoi and he have been in love since their diaper-wearing days, much to the approval of his mother (who even gives him a sindoori and a mangalsootra) and chagrin of her father (Kiran Kumar).

A very useless and unnecessary Indo-Pak dostaana sequence later, Raj finds out that the woman he kissed into (oops… bumped into) on a busy Swiss traffic intersection was the woman he flew all those miles for. Jeez, didn't someone give him a copy of the script? May be they did but he fell asleep half-way through it. Don't blame him one bit for it.

With the help of Jia's music teacher, Mrs. Smith (a very firangised Himani Shivpuri), Raj gets into the Oberoi household as a replacement for her who suddenly thought that she was too good an actress to dabble in something as meaningless as this. But she comes back when she realizes that the final sequence surpasses anything without meaning.

Performance-wise the movie rides on the shoulders of Kiran Kumar in the latter half. Otherwise, the movie does not ride at all. The songs are fairly decent, especially the doli le ke aaye hain… track. Where the film would falter at the box office is in the anonymity of its lead actors and the relatively low publicity of its release.
Share. Save. Connect.
Tweet
CHAND SA ROSHAN CHEHRA SNAPSHOT