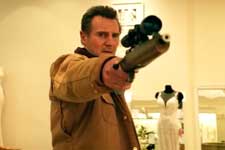 Punarvasu Pendse / fullhyd.com
EDITOR RATING
6.0
Performances
Script
Music/Soundtrack
Visuals
6.0
6.0
6.5
6.5
Suggestions
Can watch again
No
Good for kids
No
Good for dates
No
Wait for OTT
Yes
Cold Pursuit is a absurd film. It is very different from what the trailer makes you expect, is highly unpredictable, and is a far cry from the usual Liam Neeson revenge drama. To say that it almost feels like a spoof of some of Neeson's more famous work would not be an understatement. The movie opens with a line from Oscar Wilde ("some cause happiness wherever they go, others whenever they go") which initially feels, if not straight-up pretentious, very kitschy. By the end of the movie, however, you seem to agree that it fits in perfectly with the movie's over-the-top, pitch-black, and very ironic setting.

The movie is a remake of the Norwegian black comedy film "In Order of Disappearance", which was also directed by Hans Petter Moland. American screenwriter Frank Baldwin helps to bring the story from the wild winter mountains of Norway to mountainous Colorado, while trying to keep the essence intact.

Cold Pursuit begins with Neeson's Nels Coxman (cue immature jokes from the minor characters) being given the "Citizen Of The Year" award by the residents of Kehoe, Colorado. Only, this time he was not rescuing his daughter, but avenging his son, who was declared dead due to a heroin overdose. His wife Grace (Laura Dern), overcome by grief, leaves him and the movie immediately after the funeral. He almost takes his own life after that, but gets interrupted by his son's co-worker, who reveals that his son was killed by a crime cartel, which sets Coxman on a path of vengeance. He starts killing the lackeys of Denver crime boss and all-around psychopath Trevor "Viking" Calcote (Tom Bateman) in an attempt to reach the man who ordered his son's killing.

Viking lives by some kind of weird ethical code, treats his son like an experiment (gifting him Lord Of The Flies as a "life manual" and micromanaging his diet), and has a bunch of lovable hired goons that work for him. Unknown to Coxman, his killing spree sets a series of events in motion, leading to a turf war between the Viking's men and another rival gang headed by White Bull (Tom Jackson).

Death becomes a recurring theme as the two gangs and Nels Coxman get thrown together in a very visceral, very violent climax. It becomes a story of three fathers, all of whom get their sons involved in the mess in a very uncaring way, which, while adding a much-needed layer of depth to the story, also makes you root for none of them.

The story is kept tight-knit, yet it manages to focus on a lot of stuff beyond the lead character. The Viking's goons, for example, are shown in depth, each one with unique quirks that sets them apart from the usual gun-fodder that minor criminals are sometimes depicted as. Small oddities play a very important part in the final outcome of the movie, like the two Viking henchmen who are secretly in love but hide it from their boss.

The writing is genuinely funny at times, and some of the jokes hit you out of nowhere in a very good way. The humour is wry, absurd and rather bleak, save for some downright silly moments. The highlights are the intertitles, that legitimately get you to chuckle.

An amazing plot device that got carried over from the original movie is a small card after the death of each character with their name and faith. Initially slow and meaningful, these cards become more and more ridiculous as the body count starts piling up with each passing minute. What make these title cards more punchy are the ridiculous monikers adopted by the minor criminals, with names like Speedo, Limbo and Mustang.

The action is nowhere close to the humour - death seems uncomplicated and just a minor detail, that takes away from the gravity of the situation in most cases. Maybe that is intended, to further the comedy (and it succeeds as that as well), but the gunfights don't feel as well-written as the funny and sensitive bits of the film.

The movie is at its very best when it offers the rare moments of warmth. No matter how frigid the surroundings, or how bad things look, there is time to enjoy the smaller things in life. The script actually pauses before the climactic scene so White Bull's men can enjoy a frolicking in the snow - which is a very charming interlude between the surreal portrayals of death. The flight scene involving Viking's young son and Coxman is also a fantastic example of the same.

On the flip side, the script flatly struggles to portray any fleshed-out characters. A lot of the deaths would be more shocking (and some more funny) if the film had taken its time to arrange interactions between established characters instead of just shoving them in the audience's faces near the end of the movie. It also makes light of violence in a way that is inconsistent with real life - being physically assaulted looks and feel worse than being dead.

Liam Neeson plays the role of a tight-lipped man who goes from being a model citizen to a cold-blooded murderer in pursuit of vengeance, and is the spot of bother that keeps you thinking throughout the movie. Neeson compared this futility of revenge to a real life incident 40 years ago where he set out to avenge a white friend's rape by wanting to cosh (bludgeon) a black man when he found out that the assailant was black. Even though he may not have killed, or even fought, anyone, the fact remains that anything by Neeson becomes a rather hard watch now.

The other cast members do a great job, especially in the comic bits. Emmy Rossum plays a Kehoe detective, and is limited by the script. Tom Bateman stands out for his fantastic comic timing, and pulls off the "ridiculous, and ridiculously evil" part perfectly. One problem with the lack of fleshed-out characters is that there isn't much to speak of characters when the most memorable parts of their performances are their deaths.

Cold Pursuit has its moments - it makes you laugh, it makes you feel, and it makes you not give a damn about things. But it also has very little character development, poorly handled action, and a generally ham-fisted way of dealing with death. Couple that with Neeson's unnecessary personal disclosure to promote the film, and it makes for a very weird experience. If you really love black comedy, you will probably enjoy the movie, but you most likely not missing out on much.
Share. Save. Connect.
Tweet
COLD PURSUIT SNAPSHOT

It has got great action sequences, a tinge of dark humor and an unconventional revenge story.

If you're a fan of the action genre, I'd recommend you this beautifully shot Liam Neeson actioner.

Cold Pursuit is unlike a typical revenge flick. It's more of an action drama than an action thriller, and even though there aren't too many twists and turns, the plot is kept alive by the stylish action, terrific performances and the beautiful snowy scenery.

I was kinda surprised to know that the director also made the original film, In Order of Disappearance. Yet to see that one but Cold Pursuit is a pretty solid entertainer, especially for fans of Liam Neeson's action movies.

Cold Pursuit, on the whole, is an entertaining action drama that speaks volumes about revenge without actually being too loud.

ADVERTISEMENT
This page was tagged for
Cold Pursuit english movie
Cold Pursuit reviews
release date
Liam Neeson, Tom Bateman
theatres list
Follow @fullhyderabad
Follow fullhyd.com on
About Hyderabad
The Hyderabad Community
Improve fullhyd.com
More
Our Other Local Guides
Our other sites
© Copyright 1999-2009 LRR Technologies (Hyderabad), Pvt Ltd. All rights reserved. fullhyd, fullhyderabad, Welcome To The Neighbourhood are trademarks of LRR Technologies (Hyderabad) Pvt Ltd. The textual, graphic, audio and audiovisual material in this site is protected by copyright law. You may not copy, distribute, or use this material except as necessary for your personal, non-commercial use. Any trademarks are the properties of their respective owners. More on Hyderabad, India. Jobs in Hyderabad.