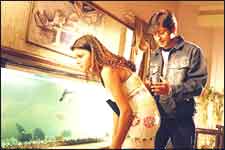 Himabindu Chitta / fullhyd.com
EDITOR RATING
1.0
Performances
Script
Music/Soundtrack
Visuals
NA
NA
NA
NA
Suggestions
Can watch again
NA
Good for kids
NA
Good for dates
NA
Wait for OTT
NA
Some films are unapologetically pornographic, and Timepass is one of them. This self-proclaimed "lust story" does a great job of being one.

Chopra plays the role of Jenny so convincingly that we begin to wonder if she is acting at all. Arjun Punj is far better off on the small screen, and should stick to it. Himani Shivpuri comes as a welcome relief, and even her comic over-action is better than the complete absence of acting from other quarters.

Needless to say, the plot exists only to facilitate the shedding of clothes by various characters, many of whom make moves on the heroine, and one of whom makes roaring moves on the hero! This completely inexplicable twist, added solely to up the movie's sleaze factor, is, well, just one of many. Fortunately, as we mentioned, the plot is entirely secondary.

The astute moviegoer will ignore the director's threadbare attempts to disguise the film's true character by throwing in such elements as Hindu-Muslim riots, safe sex and brutality towards women. All these, happily, do not take up more than two minutes of screen time. If only the movie itself lasted that long.

To call this movie cheap and vulgar would be to miss the point altogether. Relatives of the heroine (our condolences) and the perverted men of the nation will watch it anyway, but to all others, there are easier ways of dying.
Share. Save. Connect.
Tweet
TIME PASS SNAPSHOT

ADVERTISEMENT
This page was tagged for
taim paas movi hot
time to time pass hot movie 2005
Www time pass mona chopra full movie download.com
timepass a lust story movie download
Time Pass hindi movie
Follow @fullhyderabad
Follow fullhyd.com on
About Hyderabad
The Hyderabad Community
Improve fullhyd.com
More
Our Other Local Guides
Our other sites
© Copyright 1999-2009 LRR Technologies (Hyderabad), Pvt Ltd. All rights reserved. fullhyd, fullhyderabad, Welcome To The Neighbourhood are trademarks of LRR Technologies (Hyderabad) Pvt Ltd. The textual, graphic, audio and audiovisual material in this site is protected by copyright law. You may not copy, distribute, or use this material except as necessary for your personal, non-commercial use. Any trademarks are the properties of their respective owners. More on Hyderabad, India. Jobs in Hyderabad.