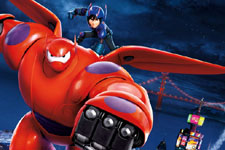 Swayamsrestha Kar / fullhyd.com
EDITOR RATING
7.5
Performances
Script
Music/Soundtrack
Visuals
7.0
6.0
7.5
8.0
Suggestions
Can watch again
Yes
Good for kids
Yes
Good for dates
Yes
Wait for OTT
No
Those who watched Hayao Miyazaki's masterpiece "My Neighbor Totoro" would remember Totoro as a gentle spirit of the forest and a gigantic hulk of a teddy bear, and an ideal companion for every kid who was faced with a world which grew dauntingly difficult to maneuver with each passing day. But more than that, Totoro was a symbol of the repose that was to be found in surrendering oneself to nature and to her bountiful resources of nourishment - both material and spiritual.

In Big Hero 6, you are introduced to Baymax - a healthcare robot designed by a college nerd - who encompasses, in his rotund, round body, all the promise of technological discourse as well as all the virtues which make us human (and which, in a way, form the true legacy of humankind).

Baymax (voiced by Scott Adsit) looks like a giant "balloon-man" (as one of the characters refers to him in the movie), and speaks as softly as a monk who rustles his way through the silent corridors of a monastery. His is the voice you expect to find in a laboratory wherein people bustle about trying to find out cures for terminal diseases, and not in the one which designs weapons of mass destruction.

This binary - technology as an agent of healing and as a weapon for wounding - is one of the major themes that drives the entire narrative of the film. The protagonist is a teenage boy called Hiro Hamada (Ryan Potter) who participates in illegal underground robot-fighting competitions, and specializes in making staggeringly destructive robotic machinery. His older brother Tadashi Hamada (Daniel Henney) is also a genius, who creates Baymax as part of his college thesis.

Both are residents of a futuristic city called San Fransokyo - a blend of an American and Japanese urban layout with cherry blossoms and pagoda-topped buildings co-existing with San Franciscan tramways and sloping roads.

Disaster strikes and Tadashi is killed at a science fair where Hiro has just unveiled his microbots. The boys had already been orphans, and Hiro is left all alone after the mishap.

One fine day, while rummaging around in his brother's room, Hiro accidentally activates Baymax - one only has to say "ow!" - and sensing that the boy is still raw with hurt at the loss of his brother, Baymax, the balloon giant, the gentle marshmallow man, bends down and gives him a hug. Damn Disney! Why you make us cry like this?!

Moving on, Hiro discovers that someone had been secretly using his microbots for a covert project. He pursues the shady conductor of this experiment - a man in a creepy Kabuki mask.

His friends are all nerds like him - a chemistry student called Honey Lemon (Genesis Rodriguez); a compulsive neat-geek called Wasabi (Damon Wayans Jr.); an edgy alt-lib girl called Go Go (Jamie Chung); and an obsessive fanboy called Fred (T. J. Miller), who looks like the average homeless guy but lives in a multi-tiered mansion with an Alfred-esque butler.

In his quest to avenge his brother's death, Hiro "upgrades" Baymax by fitting him out with a Kevlar suit - the initial design was that of a samurai warrior's armour, and the later upgrades result in a suit which is more Iron Man and less Kung Fu Panda. The suit even enables Baymax to detach his arm and send it flying at the enemy like a titanium hand of God which descends from the heaven like the wrath of the gods.

And yet, Baymax, fitted out like a war machine all by himself, peers inquisitively at a butterfly which has just alighted on his armoured hand, and almost follows its trail like an eager puppy.

The visuals are stunning and incredibly detailed - you can discern the thin layer of dust on Hiro's helmet after the building around him has been razed to the ground in a volley of explosions.

The action sequences have been tightly choreographed, but the scenes where a bumbling Baymax gets stuck in doorways and in general makes a fool of himself while still exuding an air of child-like innocence, are the most fun to watch.

Although the story is as old as Disney (an orphaned kid who has a special gift teams up with a lovable side-kick and overcomes impossible odds), and might have been entirely forgettable had the cast been limited to just Hiro and his friends, the presence of Baymax, and the surprisingly mature handling of Hiro's untamed angst (which even threatens to burst into ugly, bitter vengeance at one point in the film) makes this movie worth watching.

Do take your kids to watch this one. They need their Totoros and their Baymaxes.
Share. Save. Connect.
Tweet
BIG HERO 6 (3D) SNAPSHOT 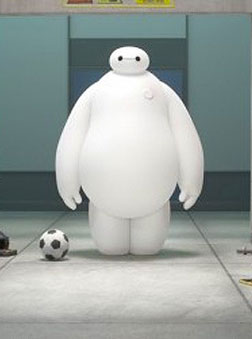 ADVERTISEMENT
This page was tagged for
Big Hero 6 (3D) english movie
Big Hero 6 (3D) reviews
release date
Ryan Potter - Hiro Hamada (voice), Scott Adsit - Baymax (voice)
theatres list
Follow @fullhyderabad
Follow fullhyd.com on
About Hyderabad
The Hyderabad Community
Improve fullhyd.com
More
Our Other Local Guides
Our other sites
© Copyright 1999-2009 LRR Technologies (Hyderabad), Pvt Ltd. All rights reserved. fullhyd, fullhyderabad, Welcome To The Neighbourhood are trademarks of LRR Technologies (Hyderabad) Pvt Ltd. The textual, graphic, audio and audiovisual material in this site is protected by copyright law. You may not copy, distribute, or use this material except as necessary for your personal, non-commercial use. Any trademarks are the properties of their respective owners. More on Hyderabad, India. Jobs in Hyderabad.