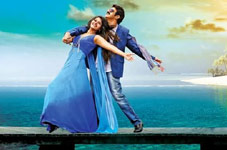 Ravi Kandala / fullhyd.com
EDITOR RATING
4.0
Performances
Script
Music/Soundtrack
Visuals
4.0
2.0
5.0
6.0
Suggestions
Can watch again
No
Good for kids
No
Good for dates
No
Wait to rent it
No
If we knew a lawyer, we would take him to director Suresh Krishna today. We would then initiate proceedings to purchase the script of Baasha from him. And once we do that, it would roughly take us one year to make it to the cover of Forbes as the richest person in India. How? By suing every Telugu producer who rehashes the script and makes similar movies.

After watching Dictator, we really wondered if the directors and producers don't get bored of making the same story. And if Balakrishna, who's starred in at least 20 such stories since Samarasimha Reddy, is not bored to death of the template. And if the audiences who still cheer his dialogues lustily don't get bored of watching the same thing again and again and again.

Dictator's story follows the Basha pattern without deviating even one teensy weensy bit. Chandu (Balakrishna) is an employee in a supermarket leading a peaceful life with a loving family in a colony filled with comedians doing weird things passing off as comedy. While saving a girl Indu (Sonal Chauhan) who lives in his colony, Chandu makes some powerful enemies.

Come interval, you are told that Chandu is not who he is and is in fact Chandrasekhar Dharma (the Chairman of the Dharma Group of Industries). Post-interval, there is a flashback that reveals who he is and why he is living a life of anonymity. And his love story with a humble poor girl, Katyayini (Anjali). At the end of the flashback, the villains make a comeback, and Chandu kills them and lives happily ever after with his family.

Into this mix, throw six songs - hero introduction song, duet with young girl imagined by comedians, item song, two duets with main heroine and one song exhorting the virtues and qualities of the hero that plays out in the background while the hero does heroic things. Add around six ultra-violent fights where the hero kills at least 100 people without so much as a hair falling out of place. And you have your Balakrishna movie ready to be released to a gullible audience who will forget the festival at home and flock to theatres like sheep to mass slaughter.

Dictator is so old-fashioned, it is tough to imagine how a young director like Sriwass made it. The sensibilities in the film are straight out of a Dasari Narayana Rao movie from the '70s while the comedy is straight out of an ultra-low budget EVV movie from the '90s. Everyone in the film (with the exception of Sonal Chauhan and Anjali who obviously had their own makeup crew) wears too much makeup and a hideous wig, and overacts. The movie has way too many villains including Rati Agnihotri who does not even make an effort to lip sync.

Balakrishna acts like he always does, but it is time for him to do something different or hang up his boots. 30-years Prudhvi who's been on a winning streak recently fails to salvage the comedy department and only succeeds in irritating you.

The only song worth mentioning is the Sonal Chauhan one - worth mentioning for the amount of skin Chauhan willingly shows even in a Balakrishna movie. The music is quite contemporary and out of place in a story like this. The film is shot lavishly and the producers clearly spared no expense - unfortunately for them, they are not likely to get much of it back.

Stay away from Dictator and wait for Balayya's 100th film. Hopefully, that will not be yet another rehash of Baasha.
Share. Save. Connect.
Tweet
DICTATOR SNAPSHOT 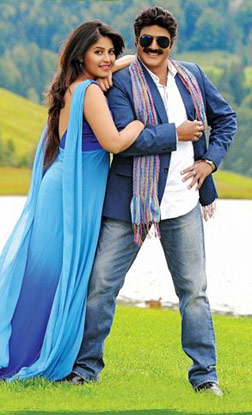 See Dictator full details
TOP COMMENT
Dick taker on 14th Jan 2016, 7:53pm | Permalink
Star wars was reviewed by a fan boy who couldnt resist the nostalgia it generated.
4
0
DICTATOR USER REVIEWS
1 - 4 OF 4 COMMENTS
POSITIVE  |  NEGATIVE |  NEWEST  |  OLDEST  |  MOST HELPFUL  |  LEAST HELPFUL
USER RATING
3.0
1 USER
Performances
Script
Music/Soundtrack
Visuals
NA
NA
NA
NA
Can watch again - NA
Good for kids - NA
Good for dates - NA
Wait to rent it - NA
Raj on 15th Jan 2016, 9:27am | Permalink
Its disappointing seeing full hyd not reviewing small films like express raja bhalemanchi roju abbaitho ammay and so on....its very disrespectful to all those involved in those movies
rahulsachinsourav123 on 15th Jan 2016, 11:41am | Permalink
Completely agree. It is very very disrespectful as some of the best movies in recent movies came from small time makers and small time heroes and not paying attention to them could be discouraging to them also. This apathy is least expected from fullhyderabad.
dictaTHOR on 14th Jan 2016, 10:53pm | Permalink
Its not suresh krishna for Basha.its Mukul Anand for HUm
Honestman on 14th Jan 2016, 7:09pm | Permalink
Surprising to see the reviewers complaining about the story and the low ratings.

This same site has given 10/10 for Start Wars which has always followed the same storyline (dark side builds an equipment to destroy the universe and the light side end up destroying it at the end of the movie). Hypocrisy at it's peak.
Ravi Kandala on 15th Jan 2016, 8:04pm | Permalink
A road side sewerage running furiously cannot be compared to Nayagara although both are made up of the same thing. the water.
Honestman on 16th Jan 2016, 6:05am | Permalink
You totally lost the point, I never asked you to compare the two. You would eventually get bored of Niagara (not Nayagara) if you see it over and over again. My point is don't hold prejudice be honest.
fullhyd.com on 16th Jan 2016, 9:05am | Permalink
@Honestman: That above comment was not by the original reviewer of the same name :).
Dick taker on 14th Jan 2016, 7:53pm | Permalink
Star wars was reviewed by a fan boy who couldnt resist the nostalgia it generated.
Dick taker on 14th Jan 2016, 6:41pm | Permalink
How did the makers come up with a title like dictator? Surely the title is meant to showcase balayya's power and mass image, but there are no good dictators in history....hussein,hitler,mussolini,kim jong all left scars on people they ruled for geberations...those guys are called dictator..surely balayya babu is just a good guy with a good heart but a nasty temper...he should not be called a dictator..btw mention the words sonal chauhan and my pants get a bit tight in a specific area...gawd she is hot
LEAVE A COMMENT
fullhyd.com has 700,000+ monthly visits. Tell Hyderabad what you feel about Dictator!
MORE MOVIES
Latest Reviews
Satyameva Jayate 2
Ghostbusters: Afterlife
Eternals
Eternals (Telugu)
Eternals (Hindi)
more
Dune
Venom: Let There Be Carnage
No Time To Die - Telugu
No Time To Die - Hindi
No Time To Die
SR Kalyana Mandapam
Ippudu Kaaka Inkeppudu
Thimmarusu
Kadhanika
Shukra
Contemporary Reviews
Soggade Chinni Nayana
The Hateful Eight
Kyaa Kool Hain Hum 3
Airlift
Saala Khadoos
more
Seethamma Andalu Ramayya Sit...
Mastizaade
Express Raja
Nannaku Prematho
Our Brand Is Crisis
Daddys Home
Wazir
Point Break (3D)
Nenu Shailaja
Random Reviews
Police Kartavyam
Repallelo Radha
Road
Enjoy
Basic Instinct 2
more
Ankahee
Gudumba Shankar
A Wednesday
Ninja Assassin
Dil Toh Baccha Hai Ji
Businessman
Zero Dark Thirty
The Wolf Of Wall Street
Nene Raju Nene Mantri
Alita Battle Angel (Hindi)
SEARCH MOVIES
Dissatisfied with the results? Report a problem or error, or add a listing.
ADVERTISEMENT
SHOUTBOX!
{{todo.name}}
{{todo.date}}
[
ip{{todo.ip}}
]
{{ todo.summary }}... expand »
{{ todo.text }} « collapse
First  |  Prev  |   1   2  3  {{current_page-1}}  {{current_page}}  {{current_page+1}}  {{last_page-2}}  {{last_page-1}}  {{last_page}}   |  Next  |  Last
{{todos[0].name}}

ADVERTISEMENT
This page was tagged for
dictator telugu movie movie
Dictator telugu movie
Dictator reviews
release date
Nandamuri Balakrishna, Anjali
Follow @fullhyderabad
Follow fullhyd.com on
About Hyderabad
The Hyderabad Community
Improve fullhyd.com
More
Our Other Local Guides
Our other sites
© Copyright 1999-2009 LRR Technologies (Hyderabad), Pvt Ltd. All rights reserved. fullhyd, fullhyderabad, Welcome To The Neighbourhood are trademarks of LRR Technologies (Hyderabad) Pvt Ltd. The textual, graphic, audio and audiovisual material in this site is protected by copyright law. You may not copy, distribute, or use this material except as necessary for your personal, non-commercial use. Any trademarks are the properties of their respective owners. More on Hyderabad, India. Jobs in Hyderabad.