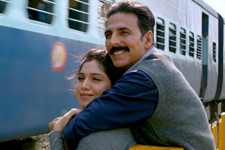 Josh / fullhyd.com
EDITOR RATING
7.0
Performances
Script
Music/Soundtrack
Visuals
8.0
7.0
7.0
7.0
Suggestions
Can watch again
No
Good for kids
Yes
Good for dates
Yes
Wait for OTT
No
Toilet: Ek Prem Katha (TEPK), in case you haven't watched the trailer, is about Keshav (Akshay Kumar), a brahmin cycle shop owner in UP who falls in love with and marries an educated girl Jaya (Bhumi Pednekar) only to bring her to a home which has no toilet. The womenfolk of the village wake up early and journey to the outskirts to relieve themselves before the sun rises. Jaya bluntly refuses to humiliate herself in this manner and, upon Keshav's consistent failure to provide her with a more dignified option, leaves for her mother's home. This stirs up the rebel in Keshav who has to confront not just the people of his village but his own super-conservative father in order to build a toilet in his household.

We have to talk about two films to place TEPK in context. The first being Joker, a Tamil social drama released last year, because it, too, tells the story of a loving couple where the wife insists on having a toilet at home. Joker, although it's classified as a political satire, is a tragedy. A grim representation of how public service delivery lacks any humanity in our country. It's a tad too real for comfortable multiplex viewing and, powered with a beast of a performer in Guru Somasundaram, can make you feel a blow in the gut by the time you walk out. The film won a National Award but is practically forgotten now.

The other film relevant here is Dangal, the biggest blockbuster India has seen. The thematic similarity is for having a superstar give way to women and women's empowerment thereby managing to sugarcoat the bitter pill. But how authentic is the film? Does Fatima Sana Sheikh with her fair skin, petite body and convent schooling look or behave anything like the darker, buffer and decidedly Haryanvi Geeta Kumari Phogat? Was Mahavir Phogat the kind of sweet dad who'd never raise a hand on his girls? Did he run into trouble with the national coach and did he get locked up when his daughter was winning the Commonwealth gold? Does the negative answer to all these questions in any way diminish its appeal to the public?

The three films, in our opinion, form a modality spectrum that is worth going into. With grim tragic realism on one end and fictionalised triumphalism at the other, we understand the spectrum of socially conscious cinema that Toilet: Ek Prem Katha belongs to. It's fictionalised by all means. We know right when the film is announced that Keshav will finally get a toilet for Jaya - there's no going around it. But the film takes its time and its (large) share of obstacles before it gets there.

When your final victory is something as basic as a toilet, your obstacles better be compelling enough. That's something the editor-director Shree Narayan understands well. He spends much time building each of Keshav's attempts to give some dignity to Jaya's unarguably basic needs, and he lets each attempt fail right in your face. The film won't let you feel comfortable in your seat being convinced that Jaya is a fictional person in a far away land. There's some unsophisticated but excellent filmmaking involved in how you manage to relate to her trouble even if you've got the whitest and shiniest of commodes to run to in the intermission of the film.

This effort on the part of the filmmaker is well validated by the performances of Bhumi Pednekar, Akshay Kumar and Divyendu Sharma (as Keshav's sidekick) of conviction. They all seem to believe in what's happening, and that's good enough sometimes. Like we commented in the earlier paragraph, the filmmaking is rather straightforward but compelling, which means the visuals and the music are probably not things you'll revisit later on (although Has Mat Re Pagli is a bit of an earworm), but they serve the narrative very well.

The only thing is, unlike Joker and Dangal which both stir up deep emotions by the time they finish, Toilet: Ek Prem Katha ends up being a film you'll applaud and likely soon forget. There's a sincere attempt at poking at people's conscience and also sugarcoat it with humour and triumph, but the reconciliation of these two opposite ends is an exercise that needs more than has been afforded. You may forget it eventually, but for now you're likely better off applauding it in the halls.
Share. Save. Connect.
Tweet
TOILET - EK PREM... SNAPSHOT
TOILET - EK PREM KATHA SNAPSHOT 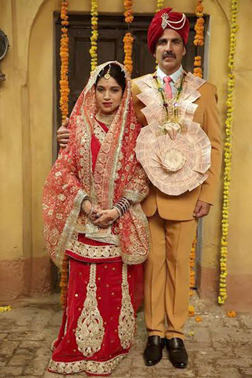 ADVERTISEMENT
This page was tagged for
Toilet - Ek Prem Katha hindi movie
Toilet - Ek Prem Katha reviews
release date
Akshay Kumar, Bhumi Pednekar
theatres list
Follow @fullhyderabad
Follow fullhyd.com on
About Hyderabad
The Hyderabad Community
Improve fullhyd.com
More
Our Other Local Guides
Our other sites
© Copyright 1999-2009 LRR Technologies (Hyderabad), Pvt Ltd. All rights reserved. fullhyd, fullhyderabad, Welcome To The Neighbourhood are trademarks of LRR Technologies (Hyderabad) Pvt Ltd. The textual, graphic, audio and audiovisual material in this site is protected by copyright law. You may not copy, distribute, or use this material except as necessary for your personal, non-commercial use. Any trademarks are the properties of their respective owners. More on Hyderabad, India. Jobs in Hyderabad.