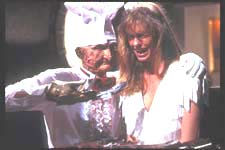 Still no? Okay, Vicky Gunjanna is none other than Freddy Kruger, morphed and otherwise done to Telugu. If you've collapsed laughing, we commiserate and give you until the next paragraph to recuperate. If you've instead gone Freddy who, then you're obviously not as horror-savvy as you should be, are you? Well, Freddy Kruger is the famous nightmare man of the 'Nightmare On Elm Street' series. It must have gotten even more difficult for him to sleep at nights after knowing what he's being called now.

Anyway, getting back to business, this movie is the first part of the series, dubbed in Telugu. And how.

The main lead, Heather Langencamp, is called Jhansi (hyuk hyuk hardi har har, er, sorry), and her boyfriend - none other than a very young and puffy-haired Johnny Depp, who in the recent years has made a successful career out of the elusive art of non-acting - is called John (thank goodness for small mercies).

The plot is brain-numbingly simple. Freddy/Vicky, whom we shall call Freckly for convenience, attacks teens in their nightmares. If they die in their sleep, then they are dead in real life too. Freckly has a score to settle with their parents, hence the rampage. So here's the diary.

Death 1
Person murdered: A teen girl, slashed to death by an assailant who looks like a scarecrow, only better (made possible with the highly imaginative art of sticking bits of flesh, tackily, on the face of the protagonist). Pretty predictably, this is how the movie starts.
Mode of murder: Sharp talon like objects attached to tattered gloves.
Time of death: After the mandatory sex scene.

Death 2
Person murdered: Boyfriend of victim number one, imaginatively called Raja, who is cooped up in a cell accused of her murder.
Mode of murder: A particularly scheming bed sheet that coils around his neck, forms a noose and hangs him to death.
Time of death: Sorry, there are no clocks in jail cells.

Death 3
Person murdered: Johnny Depp!
Mode of murder: Swallowed by his own bed - what worse form of treachery? And this while listening to Yesudas. The mode results in a mushroom cloud of blood, which causes the ceiling to resemble the insides of a ketchup bottle.
Time of death: Just when you are beginning to wonder what exactly Depp is supposed to be doing in the movie.

So going by the equation 4 - 3 = 1, we are left with the large-toothed, hirsute Jhansi, who takes on the huge task of getting Freckly into her nightmare and then annihilating him in reality. And she does it by setting up a booby trap (no, nothing on the lines of your current imagination) that very conveniently leads him to his end. Her very heartfelt and convincing utterances in the process, of "Devudaa, nannu rakshinchu!", make you really want to reach out and hold her hand.

Apart from this momentary involvement with the heroine, you are left pondering over the various oddities that keep springing onto the screen. For example, Freckly, who has the much-desired talent of walking through prison bars, suddenly finds himself behind closed doors when the heroine slams the door on his face (or what's left of it), and this makes you lose some of any respect you might have picked up along the way for him. More like these, but let's conserve space.

So? Oh well, at the end of the day all I can say is that an '80s flick is best watched in the '80s itself. Particularly a horror flick. Yet, this movie was a cult classic. So if you are a Wes Craven fan, have an afternoon to destroy, and don't mind outrageous Telugu dubbing, then you can still go right ahead and be a part of The Elm Street Nightmare. The rating is for this version, not for the original.
Share. Save. Connect.
Tweet
BOOCHAADU SNAPSHOT

Well, Sam! While i appreciate your concern for sanctity & chastity of the site and "moral ethics", I feel sorry for your not having comprehened what is purported....to quote Shakespeare: "read not what is written, read what not is written"...To that matter, for most of the thousands that you're really worried about, it is invaluable wisdom that artice 375, IPC Sec is 'what you don't want to hear'....and yes! it is certainly asking for too much of me not to write what i feel about something...After all, India is a free country and its my constitutional right to "freedom of expression"..

RATING
2
Sam on 29th Aug 2001, 8:43pm | Permalink
Siddharth- What the hell do you mean when you say ""When Rape Is Inevitable, Enjoy It" ? These kinds of statements are downright offensive and vulgar. Just because you have an opportunity to post something on the web it doesn't mean you can write whatever you want. Please exercise judgement when you post something that is seen by thousands or is this asking too much of you?
RATING
4
Siddharth Angara on 29th Aug 2001, 5:48pm | Permalink
The write-up on the movie - Boochaadu - is really appreciable! Apparetnly, the movie seemed to have 'breached article 375, under IPC Section - Rape (of audience and natural self)'!!..No point shedding tears on the virginity that's lost irretrievably....So, the Moral is: "When Rape Is Inevitable, Enjoy It"!!!..
RATING
10
Chetan Shrehta on 28th Aug 2001, 5:16pm | Permalink
this review is the funniest thing so far on nightmare....street.it's absolutely fuun.good job
RATING
6
Sonali Dalal on 28th Aug 2001, 1:14pm | Permalink
it was cool .
RATING
6
Ceasar D'Great on 27th Aug 2001, 5:40pm | Permalink
As evident not only is the review better than the movie is worhtwhile spending a few bucks reading it than spend some watching it and nice vocabulary too. Whoever wrote it should have added " Watch at your own risk or be smart enough to drive down to the nearest pub and drown urself in merry ale."
RATING
2
Aditya Anand on 26th Aug 2001, 7:44pm | Permalink
i think the review was better than the original english

ADVERTISEMENT
This page was tagged for
Boochaadu telugu movie
Boochaadu reviews
release date
Heather Langencamp, Robert Englund
theatres list
Follow @fullhyderabad
Follow fullhyd.com on
About Hyderabad
The Hyderabad Community
Improve fullhyd.com
More
Our Other Local Guides
Our other sites
© Copyright 1999-2009 LRR Technologies (Hyderabad), Pvt Ltd. All rights reserved. fullhyd, fullhyderabad, Welcome To The Neighbourhood are trademarks of LRR Technologies (Hyderabad) Pvt Ltd. The textual, graphic, audio and audiovisual material in this site is protected by copyright law. You may not copy, distribute, or use this material except as necessary for your personal, non-commercial use. Any trademarks are the properties of their respective owners. More on Hyderabad, India. Jobs in Hyderabad.