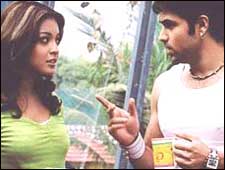 Ghazala Rizvi / fullhyd.com
EDITOR RATING
5.0
Performances
Script
Music/Soundtrack
Visuals
NA
NA
NA
NA
Suggestions
Can watch again
NA
Good for kids
NA
Good for dates
NA
Wait for OTT
NA
Some flicks are essentially made to encourage people to escape the boredom of the second period and its following classes at college. Aashiq Banaya Aapne fits the bill perfectly - if the number of college kids sporting the John Abraham hairdo and their companions carrying themselves in JLo's low pants at the theater are anything to go by.

Aashiq Banaya Aapne starts abruptly with three people being taken across the corridors of a hospital, almost on their deathbeds - then, it moves into the flashback. Nothing complicated, but essential to make you sit through the story (this time, the producers are not taking any chances).

Karan (Sonu Sood) and Sneha (Tanushree Dutta) are college friends, and together they have a reciprocal appreciation pact - Karan writes nonsensical limericks while Sneha takes to abstract photography. Vicky (Emraan Hashmi) is an old friend of Karan, and goes by the reputation of a steamy Casanova. He also appears to have connections with the underworld, and a passing reference is made to a cache of drugs. This, coupled with the hospital scene, is expected to make you churn your gray cells. In the meantime the three (in various permutations with each other) mouth a couple of snazzy numbers.

Sneha and Vicky fall in love while Karan heaves sighs of passion in the backdrop. In this amiable love triangle, where all three coordinates love each other to varying degrees, Karan plays the sacrificial goat. With promises of serving as the best man at their wedding, he lets himself be sidetracked. Soon enough, we see Vicky getting off his orange pants and doing his mandatory in-her-bed number with Sneha.

From here on, the movie gets onto gear 4. A lot of things happen - Vicky is discovered in another woman's bed, and drugs are discovered in his. He lands in jail, and Karan lands with Sneha. On their (Karan and Sneha's) engagement day, Vicky comes back with a vengeance. In the ensuing tussle, all three manage to earn a few scratches. This is where the flashback ends with a phish. That's it, there's nothing more - except for a very slight twist, that's being deliberately left out of this review to give the movie a fighting chance.

Hashmi's unwashed appearance always triggers off anticipation of under-the-sheet scenes to follow, something akin to what Pavlov's dog might have felt every time the bell rang - food, drool, food. After Murder and Zeher, Emraan has improved upon his acting, especially the kissing part of it.

Sonu Sood, as Karan, contrasting well with Emraan's Vicky, has secured a place for himself in better movies to come. Tanushree, with cute looks, long legs, kissing prowess and other assets, is insurance enough for Aashiq Banaya Aapne.

With the music not keeping up with the trademark soulful numbers of Emraan's other flicks, the movie appears stranded. Another major flaw in the script is the abrupt ending, leaving quite a few unanswered questions. But it will neither glare out at you harshly, nor even claim your attention too much. Unless you really dislike Hashmi, Aashiq Banaya Aapne is good time-pass.
Share. Save. Connect.
Tweet
AASHIQ BANAYA AAPNE SNAPSHOT