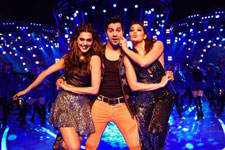 T J Reddy / fullhyd.com
EDITOR RATING
4.0
Performances
Script
Music/Soundtrack
Visuals
6.0
2.0
3.0
8.0
Suggestions
Can watch again
No
Good for kids
No
Good for dates
No
Wait for OTT
Yes
I have a confession to make. I have to admit I was wrong. Yes, the skies have turned black and the oceans have turned blood red. I sort of enjoyed Judwaa 2. TJ, the bastion of picking apart nonsensical and regressive comedies, likes bloody Judwaa 2. How is this possible? What does it all mean?

Well, I'll use a pro-wrestling analogy to explain. In the world of wrestling, the general sentiment is that you as a performer have to connect to the crowd. Because a raucous crowd can make a bad match good, a good match great and a great match a 5-star classic for the ages. My experience with Judwaa 2 was similar to the first of these three scenarios. With a partisan crowd comprised of people who genuinely enjoyed the film and people who were there to mock the film and get their kicks cheering it ironically, a cascade of great vibes was created even as the first anti-smoking disclaimer showed up on screen.

Director David Dhawan may have known this would be the crowd response when he chose to remake his 1997 "classic" Judwaa, by casting his son (most-punchable-face magazine cover boy) Varun Dhawan. And even if you have no emotional bond with the original Judwaa and or a smidgen of fan sympathy for Salman Khan and his work, or any soft corner for Nagarjuna's 1995 "classic" Hello Brother, you'd still likley be like the clueless grownups around me who were more than content with letting a child under the age of 10 watch a film full of sexuality bordering on abuse, twin powers that appear and disappear as and when it's convenient to the plot, and a nonsensical story which may have hampered the development of my brain, since it is still a film brimming with light and enjoyable performances and characters.

For those of you who don't know, the plot revolves around newborn twins (who have special twin powers bestowed to about two in 8 million) being separated at birth. One grows up with rich parents, and the other at the cleanest slum ever known to man. Because we are 20 years removed from the original Judwaa, the film gets a production upgrade as the location changes to London. Here we follow the slapstick hijinks and romantic escapades of Raja and Prem as they are destined to inevitably meet each other and beat up a few nameless goons because "commercial" cinema.

Because this sequel (which should be classified as remake) follows the same plot line, the issues with the original remain with this one as well. The massive elephant in the room plaguing the movie's overall appeal is the fact that its story has been subject to the horrible ravages of time. While the original Judwaa was a product of its time where the excuse "we didn't know better in the '90s" is viable to a few apologists, we are 20 years removed from the mid-90s. Spanking ladies willy-nilly, kissing them and their mothers without their approval, grabbing crotches, and repurposing hit songs and a script dusted off and unchanged does not fly as well as it used to.

Trying to salvage this misguided attempt at '90s nostalgia is the leading man who leads with his abs, Varun Dhawan. He, by far, is the best part of the film. While foraying through the avenues of comedy, action and the movie's idea of romance, he never drops his head and stops his attempts at sending the audience home happy. The actors around him have no room to flex their acting chops for one of two reasons:

a. some of them have none - I'm looking at you Miss Fernandez
b. the writing is so wafer thin that beloved character actor Anupam Kher is reduced to being a sweater on screen and the talented Tapsee (I have a lot of questions to ask you) Pannu regresses to her Mogudu and Chashme Badhhoor days

Piling questions onto my questionnaire are the three music directors who were commissioned to score the film. The primary one I want to pose to them is "How did you come to the conclusion that a film needed four different item songs and not much else?" While they ponder the answer to that, I would like to extend my commendations to Ayananka Bose - the main who never fails to make the films he shoots look as gorgeous as its stars.

As I mentally composed this review on my ride back from the cinema, one specific aspect stood out like a sore thumb. Through all the questions, gripes and positives, the fact that the raucous crowd was gone dawned on me. As I replayed the film in my head, the jokes seemed less funny and more offensive. The women seemed less sexy and more air-headed. The movie's high appeal slammed to the ground with a thud as loud and sickening as the movie itself. This is not a good film. PSYCH, TJ and his undying bellow for quality cinema have not changed much like the film's rinse-and-repeat story.

There is part of me that wants these filmmakers to learn their lesson that movies like these don't work in this day and age. Like Tubelight, Jab Harry Met Sejal and A Gentleman before it, Judwaa 2 joins a long list of dated and unoriginal films. But if I were to go by the word of the hordes of fans who packed my theatre, unlike those aforementioned films, my predictions are on course to be proved wrong.

So to all you viewers out there who want to watch this film this long weekend, the only way to enjoy a movie like this one is to be a soul lost in a sea of rapturous applause by an audience who are cheering the movie inside out while forgetting their real lives for two and half hours. I pity the man who watches this one in a sparsely packed hall. I really do.
Share. Save. Connect.
Tweet
JUDWAA 2 SNAPSHOT 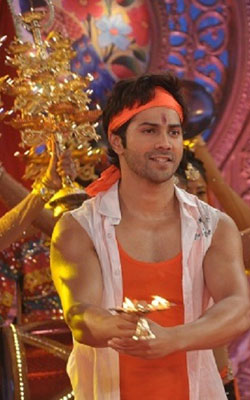 ADVERTISEMENT
This page was tagged for
judwaa 2 tamil movie in hindi
Judwaa 2 hindi movie
Judwaa 2 reviews
release date
Varun Dhawan, Jacqueline Fernandez
Follow @fullhyderabad
Follow fullhyd.com on
About Hyderabad
The Hyderabad Community
Improve fullhyd.com
More
Our Other Local Guides
Our other sites
© Copyright 1999-2009 LRR Technologies (Hyderabad), Pvt Ltd. All rights reserved. fullhyd, fullhyderabad, Welcome To The Neighbourhood are trademarks of LRR Technologies (Hyderabad) Pvt Ltd. The textual, graphic, audio and audiovisual material in this site is protected by copyright law. You may not copy, distribute, or use this material except as necessary for your personal, non-commercial use. Any trademarks are the properties of their respective owners. More on Hyderabad, India. Jobs in Hyderabad.