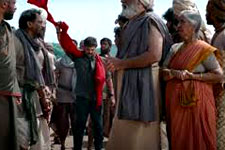 T J Reddy / fullhyd.com
EDITOR RATING
3.0
Performances
Script
Music/Soundtrack
Visuals
5.0
1.0
3.0
2.0
Suggestions
Can watch again
No
Good for kids
No
Good for dates
No
Wait for OTT
Yes
A not-so-fun fact about me is that I've been trying to shake a few extra kilos off my body for nearly a decade. Losing weight is easy when there's a lot of it. A good week of clean eating and drinking lots of water torches a lot of it clean off. As the number on the weighing scale begins to drop, the smile on one's cheek grows. It does seem all too easy.

Acharya is the newest offering from Tollywood's certified mega-hit machine, Koratala Siva. It stars Mega Star Chiranjeevi and Mega Power Star Ram Charan coming together to form a mega-powerful on-screen combo. The final product should be a bonafide good time based on the talent involved. It does seem all too easy.

"What ultra, mega, powerful, star-wattage-increasing story could bring this trio to the table?" you ask. We'll tell you, but first...

With weight loss, by the time the finish line turns up on the horizon, one needs a lot of discipline. A lack of discipline and a subsequent lack of results could lead to something of a spiral. In my case, gorging on delicious food is a release. Every time I stop seeing results, I stop feeling good. To make me feel better, I start to indulge a little and then a lot, and bingo-bango, we're at square one again.

Lost in a forest is this temple town named Dharmasthali. Its inhabitants dole out lessons about Dharma and Ayurveda like they were a cheap plate of pani puri. This town comes under the evil clutches of the evil Basava (Sonu Sood). Evil Basava does the bidding of evil Rathod (Jissu Sengupta). Evil Rathod is a businessman who wants to mine the forest around the holy place for precious metals. Wow, such evil, much terror.

Good Acharya (Chiranjeevi) walks into town to combat these forces of evil and saves every single one of the good people in town. Wow, such good, much happiness.

I genuinely wish I had more to say about the plot, but you'd be hard-pressed to squeeze another word out of me. "What of the emotional story?" you ask again. I wouldn't want to spoil a never-before-seen post-interval flashback segment. It acts as the emotional axis of the story - he said with all the sarcasm in the world. So, please do watch the film to find out more.

Koratala Siva isn't a bad filmmaker. He isn't reinventing the wheel with any of his films. He takes a well-worn wheel, changes its tube and tyre, and sets it in motion. Who doesn't love a smooth ride on some new tyres? One could trace the traversal of most of the director's wheels to Chiranjeevi's films from his heyday.

The issue with Acharya is that Chiranjeevi isn't in his heyday anymore, and Koratala Siva, in admiration of an idol, forgot to change the tyre and tube on his soon-to-disintegrate wheel.

If bringing this talent pool together was the easy part of getting the movie going, the results stall with its script and narration. Once the on-screen results come to a halt with an ear-shattering screech, Siva's bad habits take over. Well-worn scene after well-worn scene plays out on-screen to deafening silence from a crowd aching to see a wholesome movie starring their beloved Mega Star.

We don't need to explain everything wrong with the scenes and sequences in this film. We've expressed these gripes in a million different ways and a million different songs. The distillation of these reviews would amount to us weeping at our keyboards with each review.

We ask ourselves, "Why do we trust big star vehicles after being burnt by them almost every time?" Is one RRR worth a year of hurt?

Overpowered heroes, one-note bad guys, a non-factor female lead, stupid moral lessons which fall apart with one retort, and a lack of creativity are all here. The film is so paint-by-numbers that it lacks larger-than-life shots to showcase its larger-than-life actor.

Chiranjeevi is decent in his role. It is a role he would play in his sleep and wake up hoping it was a bad dream. Ram Charan is fine as his character, too. He'd play it in his sleep, wake up, and ask himself why he chose a terrible project after every career high. As for everyone else, they're there. It is emblematic of many of our days in college - we were physically present but mentally checked out. We mentally checked out of our classes on the count of them lacking an inspiring touch - we could say the same about the actors and the script they're enacting. Acharya's life lessons aren't all that inspiring.

An uninspiring script has a wholly uninspired soundscape and some awful production design. While the set of the temple town seems impressive at first, it lacks a sense of purpose and personality. Dharmasthali is supposedly a town in ruin - however, it is well-kempt and shiny at every turn. The visual world-building seems to be as much of an after-thought as the writing of Kajal Agarwal's role in the film. Who'd notice it, right? A special mention goes to the atrociously staged final fight scene where Acharya seems to be fighting in the middle of nowhere. A truly terrible bit of VFX work.

Many fans might assume that reviewers find joy in ripping a film like this to shreds. On the contrary, and on a personal note, it genuinely hurts to write negative reviews for any film.

Be it Chiranjeevi or any of his contemporaries, a generation grew up on their movies, and would love to see them do good work. When a terrible film comes about, it shows that these actors might not be as good as they once were. It is a reminder of that sense of childhood wonder slowly dissipating. If I fell in love with cinema on the power of their work, seeing them fail is a tough pill to swallow.

But like with my weight loss, I hope that the Mega Star's cycle of bad films breaks, and that we see him get back up on the horse and work on something special. Hope is a good thing, the best of things. 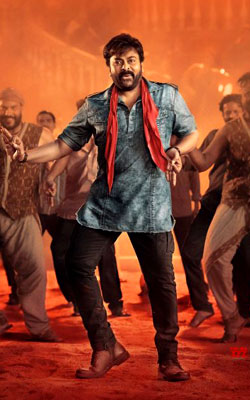 See Acharya full details
ACHARYA USER REVIEWS
1 - 1 OF 1 COMMENTS
POSITIVE  |  NEGATIVE |  NEWEST  |  OLDEST  |  MOST HELPFUL  |  LEAST HELPFUL
Madhu on 1st May 2022, 3:36pm | Permalink
If I fell in love with cinema on the power of their work, seeing them fail is a tough pill to swallow
True words- as a die hard fan of Chiranjeevi , it hurts to see such movies
Watching the movie at exactly midnight in a foreign country- was thinking of the disappoint awaiting all the fans who would be watching it on the first day.
Good or Bad Movies- I am at least happy that I have your reviews to look forward to.
TJ Reddy on 2nd May 2022, 7:15am | Permalink
Thanks for the support, Madhu. Always appreciated.

And I do definitely relate with you. I might never have been a huge Chiranjeevi fan but I do love a lot of his films. They are very integral to the Telugu cinema landscape.

ADVERTISEMENT
This page was tagged for
Acharya telugu movie
Acharya reviews
release date
Chiranjeevi, Ram Charan
theatres list
Follow @fullhyderabad
Follow fullhyd.com on
About Hyderabad
The Hyderabad Community
Improve fullhyd.com
More
Our Other Local Guides
Our other sites
© Copyright 1999-2009 LRR Technologies (Hyderabad), Pvt Ltd. All rights reserved. fullhyd, fullhyderabad, Welcome To The Neighbourhood are trademarks of LRR Technologies (Hyderabad) Pvt Ltd. The textual, graphic, audio and audiovisual material in this site is protected by copyright law. You may not copy, distribute, or use this material except as necessary for your personal, non-commercial use. Any trademarks are the properties of their respective owners. More on Hyderabad, India. Jobs in Hyderabad.