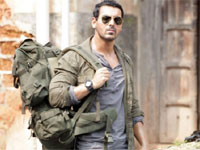 Zehra Abbas / fullhyd.com
EDITOR RATING
4.0
Performances
Script
Music/Soundtrack
Visuals
3.0
3.0
6.0
8.0
Suggestions
Can watch again
No
Good for kids
No
Good for dates
No
Wait to rent it
Yes
Based on the Korean film "The Man From Nowhere", Rocky Handsome tells the story of Kabir Ahlawat, aka Rocky Handsome (John Abraham), a morose, ghost of a man who runs a pawnshop in a seedy part of Goa. Burdened by memories of a traumatic past, he lives almost catatonically. However, he enjoys an unlikely friendship with his neighbour's 7-year-old daughter, Naomi (Diya Chalwad). Her mother (Nathalia Kaur) is a junkie, and when she gets embroiled in a conflict with the local drug mafia, Naomi is kidnapped. Rocky comes out of hibernation, and goes on a rampage in a bid to rescue the girl.

First, let's get one thing out of the way - John Abraham had absolutely no thespian ambitions for this film. He doesn't even try to fool you into thinking that he's trying to act. The message is very clear - come watch me fight (and take my shirt off). And he does very well on both counts. The action choreography is brutal and visceral. Abraham has put in a tremendous amount of work, and to see a man with his kind of heavy musculature move with the fluid grace of a dancer, all to the percussion of broken bones, is a disturbing pleasure.

Allow us to explain that. The pleasure comes from watching an action star who brings an impressive amount of realism to his action scenes, but many of those scenes will make you wince no matter how hardcore you think you are. Knives and axes are wielded with nonchalant ease, and in the climax, Rocky is like a crazy guest at the Sunday roast, who carves his way through the baddies, slices and dices them for good measure, and then decides to make mincemeat out of them just for the heck of it. That's the general aesthetic of the action choreography.

Still, there's something missing. Kill Bill had a willowy blonde wreak the same kind of mayhem, but you felt invested in her quest for revenge. That's not the case here. Sure, the protagonist is certainly given a tragic backstory and an intriguing past, but his immediate motivation for risking his life to save Naomi, and snuff out scores of others, is given short shrift. All the audience gets is about ten to fifteen minutes of cloying interaction between Rocky and Naomi. Thanks to poor dialogue-writing, the child comes across as annoying, and Rocky as, well, comatose. This is a crucial mistake because the inappropriately developed emotional track of the film doesn't let you empathise or sympathise with the hero and the little girl.

Add to that the average performances, and you have a real problem. We could train our guns on the director, but what's the point? He plays the central villain, Kevin (Nishikant Kamat), and judging by the quality of that act, he couldn't have made much headway with the others anyway. His brother, Luke, played by Teddy Maurya, is so over the top that you want to swat the guy with a mosquito racket, and will derive a sadistic pleasure from his rather graphically gruesome demise at the end. Another face in the long line of leaden faces in this film is Kazu Patrick Chang, a well-known Thai martial arts action star, but he compensates by providing some of the best one-on-one combat sequences with Abraham in the film.

Rocky Handsome certainly scores high on atmosphere and feel, thanks to the work of cinematographer Shanker Raman. Don't expect to feast your eyes on Goa's sunny beaches. Instead, you'll be treated to well-lit and moody visuals of dingy bars, dilapidated buildings, and, of course, blood-splattered floors and walls. A portion has been shot in the Seychelles as well, and serves as a palliative to all the doom and gloom, as does the beautiful Shruti Hasaan, who plays Rocky's wife. However, her brief for the role was obviously, "Pout, please."

The movie has a few catchy club numbers, and you'll probably recognize the cover of the Bombay Rockers' song "Rock The Party". Nathalia Kaur and Nora Fatehi up the oomph factor in their item songs, but the frenzied gyrations are quite cringeworthy. "Aye Khuda" by Rahat Fateh Ali Khan also deserves mention for being the most soulful part of this entire film.

At the end of the day, the biggest culprit here is the script. The storytelling isn't fluid or cohesive, and it interrupts its own plot points with elaborate action scenes. Add to that a veritable deluge of characters - drug lords, organ harvesters, child traffickers, the police, the CIA - and 40 minutes into the film, you don't care enough to keep track of any of them. Your entire experience at the end of two hours can best be summed up as a blur of relentless action sequences.

Perhaps if the makers had cleared the clutter, focused on one villain, given more reel time to the relationship between Rocky and Naomi, and put one of those many guns used in the film to Abraham's head and made him act - it might have worked. 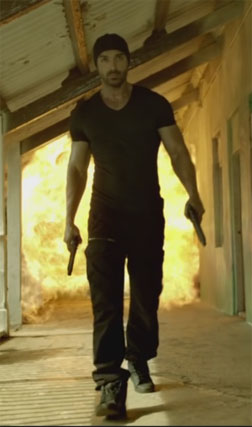 ADVERTISEMENT
This page was tagged for
Rocky Handsome hindi movie
Rocky Handsome reviews
release date
John Abraham, Nishikant Kamat
theatres list
Follow @fullhyderabad
Follow fullhyd.com on
About Hyderabad
The Hyderabad Community
Improve fullhyd.com
More
Our Other Local Guides
Our other sites
© Copyright 1999-2009 LRR Technologies (Hyderabad), Pvt Ltd. All rights reserved. fullhyd, fullhyderabad, Welcome To The Neighbourhood are trademarks of LRR Technologies (Hyderabad) Pvt Ltd. The textual, graphic, audio and audiovisual material in this site is protected by copyright law. You may not copy, distribute, or use this material except as necessary for your personal, non-commercial use. Any trademarks are the properties of their respective owners. More on Hyderabad, India. Jobs in Hyderabad.