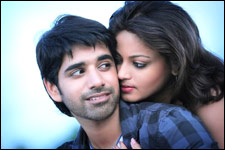 Deepa Garimella / fullhyd.com
EDITOR RATING
6.5
Performances
Script
Music/Soundtrack
Visuals
6.5
5.5
6.5
7.5
Suggestions
Can watch again
No
Good for kids
No
Good for dates
Yes
Wait to rent it
No
It's not fair to be harsh to a formula film. Especially one that isn't even saying it's not one. Current is an attempt at the basics - more on the lines of successfully getting to the end of your shopping list on time rather than browsing around for accurate measurements, embellishments and exotica. And it is an attempt pulled off reasonably well.

It's the kind of film that has its climax at the railway station - a climax that is only too symbolic of how desperate Current is for driving directions. But, like we said, it gets there, with a fair bit of fun on the way.

The plot doesn't get more elementary than this. It starts with a random sighting of the heroine, Sneha (Sneha Ullal), by the hero, Sushanth (Sushanth), all the while hammering into our heads that the match is ill-fated. You see, she was brought up to be orderly and diligent while he's someone who believes in spontaneity, the kind that involves not being too particular about when to clear exams, or more precisely, about clearing them at all.

There's a courtship that dangerously teeters on annoyance - Sushanth woos her first with verbal diarrhea, followed by nocturnal visits to her logistically convenient room in her house. They get together for a period long enough to accommodate a song, but soon enough, he goofs up majorly on his first meeting with her dad.

Sushanth then has to make amends, and as she demands, try to make her 'stop loving him'. He goes through these over-sung travails of the filmi hero right until the railway station.

Though Current is highly predictable, the absence of over-the-top-ness is a strength separating it from the general glut of movies around, and so it serves fine as a quick-fix teen venture. Sushanth, the actor, has safety in the form of these props around him - a join-the-dots romance, decent lines mouthed by the likes of Tanikella Bharani, Raghu Babu and Brahmanandam, a super-catchy title song, a fairly popular starlet - there's not a lot that can go wrong.

Except for the join-the-dots romance. It is less than cute because Sneha and Sushanth are never really intimate - the whole film is about him trying to please her, sometimes in ways that can't happen outside of films.

More probably than not, Sushanth is going to want to show he can look good while baring fangs and having blood stream from his mouth; and will sign up movies that make him bash up 250 goons one by one in a 6-minute sequence. For now, his role in Current is one that makes more sense, considering his general demeanour - he has just two fights, and one of them's a comedy sequence. A huge Nagarjuna-hangover notwithstanding, he's allright with the lover-boy bit, the comedy, and, as he shows very briefly in the end, with the tears.

Sneha Ullal seems to have woken up to the world of acting, and she's okay. Tanikella is a pleasure to watch, especially in the first quarter of the film. Brahmanandam, however, comes into the picture in the second half.

Current's best song is done with within the first 20 minutes, and the rest are in line with the campus feel of the film. Except for a mildly interesting sad number in the end, there's nothing extremely striking in the audio department. And as for the visuals, the film looks quite breezy and hep.

Current is a decent weekend outing. It's that brief appearance by Shakeela that's keeping us from using the word 'family' whole-heartedly in that sentence.
Share. Save. Connect.
Tweet
CURRENT SNAPSHOT

ADVERTISEMENT
This page was tagged for
Current telugu movie
Current reviews
release date
Sushanth, Sneha Ullal
theatres list
Follow @fullhyderabad
Follow fullhyd.com on
About Hyderabad
The Hyderabad Community
Improve fullhyd.com
More
Our Other Local Guides
Our other sites
© Copyright 1999-2009 LRR Technologies (Hyderabad), Pvt Ltd. All rights reserved. fullhyd, fullhyderabad, Welcome To The Neighbourhood are trademarks of LRR Technologies (Hyderabad) Pvt Ltd. The textual, graphic, audio and audiovisual material in this site is protected by copyright law. You may not copy, distribute, or use this material except as necessary for your personal, non-commercial use. Any trademarks are the properties of their respective owners. More on Hyderabad, India. Jobs in Hyderabad.