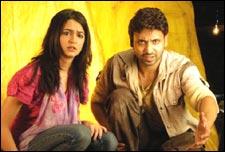 Deepa Garimella / fullhyd.com
EDITOR RATING
4.0
Performances
Script
Music/Soundtrack
Visuals
6.0
3.5
6.5
6.5
Suggestions
Can watch again
No
Good for kids
No
Good for dates
Yes
Wait for OTT
Yes
DD (Sumanth) is an orphan who's forgotten the loving care Saraswatamma (Sudha) flooded him and his friend with in their orphanage in childhood. This and the fact that he's also forgotten when he was last seen in a decent movie, make him a ruffian under the care of Giranna (Tanikella Bharani).

DD has a pitiable history with girls, too. The latest one ran away with all the green he earned and stashed in his home. This, when he's seriously considering abandoning the crooked, ugly, pointless world of movies, err, goondaism, and harbouring massive dreams of becoming something significant in the world - the owner of a pulihora centre. The highly ticked-off DD then decides to join Das (Jayaprakash Reddy), a high-profile thug who's reputed to pay really well.

Enter Pragati (Krithi), an NGO owner who's fighting for some starving ryots in a village - they're being oppressed by a landlord who's asking them for Rs. 4 crores in return for their land. Now if anyone should be helping Pragati out it's her father, but he's as likely to help out desperate farmers as Pepsi containing 81 herbs of medicinal value - her father's a minister, and the agriculture minister at that.

After Pragati figures this out, she reasons that a fool-proof way to get 4 crores of money is to fake her own kidnapping. Now, being a minister's daughter, she shouldn't have gone so far for the money - if she'd finished off her father, we'd all have paid her twice as much.

Conniving with a police officer Krishna (Harshavardhan), she's all set on a busy street, waiting for the scheduled abduction. But it's not the fake kidnappers who arrive there - it's DD and his sidekick. DD has no clue she's waiting to be napped. Pragati has no clue that they're not the ones she's waiting for. As for the writers, they have no clue about anything by now.

What follows is a drama that goes on for a little over 72 hours - the audience has to even bring along a change of clothes - and it involves greatly interesting nuances like DD having a major crush on Pragati and feeling ecstatic when his hand touches hers. Or the graphic depiction of how a bullet is removed from DD's body.

Apart from a few innovatively shot scenes here and there, and two good songs (of which one gets done with in the first 10 minutes, and the other appears with the end titles), Boni has nothing to prevent people from calling it the snore-fest of the season. As for the comedy, the film tries, but there are no really smart dialogues, save for those by Harshavardhan and Tanikella Bharani.

Once the absurdity of Pragati announcing her kidnap scheme is done with, there's nothing ingenious in the rest of the story to make it even remotely entertaining. The one-way pining of DD for the girl, which seems to be the key thread of the film, is enough to lull your alarm clock to sleep.

Sumanth has a role that doesn't demand a lot, and he's fine with his fights, his songs and his dialogues. Krithi is good, too. As for the others, they're mostly seasoned actors. And what's with Naresh in that microscopic role?

Ramana Gogula's music is more about new kinds of sound, and there's his usual rap in one of the songs. Like we mentioned, there's a soft number right at the beginning. The film looks well-shot - mostly in the southern part of the city - and a few of the songs are nice to watch. Again, Gogula's to be given credit.

Boni is strictly for people who've missed Sumanth around. And for Sumanth to miss people around him.
Share. Save. Connect.
Tweet
BONI SNAPSHOT

See Boni full details
BONI USER REVIEWS
1 - 1 OF 1 COMMENTS
POSITIVE  |  NEGATIVE |  NEWEST  |  OLDEST  |  MOST HELPFUL  |  LEAST HELPFUL
USER RATING
3.0
2 USERS
Performances
Script
Music/Soundtrack
Visuals
4.0
2.5
6.5
6.0
Can watch again - No
Good for kids - No
Good for dates - No
Wait for OTT - No
Phaneendra Kumar Pappu on 13th Jun 2009, 1:17am | Permalink
First of all, Ramana Gogula should have felt contended as a composer. He made a bad choice making this film. Sumanth is bad as always.

Except for a few comedies, there is nothing in this movie. Some shots are excellently executed, just like the reviewer mentioned. But, that did nothing to save this crap...


Pros: Music, but will be forgotten
Cons: Everything else

ADVERTISEMENT
This page was tagged for
Boni telugu movie
Boni reviews
release date
Sumanth, Krithi
theatres list
Follow @fullhyderabad
Follow fullhyd.com on
About Hyderabad
The Hyderabad Community
Improve fullhyd.com
More
Our Other Local Guides
Our other sites
© Copyright 1999-2009 LRR Technologies (Hyderabad), Pvt Ltd. All rights reserved. fullhyd, fullhyderabad, Welcome To The Neighbourhood are trademarks of LRR Technologies (Hyderabad) Pvt Ltd. The textual, graphic, audio and audiovisual material in this site is protected by copyright law. You may not copy, distribute, or use this material except as necessary for your personal, non-commercial use. Any trademarks are the properties of their respective owners. More on Hyderabad, India. Jobs in Hyderabad.