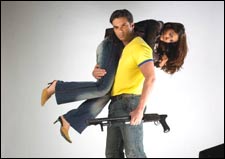 Jaiwantika Dutta-Dhupkar / fullhyd.com
EDITOR RATING
3.0
Performances
Script
Music/Soundtrack
Visuals
4.5
3.0
4.5
4.5
Suggestions
Can watch again
No
Good for kids
No
Good for dates
No
Wait for OTT
Yes
Watching Team - The Force is like doing a dangerous trapeze act: the audience is often left grasping at the thin air between two completely unconnected subplots. The film is like an amateur driver caught at the crossroads - a confused movie which zig-zags from one narrative to the next like it has a crazed criminal with a loaded gun in the backseat.

Absolutely Absurd but Absolutely True - it is not till after the interval that the director decides to choose a single storyline and tell us just what the film is about. At this point, the audience might feel somewhat sorry for that entire graveyard of elaborately-wrought and halfway-abandoned subplots, but more relieved than anything else, for they are finally an hour-and-a-half closer to the end of this movie.

A film that threatens to pop the corks for its sheer glory of inanity, Team is one of those about how all those goodhearted guys also have a natural affinity towards being B-grade - you know, the Bhai-kind. So our hero Sohail Khan (of 'I- Proud-To-Be-An-Indian' fame) and his two merry sidekicks (Yash Tonk and *) are a 'force' of musicians trying to make it big on money Baba (Kulbhushan Kharbanda) loans them from the sum he has saved up for his daughter's nuptials.

When Bad Bhai Raman (Sayaji Shinde) tries to forcibly evict Baba from his ancestral home, the sweetlime-fizz-downing Raj allows some bubbles to get to his brain and begins asking some pertinent questions like, "What if I try to extort from the extortionist?" Thus, he kidnaps the Bhai's sister Rhea (Amrita Arora). There is also a hate-track between Rhea and Raj, and there are a couple of steamy songs where Rhea seduces Raj out of pure hatred.

Team is a highly incoherent, self-indulgent film that seems to have done more haraam than good. Chunks in its script stand out as individual, stand-alone sequences with no relation to each other, except for the fact that they claim to be part of the same film. There is almost no attention to detail. If a script is the backbone of any film, then Team lacks several vertebrae. The editing is so shoddy that half the film could easily have been chopped off with no tears shed.

Team - The Force has neither a team to boast of, nor a force to contend with. Of course, nobody is really surprised that even though this film is called Team, Sohail Khan hogs all the footage and more. Sayaji Shinde does a good comic act in the frames he's given. The girls do their two pennies' worth: Arti Chabbria jives to a song and has two scenes, but that is it - she disappears pronto. Amrita Arora stays on a little longer, but has very little to do that's interesting.

Now, the positives. The music is the sort that makes Affu mian dance all the way from row A to row K and billow confetti. If your feet are already feeling happy, then we hope you consider your options. The visuals are interesting, and deviate from the usual, so you can make out some effort has gone into them. Old Bombay architecture, Konkan slums and Goan greenery make for a rather alternate viewing experience. The choreography for the dance sequences, however, snatches the audience back to the the sequin-embellished bikinis and yachts of Bollyland.

Team shortchanges - it offers you Sohail Khan, one-and-a-half hours of film plus loose change videos, and bulldust, instead of, as promised, a team performance, three hours of logic, and entertainment. More fizz than force, definitely.
Share. Save. Connect.
Tweet
TEAM - THE FORCE SNAPSHOT

ADVERTISEMENT
This page was tagged for
film team the force
Team - The Force hindi movie
Team - The Force reviews
release date
Sohail Khan, Vrajesh Hirjee
Follow @fullhyderabad
Follow fullhyd.com on
About Hyderabad
The Hyderabad Community
Improve fullhyd.com
More
Our Other Local Guides
Our other sites
© Copyright 1999-2009 LRR Technologies (Hyderabad), Pvt Ltd. All rights reserved. fullhyd, fullhyderabad, Welcome To The Neighbourhood are trademarks of LRR Technologies (Hyderabad) Pvt Ltd. The textual, graphic, audio and audiovisual material in this site is protected by copyright law. You may not copy, distribute, or use this material except as necessary for your personal, non-commercial use. Any trademarks are the properties of their respective owners. More on Hyderabad, India. Jobs in Hyderabad.