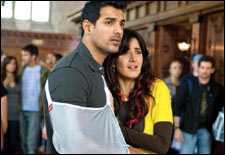 EDITOR RATING
4.0
Performances
Script
Music/Soundtrack
Visuals
6.0
4.0
6.5
9.0
Suggestions
Can watch again
No
Good for kids
No
Good for dates
No
Wait for OTT
Yes
New York is no stock Yash Raj eye-candy filled with sweet nothings, gooey lines and glycerine. It is heavy-duty fare that can inspire hatred for the US in the impressionable, editorials off movie critics, and paeans from director Kabir Khan's ilk - we mean Muslims, for whom this is the first really high-profile effort in India to lend them a voice. Unfortunately, it stays a voice when it could have been a megaphone, since New York is no movie - it's undisguised propaganda, diluting any impact it could have had thanks to its absolution of some basic tenets of moviemaking.

New York is a movie about the lives of Muslims in post-9/11 US - the profiling, the stigma and the worst case scenario. Visually opulent and heavily promoted, it certainly did not lack in budget. And Yash Raj has made plenty of successful films. Where then does this monomaniacal surge come from? A point of view in a movie, like a cherry atop a cake, is more visible when presented as part of a palatable whole rather than all by itself. New York is like a pack of cherries you have to eat all at one go. And raw cherries at that.

New York features Omar Aijaz (Neil Nitin Mukesh), Maya (Katrina Kaif) and Sameer Shaikh (John Abraham), bumchums in the NYSU, hanging out together all through 2 years of PG studies. Maya eventually falls in love with the achiever Sameer, leaving the silently pining Omar heart-broken. He vanishes from their lives, until 7 years later the FBI picks him up on false charges, and makes a startling revelation to him.

New York starts off like a typical Yash Raj movie - bubble-gummy, bright colours all around, and matters of the heart appropriating the radar screen. However, it soon changes tack - the background shifts from spring and fall in the cheery NYSU campus to the grunting of the metal hinges of cage doors in Guantanamo Bay. Make no mistake, it's gut-churning to see the torture - one of the incidents has a prisoner's face hooded and a guard urinating on the hooded face, and the hood then being left on the prisoner's face for several hours. Plus, everything else you've heard if you've been reading - waterboarding, sleep deprivation, loud music, matchbox-sized cages, the works.

It's hard to feel any sympathy for the US after seeing that kind of torture of suspects, against most of whom there was never any evidence - there's nothing like a movie to bring to life something that a news article never can. Many detainees, even after being released, can never be the same again - the mind is severely damaged, and there are several psychosomatic disorders that render them unemployable. New York does a fine job of showing this aspect of torture, the after-effects. And more movies like this might turn public opinion against the US and restore respect to Muslims living there.

The film, however, fails in several basics of movie-making. For starters, the basic battle of good versus evil is not happening, since the "good" person is doing evil, leaving no good person at all, and minimizing any involvement you may have with the film.

Then, there doesn't seem to be a happy ending possible given the way things are going, which means there's nothing to look forward to. Indeed, there is almost no time in the duration of the film when it has you feeling good - the first part has a looming heartbreak, and the second has a looming tragedy. For a movie promoted as a feel-good entertainer with plenty of eye-candy, and attracting audiences expecting that, things can't get much worse where audience dissonance is concerned.

And the slow pace of the film itself feels like there's nothing important happening anyway. Plus the climax, which shows the FBI headquarters being targeted, is confusing - you don't understand how they got there with their explosives in the first place. If this was supposed to be a thriller, that lack of clarity kills the payoff. And, of course, the ending has teenagers trooping out exclaiming what a pakao movie this is.

New York is probably a welcome effort to show another side of the story - however, bad movie-making makes it look like its only agenda was to showcase innocent Muslims being tortured by the Great Satan, which can then actually get counter-productive. If Kabir Khan had shown how barbaric the Taliban/Al-Qaeda Muslims are, too, even if briefly, it might have looked less like one-sided propaganda and lent greater credence to the actual point he perhaps wants to convey, the tragedy of innocent Muslims.

John Abraham isn't the greatest of actors, and choosing him to play a troubled person may not have been the wisest of decisions. But if your expectations of Katrina Kaif are as low as they should be if you are a moral and God-fearing person, then she might surprise. Neil Nitin Mukesh delivers, but the best is arguably Irrfan Khan as an FBI agent.

New York is a slow, depressing and rather pointless movie. If you enjoy most Yash Raj movies, this might not really be your cup of tea.
Share. Save. Connect.
Tweet
NEW YORK SNAPSHOT

RATING
6
Krishna on 1st Jul 2009, 9:24am | Permalink
Its an okay film. Considering there are better options in the city right now you can give this a pass.

RATING
5
surya teja on 29th Jun 2009, 12:07pm | Permalink
i found the movie rather confusing i mean that story is not that great but the intention of the film is positive and honest . few scenes are handled well irrfan khan and neil nitin mukesh are the stand outs ... john is ok he has all his physical assets to show off kat is usual cute eye candy us guys kabir graduates from his last venture but not a complete lacks a good script !!!!!

ADVERTISEMENT
This page was tagged for
New York hindi movie
New York reviews
release date
John Abraham, Neil Nitin Mukesh
theatres list
Follow @fullhyderabad
Follow fullhyd.com on
About Hyderabad
The Hyderabad Community
Improve fullhyd.com
More
Our Other Local Guides
Our other sites
© Copyright 1999-2009 LRR Technologies (Hyderabad), Pvt Ltd. All rights reserved. fullhyd, fullhyderabad, Welcome To The Neighbourhood are trademarks of LRR Technologies (Hyderabad) Pvt Ltd. The textual, graphic, audio and audiovisual material in this site is protected by copyright law. You may not copy, distribute, or use this material except as necessary for your personal, non-commercial use. Any trademarks are the properties of their respective owners. More on Hyderabad, India. Jobs in Hyderabad.