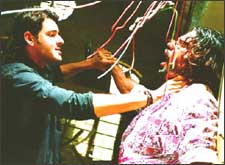 EDITOR RATING
8.0
Performances
Script
Music/Soundtrack
Visuals
NA
NA
NA
NA
Suggestions
Can watch again
NA
Good for kids
NA
Good for dates
NA
Wait to rent it
NA
Telugu movie audiences are of two types. The first category are the ones who are knowledgeable, who’ve watched plenty of Hollywood cinema, who tut-tut logical flaws, who tell you which movie was copied from where, and who most likely appreciate poetry. The second category, the remaining 99%, are the ones that really matter. Give them the right amounts of salt, spice and oil in their masala dosa, and they’ll make your movie a hit. Just don’t serve them raw mix and call it your interpretation of a dosa.

That should explain the rating. Pokiri is no award-winner. It just works. And how.

It’s impossible to see Pokiri doing any lesser than 100-150 days. Puri Jagannath has made a perfect mass action entertainer, one that makes the blood surge fast in your veins when it’s not surging faster. Its raw dialogues and unrepentant pandering to your ill-fated fantasy to be a superhero, or at least to lustily cheer one as he fights for the meek, and its impressive checklist of all ingredients for a mass pot-boiler, make this one a prominent applicant for the biggest hit of the year.

Pandu (Mahesh Babu) is a vagabond and ruffian with his heart in the right place – i. e. in money. He’ll do anything for mammon, including murder. Leading a life of crime, he runs into Shruti (Ileana), a girl who brings out the softer side in him. But involved as he is in a fight between two gangs, he cannot commit to her in peace.

That is basically what the movie is about – a superhero strategizing and executing gangwars, and rubbing out members. There’s an evil inspector Kiran (Ashish Vidyarthi) who wants to molest Shruti, and Ali (Prakash Raj), the gangster kingpin, in other significant characters.

What make Pokiri a leg-grabber for you are the dialogues - the conceptualization of several scenes with great exchanges between characters. Indeed, it shows what just well-written dialogues can do for a film. The encounter between Mahesh and Ashish Vidyarthi in a basketball court, and Sayaji Shinde’s diatribe against the media, are just two examples of the adrenaline-pumping fury of this one. There’s thought in almost every key exchange in the film, and it’s the masala dosa thought.

The music, of course, rocks. The slick editing and the visual chutzpah add all the more to the presentation that showcases what is essentially a hardcore mass movie, extremely classily. But all of this, of course, could not have succeeded without the performamces.

Mahesh has the meatiest of dialogues, and with about 15 years in the industry now, he’s nearly par for the course. He has to mostly mouth pithy lines and look indifferent, and he delivers. Ileana shows promise – she’s cast in the Genelia mould, and should last her 2 years in the industry, as a good opposite for the younger heroes. The other good performances come from, of course, Prakash Raj, and the now seasoned Sayaji Shinde (who does an impressive job dubbing for himself) and Ashish Vidyarthi.

The main theme is so hypnotic, anything seems like a distraction, including even the songs. So the comic track, involving Brahmanandam, Ali and Venu Madhav, becomes almost an irritant everytime it obtrudes into the privacy between you and the movie. And even as a stand-alone module, it’s overdone.

So Pokiri is going to be a hit. A big hit.

Big enough, perhaps, to cause worry for Mahesh Babu. On several planes. It’s going to be very difficult to deliver on the hype that his next release will generate. Refer Johnny, Andhrawala, Chennakesava Reddy and, recently, Pournami. Attempting another action film immediately might be an ill-advised career move, since it has to better Pokiri now just not to be deemed routine, which will be hard. Actually, attempting any movie for a while may be a bad idea.

Now try to forget this review and watch the movie with no expectations.
Share. Save. Connect.
Tweet
POKIRI SNAPSHOT

See Pokiri full details
POKIRI USER REVIEWS
1 - 15 OF 80 COMMENTS  |  NEXT  |  LAST
POSITIVE  |  NEGATIVE |  NEWEST  |  OLDEST  |  MOST HELPFUL  |  LEAST HELPFUL
USER RATING
7.6
831 USERS
Performances
Script
Music/Soundtrack
Visuals
10.0
10.0
9.0
9.7
Can watch again - Yes
Good for kids - No
Good for dates - Yes
Wait to rent it - No
Achilles on 28th Nov 2019, 5:48pm | Permalink
Apart from a few scenes, where there are extreme violence and obscene things, its a complete family entertainer. The most entertaining part of the movie is in the climax, when its gets revealed about the undercover cop.

However in my opinion, the song /ippatiki enka naa vayasu/ falls under obscene category and did not like it.

Amar on 22nd Aug 2012, 6:05pm | Permalink
NO LOGICS,NO ISSUES ,WE R WATCHING A MOVIE MEANT FOR ENTERTAINMENT BUT NOT FOR MORALS , NOT FOR JUDGING IT ASS HOLES.

I LOVED THIS MOVIE FULL ENTERTAINING

ADVERTISEMENT
This page was tagged for
pokiri movie greatandhra review
pokiri movie review
pokiri movie review greatandhra
pokiri movie rating
Pokiri moviestory
Follow @fullhyderabad
Follow fullhyd.com on
About Hyderabad
The Hyderabad Community
Improve fullhyd.com
More
Our Other Local Guides
Our other sites
© Copyright 1999-2009 LRR Technologies (Hyderabad), Pvt Ltd. All rights reserved. fullhyd, fullhyderabad, Welcome To The Neighbourhood are trademarks of LRR Technologies (Hyderabad) Pvt Ltd. The textual, graphic, audio and audiovisual material in this site is protected by copyright law. You may not copy, distribute, or use this material except as necessary for your personal, non-commercial use. Any trademarks are the properties of their respective owners. More on Hyderabad, India. Jobs in Hyderabad.