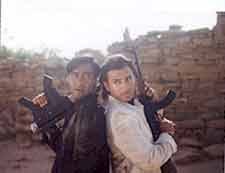 Arpan Panicker / fullhyd.com
EDITOR RATING
5.0
Performances
Script
Music/Soundtrack
Visuals
NA
NA
NA
NA
Suggestions
Can watch again
NA
Good for kids
NA
Good for dates
NA
Wait to rent it
NA
Amidst a flood of family oriented movies, which looked more or less like marriage videos, came Kachche Dhaage, an out-and-out masala movie. But it wasn't the relief that it should have been. It was a hotchpotch effort to woo the audiences with typecast roles and a hackneyed story line, and failed miserably. Ajay Devgan as an angry young man and Saif Ali Khan as a spoilt rich brat find tailor-made roles, but a movie is more than just that. It is in the other departments that Kachche Dhaage fails.

The story line is as old as the hills. Two stepbrothers, one Muslim and the other Hindu, are united over their father's deathbed. But they hate each other's guts. And they part, sorry that they ever had to meet. But circumstances force them together when they become the target of a terrorist conspiracy. They are on the run, with the cops, and the CBI to boot, after them. Ajay Devgan plays Afthaab, a border thief, and Saif plays an advertising executive, Dhananjay. These two run and run from the law almost throughout the length of the movie. Sadashiv Amrapurkar plays a CBI officer who tries hard to convince Govind Namdeo, a Rajasthan police officer, not to shoot the two fugitives, but to catch them alive. Manisha Koirala and Namrata Shirodkar play the sweethearts of the two heroes. But they are there in the movie just as mannequins for prancing about in the mandatory songs.

That is the basic story line, with many unnecessary twists and turns to drag the movie to the requisite three hours. There is an effort at creating some suspense over a traitor in the military camp who is leaking information to the terrorists, but it fails miserably for reasons that I'd better not reveal. Action and stunts strive to be spectacular, but fall short of the mark. There is some humor included in the form of conversations between Afthaab and Dhananjay, but that is hardly sufficient to retain audience interest throughout the length of the movie. This is one movie that hardly survived for a week after its release. One wonders which optimistic soul thought of its re-release.
Share. Save. Connect.
Tweet
KACHCHE DHAAGE SNAPSHOT

ADVERTISEMENT
This page was tagged for
kachche dhaage full movie
film kachche dhaage full movie
kachche.dhaage.hindi.moves.in
Kachche Dhaage hindi movie
Kachche Dhaage reviews
Follow @fullhyderabad
Follow fullhyd.com on
About Hyderabad
The Hyderabad Community
Improve fullhyd.com
More
Our Other Local Guides
Our other sites
© Copyright 1999-2009 LRR Technologies (Hyderabad), Pvt Ltd. All rights reserved. fullhyd, fullhyderabad, Welcome To The Neighbourhood are trademarks of LRR Technologies (Hyderabad) Pvt Ltd. The textual, graphic, audio and audiovisual material in this site is protected by copyright law. You may not copy, distribute, or use this material except as necessary for your personal, non-commercial use. Any trademarks are the properties of their respective owners. More on Hyderabad, India. Jobs in Hyderabad.