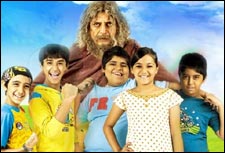 Deepa Garimella / fullhyd.com
EDITOR RATING
2.0
Performances
Script
Music/Soundtrack
Visuals
4.0
2.0
5.0
5.0
Suggestions
Can watch again
No
Good for kids
Yes
Good for dates
No
Wait for OTT
Yes
It's hard to see how any self-respecting Dhoom-loving kid would allow himself to be caught dead watching our filmmakers' suppositions of entertainment for the 3-footers, including Zor Lagake..., a film that spells 'sleep' from the word go.

A bunch of kids is scared of this old dark and dirty beggar (Mithun Chakraborty) across the street, and think he's out to kill them with his weapons. To keep an eye on him, they decide to build a tree house, and for this, they seek the help of Ram, a kid who works at a nearby construction site.

The tree-house is done, the kids pry on the beggar who they call Ravan, and there's a bit of friction between them, too. When the builder of the site (Gulshan Grover) plans to get the tree cut, the issue becomes slightly bigger than that of the kids just losing their offenseless hideout - they've become fond of the whole tree now.

Zor Lagake... mixes social concern with a no-brainer story. You can't even bash up the movie for not being entertaining enough, because it hasn't even tried. The film is starved of solid writing, and an extended toilet joke in the second half is testimony to just that.

The thawing of the air between the kids and the beggar could have made for some touching drama, but the film goes ahead and inserts angles like the obligations of the construction kid (with a hammy Seema Biswas as his mother), and an over-dramatized anti-climax involving the villain and, again, the construction kid.

There are only three characters that seemed to have been designed for a comic book kid-flick - Mithun plays the first, an interesting foe to the bachcha party, and Gulshan Grover and Mahesh Manjrekar play the other two - a greedy baddie and his twitchy, grouchy flunky, respectively. Amitabh Bachchan's voice makes a guest appearance, but it sounds like a flattened version of him, so there's nothing to look forward to there.

Mahesh Manjrekar is the best of the lot, and even has a few genuine jokes. The kids act well, too, and it's not their fault the film lacks energy and soul. On the technical front, Zor Lagakeâ€¦ isn't yucky, but it isn't admirable either. The same is with the songs, which are choreographed well.

Zor Lagake... will be forgotten sooner than you can complete saying that title. For better entertainment, let your kids take social studies tuition. And to save the environment, cut down on textbooks.
Share. Save. Connect.
Tweet
ZOR LAGAA KE HAIYA SNAPSHOT

ADVERTISEMENT
This page was tagged for
Zor Lagaa Ke Haiya hindi movie
Zor Lagaa Ke Haiya reviews
release date
Mithun Chakraborty, Mahesh Manjrekar
theatres list
Follow @fullhyderabad
Follow fullhyd.com on
About Hyderabad
The Hyderabad Community
Improve fullhyd.com
More
Our Other Local Guides
Our other sites
© Copyright 1999-2009 LRR Technologies (Hyderabad), Pvt Ltd. All rights reserved. fullhyd, fullhyderabad, Welcome To The Neighbourhood are trademarks of LRR Technologies (Hyderabad) Pvt Ltd. The textual, graphic, audio and audiovisual material in this site is protected by copyright law. You may not copy, distribute, or use this material except as necessary for your personal, non-commercial use. Any trademarks are the properties of their respective owners. More on Hyderabad, India. Jobs in Hyderabad.