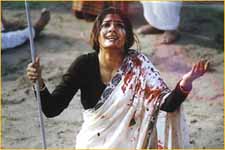 Produced by the Ministry For Health And Family Welfare, directed by Kalpana Lajmi and featuring a national award-winning performance by Raveena Tandon, Daman was a much-awaited movie in some circles, and a curiosity in many. But a mediocre social drama with careless direction and zero entertainment value is what you get. So here's another moral of this story: when you walk into a theater, leave your expectations behind.

Durga (Raveena Tandon), a poor village girl, is married off to Sanjoy (Shivaji Shinde), the son of a reasonably wealthy family. Sanjoy, a cruel, crude and promiscuous man, mistreats her, constantly degrades her and rapes her. Angry, afraid and hurt, Durga turns to her brother-in-law Sunil (Sanjay Suri) for support and sympathy. Love blossoms in the unlikeliest of relationships, but both are held back by social constraints.

Years go by without Durga's wrath, but things threaten his world when Sanjoy threatens to marry their 12-year old daughter Deepa to a middle-aged alcoholic. Then one night in a drunken stupor he kills Sunil, and Durga decides that's it. She runs. And lands up in Guwahati, in the shelter of a kind woman with no children of her own. But Sanjoy finds them, and pays for it.

None of the characters is credible, least of all Sanjoy, who seems mentally ill at times, downright cruel at others. We get no background, no orientation on any of people involved, and no explanations are given about why things are the way they are. Sanjoy's dysfunctional family has no real characterization and is just an excuse for a background. Durga seems to have popped up out of nowhere.

And if that were not enough, there's a police inspector mouthing women's lib dialogues, as if, somewhere along the line, Lajmi suddenly felt guilty about not having enough messages for women.

Raveena Tandon lives her role, and does so with dignity. But an Oscar-winning performance it is not. Both Shaan and Raima Sen make utter fools of themselves, and you are left wondering if the director was on vacation during their stint. The music too is a disappointment. The haunting song Gum Sum Gum Sum by Bhupen Hazarika is a beautiful number, and Hey Ram Ram is okay, but none of the other songs deserves mention. Don't expect anything in the class of Rudaali.

Whatever happened to entertainment, and whoever said social dramas need not be entertaining? To make things worse, Lajmi gives us a juvenile song between Shaan and Raima. Puleeze! There are no nice or warm moments in the movie, nothing that's even mildly pleasing.

It's a shame that Daman turned out the way it did. What could have been an important and interesting movie puts up a disappointing show. Consumed by symbols and symbolism, Lajmi fails to move you into empathy or understanding, and leaves you bored and irritated. It's a shame.
Share. Save. Connect.
Tweet
DAMAN SNAPSHOT

ADVERTISEMENT
This page was tagged for
Ravena,ka,daman,movie
daman movie ravina tandon
Daman hindi movie
Daman reviews
release date
Follow @fullhyderabad
Follow fullhyd.com on
About Hyderabad
The Hyderabad Community
Improve fullhyd.com
More
Our Other Local Guides
Our other sites
© Copyright 1999-2009 LRR Technologies (Hyderabad), Pvt Ltd. All rights reserved. fullhyd, fullhyderabad, Welcome To The Neighbourhood are trademarks of LRR Technologies (Hyderabad) Pvt Ltd. The textual, graphic, audio and audiovisual material in this site is protected by copyright law. You may not copy, distribute, or use this material except as necessary for your personal, non-commercial use. Any trademarks are the properties of their respective owners. More on Hyderabad, India. Jobs in Hyderabad.