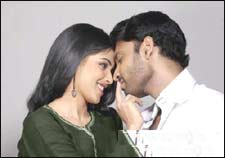 It's interesting to observe how a simple question can confuse a true cinema lover - e. g. what is the last movie in which Sumanth acted? (This might come as a shock, but it is not Sholay.) How many movies has Sumanth acted in? (Again, would you believe it, it's not Sholay.) So, to increase general awareness of the reel world, Sumanth has finally come out with a movie, after a gap no one bothered to remember.

Satyam is an honest attempt in merging two Nag movies with a baseline of a dozen other movies. But to the credit of the makers, it isn't half as bad as it sounds. Satyam somehow manages to keep afloat of all the slime. 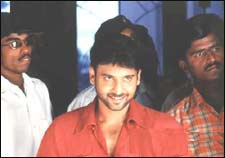 Sumanth is Satyam, a bloke who never really bothered to examine the mathematical authenticity of p or the intricacies of Shakespearean literature. He's more into helping-his-friends stuff. Consequently, he's not really liked by his dad. So much so, he gleefully kicks him out of the shack. This happened the last time in a Telugu movie exactly 45 seconds ago. But one remembers Nag's Vajram for some reason.

Living on his own, Satyam's young blood-pumper wants a curvaceous female blood-pumper to sing songs with. Although cardiologists are against this phenomenon, cinema gives a damn about them. So steps in Genelia (that non-boy from Boys) as the love of Satyam's life. She's a huge fan of a brilliant lyricist, who, as you have guessed, is our Satyam. He's ghostwriting heavenly songs for an established lyricist.

While he's doing tunes, his pals manage to screw-up things between him and Genelia, and she concludes that Satyam's a total nimrod. Whatever he does, it turns out sour for her. This happened the last time in a Telugu cinema exactly a minute ago. But one remembers Nag's Nuvvu Vastavani for some reason.

A gem whose radiance is admired by all, except the two buyers who're wearing some swell sunshades - that's Satyam. Sounds like a new Rayban ad in the making. Satyam's dad and his love constantly misunderstand his godly actions. But as the movie draws to its time limit, dad and love take off the dark glasses and happily sunbathe in his radiance. 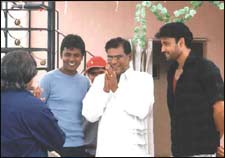 Kota Srinivas Rao is the negotiator who concludes all business without any casualties. He plays Genelia's dad, the guy instrumental in their union. There's another new chap who plays the rowdy college-goer part. This gentleman is quite decent looking, and can make it big in the industry if he stops behaving like he's got piles the size of Jupiter.

ADVERTISEMENT
This page was tagged for
Satyam telugu movie
Satyam reviews
release date
Sumanth, Genelia
theatres list
Follow @fullhyderabad
Follow fullhyd.com on
About Hyderabad
The Hyderabad Community
Improve fullhyd.com
More
Our Other Local Guides
Our other sites
© Copyright 1999-2009 LRR Technologies (Hyderabad), Pvt Ltd. All rights reserved. fullhyd, fullhyderabad, Welcome To The Neighbourhood are trademarks of LRR Technologies (Hyderabad) Pvt Ltd. The textual, graphic, audio and audiovisual material in this site is protected by copyright law. You may not copy, distribute, or use this material except as necessary for your personal, non-commercial use. Any trademarks are the properties of their respective owners. More on Hyderabad, India. Jobs in Hyderabad.