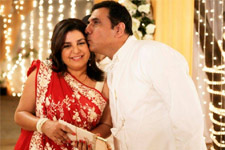 Nupur Barua / fullhyd.com
EDITOR RATING
6.0
Performances
Script
Music/Soundtrack
Visuals
7.0
5.0
6.0
7.0
Suggestions
Can watch again
Yes
Good for kids
No
Good for dates
Yes
Wait to rent it
No
A "mature" love story is not something that has worked very well in Indian cinema, for various reasons - the most obvious being that when the audience wants to spend two hours watching two people romance and sing-and-dance, it prefers young, gorgeous, perfect people. This outlook may just change, however, with the release of Bela Sehgal's Shirin Farhad Ki Toh Nikal Padi.

The director took a love story (and named her characters Shirin and Farhad to add authenticity), incorporated all the formulae that Valentine's Days and proposals are made of (read: cheesiness), added a few songs, and then flipped it all to present a believable spoofy-humoured fun film. And it works. Well, mostly.

Farhad Pastakiya (Boman Irani) is a 45-year-old man, whom love has eluded thus far. His bachelorhood becomes the topic of discussion at most gatherings, but he lives in a state of complacent daze with his domineering mother (Daisy Irani) and lively grandmother (Shammi). Farhad's profile on matrimonial sites includes his profession - a bra-panty salesman - which may be the reason for his inability to find a bride.

Enter 40-year-old Shirin Fugawala (Farah Khan), the straight-talking, aggressive secretary of a community trust. Farhad is swept off his feet, but his lack of experience in the wooing department leads to a few mishaps and misunderstandings, until Shirin realises that not only does he make her want to be a better person; he is also a rare gem.

And then, as is the requirement with most love stories, comes that one obstacle that can either break the couple apart, or make them stronger. This hurdle is personified by Farhad's mother, who has an old score to settle with Shirin, and takes righteous pleasure in being the cause of the secretary's misery. What follows is chaos and pandemonium, even as the 40-something couple try to hang on to their commitment to each other.

Bela Sehgal may have played it safe by choosing the Parsi community of Mumbai - known for their humour and quirks - to set her romance in, but she goes a little overboard with the stereotyping. Every Parsi cliché that you have ever seen in Indian cinema is revisited. The story, by itself, is interesting and realistic, but the exaggerated portrayals of characters (complete with the accent) may become a little exasperating after a point.

Shirin Farhad Ki Toh Nikal Padi is not a long movie, but the above-mentioned gags stretch it a bit. On the other hand, the bawdy jokes may just find an appreciative audience with a sense of humour that can absorb it all. The love story, despite all the excitement, could have done with a little less melodrama - it jars in parts.

This is the first time in his career that Boman Irani plays a romantic solo hero, and he pulls it off well. He knows his character, and the setting, and therefore gives us the most realistic portrayal, ever, of his life. His command over the dialect is terrific, and given his smooth linguistic skills in other movies, a pleasant surprise. Scenes without him lack the charisma that he incorporates so nonchalantly into his character.

Farah Khan's debut comes about 15 years too late. Known for her choreography and now direction, she could have grown as an actor if she had begun a little earlier in life. She has a great screen presence as long as she has no dialogues. The minute she opens her mouth, her discomfort is apparent, and she tries too hard to be funny, almost as if she were nervous in front of the camera. She may become a better actor with experience, and lose the tendency to ham.

Shammi and Daisy Irani are both delightful and OTT in their roles. Kavin Dave is passable, and not very convincing. Other character actors add to the mayhem and entertainment.

The music in the movie is better than most recent releases. Most of the songs are situational, but Ramba Mein Samba (Usha Uthup) is particularly catchy. Ishq Mein Tere Bina is a sweet love song. In fact, most of the music is in the "happy" zone, and already popular.

Production design and costumes are decent. Again, the Parsi influence is exaggerated to a great degree, but the Parsi traditional attire is a sight for sore eyes (eyes that have been exposed to too much bling).

Shirin Farhad Ki Toh Nikal Padi is a good reason to go to the theatres this weekend, if only for the unconventional pairing and plot. The lewd jokes prevent it from being a clean family film, but it is still worth a watch. And remember, love has no expiry date (the moral/message of the movie).
Share. Save. Connect.
Tweet
SHIRIN FARHAD KI TOH... SNAPSHOT
SHIRIN FARHAD KI TOH NIKAL PADI SNAPSHOT 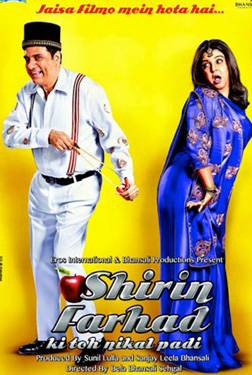