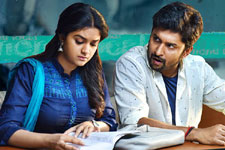 Ajay Kumar R / fullhyd.com
EDITOR RATING
4.5
Performances
Script
Music/Soundtrack
Visuals
6.0
3.0
6.0
7.0
Suggestions
Can watch again
No
Good for kids
No
Good for dates
No
Wait for OTT
No
Watching a spate of insensitive films - including the recent Luckunnodu - has its own advantage. We now have a working template for us to critique (or unabashedly ridicule) Telugu movies of the genre (the "creep" genre, as we call it) - narrate the story briefly, point out the moral crisis, ridicule the director, bash the characters, and hate ourselves for watching it.

So Babu (Nani) is an unemployed engineering graduate and a local brat. He falls in love with Kirthi (Keerthy Suresh), an aspiring MBA student, after a formulaic Tollywood encounter.

He stalks and harasses her and finally makes her love him. But Kirthi's father (Sachin Khedekar), although loving and caring, is understandably wary about Babu due to the latter's disrespectful, erratic and anti-social demeanour. Also, Kirthi's ex-lover Siddharth Varma (Naveen Chandra), a hulking cop, is back after four years, and her father arranges for her to get wedded to him. How Babu wins the father's approval forms the crux of the film. If somewhere in all that you were reminded of Cinema Choopistha Mama, please join the queue.

Being a rehash of the same director's previous film isn't the biggest of Nenu Local's sins, though. That once again a Telugu film shows its ignorance of burning societal issues, is. The movie features a protagonist who falls in love with the girl at first sight and decides to mentally molest her till she concedes. He joins the same college, sits next to her, and keeps diverting her attention. He even abuses the professor for asking him to shut up (and surprisingly, his clueless classmates don't do a thing). He has no respect for his parents, either.

Indeed, Babu is everything a woman wouldn't desire to see in a partner. In fact, Kirthi's first lover is way more honourable and dignified than Babu - but somehow, he is the antagonist. Go figure. Also, the honest police officer, who is looking for a reason to arrest Babu to prevent him from stealing his lover, doesn't stumble upon the fact that harassment is a good enough reason. Seriously, someone, please call the She-Teams already.

Kirthi is the stereotypical girlfriend who believes that money and status are required to love or marry someone. And as prescribed by the cliché, Babu changes her. If you thought we ought to have put the word changes there in double quotes, well, you've more than got the point.

Nani has chosen a bad script and role this time. His character Babu can annoy most audiences sensitive to sexual harrassment, and this choice of role to turn a mass hero was ill-advised, even if his acting cannot be faulted and even if the comedy and youth audiences might still save this film. Keerthy Suresh doesn't express the sort of emotions a person feels when they are being tortured by a serial molester masquerading as a "lover", but that's really not her fault, and her emoting and her eventual chemistry with Nani deserve mention. Sachin Khedekar pulls off a helpless and conservative father quite well. He is possibly the only actor you can like in this film. Naveen Chandra is brawny and acts well. Most other actors, although popular, aren't prominent to the course of the film. 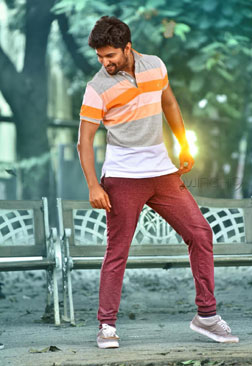 -Hari.
Ajay on 4th Feb 2017, 9:40am | Permalink
Thank you, Hari. Bollywood movies are slowly coming out of this pandemic. Tollywood, unfortunately, is still plagued by it.
The Common Movie Goer on 4th Feb 2017, 3:57am | Permalink
Stalking movies are really boring, never understand what the heroine sees in the hero save for the fact that he is handsome. My once favorite director, Puri Jagannadh, is partially responsible for all the misogyny and the harassment. In some of his earlier movies, I didn't mind it too much, at least the heroine would be agitated and would legit feel harassed by the hero (Desamuduru), or she wouldn't mind it (Pokiri - My fav all time movie). I think Ram Charan, Jr. NTR, and Mahesh (with exceptions) are the only ones who prefer not to stalk. Of course, Ram Charan does blackmail Kajal in Govindudu Andarivadele, but I'll give him a pass on that.

I am the kind of guy who loves unrealistic situations in movies, I go the movies because of them. Like goons flying in the air or the hero taking on 50 odd guys and walking away without a scratch. But I will never understand why a woman would not call the police when she is being harassed by some jobless guy with almost no redeeming qualities. I wish we would have stronger women in our movies. Look at Tom Cruise, he has women playing all these strong characters written for Emily Blunt, Rosamund Pike, and Rebecca Ferguson, and he still manages to look badass. Our heroines are always the damsel in distress, and our movies almost always fail the Bechdel test.

Totally empathise with Ajay on this one. I don't get half of Nani's movies. Bhale bhale magadivoy was hands down, one of the worst movies I've seen in recent times. His movies are hit or miss for me, erring on the miss side. I guess I'll stick to 150 and GPSK when I get the time.
Swaroop Thotada on 4th Feb 2017, 2:17pm | Permalink
I feel the same way about BBM. I would never understand how it went on to become such a blockbuster. Terrible terrible film.
JayZ on 3rd Feb 2017, 8:13pm | Permalink
Ajay Kumar.....slam dunk!!!
Ajay on 3rd Feb 2017, 10:17pm | Permalink
I remember your comment about Nani's next, on one of my reviews.
JayZ on 3rd Feb 2017, 11:35pm | Permalink
So is it safe to say this is Nani's worst movie?
Ajay on 4th Feb 2017, 12:04am | Permalink
I haven't seen many of his movies. But given the accolades he has won before, I am guessing your suspicion is true.
Josh on 3rd Feb 2017, 5:34pm | Permalink
I feel for you.
Ajay on 3rd Feb 2017, 5:42pm | Permalink
Hi, Josh. :) The unabridged version of my write-up is more depressing and rude. You have been saved.
LEAVE A COMMENT
fullhyd.com has 700,000+ monthly visits. Tell Hyderabad what you feel about Nenu Local!
MORE MOVIES
Latest Reviews
Sita Ramam
DC League Of Super-Pets
Bimbisara
Bullet Train
Ramarao On Duty
more
The Legend
Shamshera
Thank You (Telugu)
Gargi
My Dear Bootham
Shabaash Mithu
HIT: The First Case
The Warriorr
Happy Birthday (Telugu)
Kaduva
Contemporary Reviews
Resident Evil: The Final Cha...
Kung Fu Yoga
Balam
Singam 3
Om Namo Venkatesaya
more
Jolly LLB 2
Ghazi
Luckunnodu
Kaabil
Raees
The Bye Bye Man
The Founder
Shatamanam Bhavati
OK Jaanu
Random Reviews
Political Rowdy
Police Story 2
Anita And Me
Kuch Naa Kaho
Main Hoon Na
more
Ghost Rider (Hindi)
Woh Lamhe
Takkari
Transformers - Revenge Of Th...
Lafangey Parindey
Friends With Benefits
Dredd (3D)
John Day
Kaala
Mathu Vadalara
SEARCH MOVIES
Dissatisfied with the results? Report a problem or error, or add a listing.
ADVERTISEMENT
SHOUTBOX!
{{todo.name}}
{{todo.date}}
[
ip{{todo.ip}}
]
{{ todo.summary }}... expand »
{{ todo.text }} « collapse
First  |  Prev  |   1   2  3  {{current_page-1}}  {{current_page}}  {{current_page+1}}  {{last_page-2}}  {{last_page-1}}  {{last_page}}   |  Next  |  Last
{{todos[0].name}}

ADVERTISEMENT
This page was tagged for
Nenu Local telugu movie
Nenu Local reviews
release date
Nani, Keerthy Suresh
theatres list
Follow @fullhyderabad
Follow fullhyd.com on
About Hyderabad
The Hyderabad Community
Improve fullhyd.com
More
Our Other Local Guides
Our other sites
© Copyright 1999-2009 LRR Technologies (Hyderabad), Pvt Ltd. All rights reserved. fullhyd, fullhyderabad, Welcome To The Neighbourhood are trademarks of LRR Technologies (Hyderabad) Pvt Ltd. The textual, graphic, audio and audiovisual material in this site is protected by copyright law. You may not copy, distribute, or use this material except as necessary for your personal, non-commercial use. Any trademarks are the properties of their respective owners. More on Hyderabad, India. Jobs in Hyderabad.