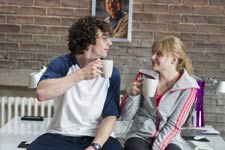 Swayamsrestha Kar / fullhyd.com
EDITOR RATING
5.0
Performances
Script
Music/Soundtrack
Visuals
6.0
4.0
5.0
6.0
Suggestions
Can watch again
No
Good for kids
No
Good for dates
No
Wait to rent it
Yes
In the beginning, there were superhero movies. Then, there were movies that parodied superhero movies. Then, there came a movie that was neither a parody, nor a true-blue genre-generated film about a caped/cape-less crusader of justice and truth. It was called Kick-Ass. And in a way, it did kick ass. Archetypes were meta-critiqued and subverted. Mindless violence was shown with a - we kid you not - humorous nonchalance.

The screenplay was generously peppered with comic book references, and in parts, the story was even taken forward through comic panels. The swashbuckling saviour of the day was a 10-year-old girl (a cute-as-a-button Chloe Grace Moretz as Hit Girl), and the eponymous narrator was a clumsy pubescent nerd.

The comics lovers rejoiced (this reviewer was one of them), and other audience members struggled to find appropriate responses to a young girl being almost-pummelled to death by a mafia boss. Kick Ass was edgy, engaging, novel and, most definitely, unapologetic.

There's a reason why we are talking about the strengths of the first movie. Because Kick-Ass 2 has none of them. It is unapologetic about mindless violence and toilet (literally) humour, and about delving into the standard superhero-credo (the question "Who/what is a superhero?" crops up every now and then). But the earnestness is missing, the edge has been blunted down to mush, and Chloe Grace Moretz has grown up.

It has been 4 years since 15-year-old Dave Lizewski (Aaron Johnson), a comic-book-loving, socially awkward boy donned the Kick-Ass costume in order to know what it felt like to be a masked vigilante.

Now, inspired by Kick-Ass (who had a public Twitter profile), others are wearing masks and becoming vigilantes. Kick-Ass wants to form a team of superheroes a la The Watchmen, and so he begins training for physical combat, and to acquire other superhero-like attributes, with Hit Girl.

Mindy Mcready a.k.a. Hit Girl (Chloe Grace Moretz), the blade-wielding, martial-arts-expert daughter of an ex-cop, is now a freshman at Dave's school. After her father, Damon Mcready (who was himself a vigilante called "Big Daddy"), was killed by the mafia, his colleague and friend Marcus Williams (Morris Chestnut) becomes Mindy's guardian.

On the other hand, Frank D'Amico - the mafia boss who was bazooka-ed by Kick-Ass in the end of the first movie - has left behind a teenage son, Chris (Christopher Mintz-Plasse) who is obsessed with avenging his father's murder, with becoming a bad-ass super-villain, and with creating a team of super-villains endowed with similar bad-ass-ness.

Soon, Kick-Ass meets other people who have created masked alter-egos for themselves and strive to be credible super-heroes. The leader of the pack is Colonel Stars and Stripes (Jim Carrey, looking old and tired, and questionably beefed up) - a grittier version of Captain America - with a German Shepherd dog (who loves to chow on phallic objects) as his side-kick.

These (dare we say "wannabe"?) superheroes form a team called Justice Forever (yes, yes, we got the Justice League of America reference), and start out with doing some good ol' community service, and then move on to servicing some Chinese gangsters. As Hit Girl would say - "(Piece of) Cake".

Meanwhile, Chris is also hiring brawn and balls for his team of super-villains. There's Mother Russia, a hulk of a Russian woman whose penchant for destruction is matched only by that of her master. There's Genghiz Carnage, an Asian man renowned for his fighting prowess.

And Chris dresses himself up in shiny leather and calls his alter-ego The Motherf***er. Obviously, things like racism / sexism / innovative nomenclature don't interest him.

The director, Jeff Wadlow, has none of the novelty of vision or directorial finesse that the director of the earlier film, Matthew Vaughn (of "Lock, Stock And Two Smoking Barrels", and "Snatch" fame), had. The characters are dealt with haphazardly, and even someone as riveting as Hit Girl is somewhat subdued.

The action sequences start out being fun, but get repetitive (massively so) towards the end. The soundtrack, though, is peppy and fun.

The screenplay sucks. While we are prepared for swearing and cussing, they don't really qualify as humour.

Aaron Johnson is forgivable as Dave/Kick-Ass. Jim Carrey is barely there. Chloe Grace Moretz, au contraire, reprises her act as Hit Girl with characteristic aplomb. If we had a problem (and we do), it would be with her emoting in scenes which don't require her to be stabbing, punching or kicking. She seems somewhat... lost in certain key scenes, unlike her earlier turn in Kick-Ass, where she had stolen the thunder in every frame she appeared in. Frankly, we missed the spunky kid who had raised hell in the earlier movie.

Though Kick Ass 2 raises pertinent questions about our obsession with heroes, it does little to answer them. It pales in comparison to its predecessor, and does nothing to enrich the basic premise of the whole concept of scrutinising superheroes.

The movie doesn't ask "Qui custodiet ipsos custodes" ("Who watches the watchmen"?) about superheroes, as much as it asks the "Whys" and the "Whats" about them. However, it doesn't provide satisfactory answers. It also doesn't provoke us to find the answers. Kick-Ass 2 is a shoddy rehash of a film that dared to be different. That is your answer.
Share. Save. Connect.
Tweet
KICK-ASS 2 SNAPSHOT 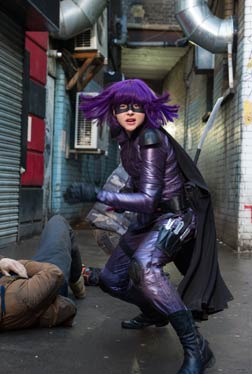 ADVERTISEMENT
This page was tagged for
Kick-Ass 2 english movie
Kick-Ass 2 reviews
release date
Aaron Taylor-Johnson, Chloe Grace Moretz
theatres list
Follow @fullhyderabad
Follow fullhyd.com on
About Hyderabad
The Hyderabad Community
Improve fullhyd.com
More
Our Other Local Guides
Our other sites
© Copyright 1999-2009 LRR Technologies (Hyderabad), Pvt Ltd. All rights reserved. fullhyd, fullhyderabad, Welcome To The Neighbourhood are trademarks of LRR Technologies (Hyderabad) Pvt Ltd. The textual, graphic, audio and audiovisual material in this site is protected by copyright law. You may not copy, distribute, or use this material except as necessary for your personal, non-commercial use. Any trademarks are the properties of their respective owners. More on Hyderabad, India. Jobs in Hyderabad.