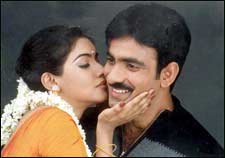 What do you get when you combine a current rage leading actor, a fresh heroine and a highly seasoned supporting cast with a red hot director, a generous producer, a funky music director and an entirely offbeat title? Not all that much, as you're about to find out.

Amma, Naanna... is all set to soap off the stereotype image of Ravi Teja. He plays Chandu, a completely different character from the one as Idiot, where he was an outspoken, kooky weed wanting to be an IPS officer. This time around, he's an outspoken, kooky weed wanting to be a kick boxing champion! With that much originality and a little more in the form of the first song not being a rip-off of a Nokia ringtone*, Chandu revels in his 'original' world containing:

1. His mom: Played by Jayasudha, is a typical screen mother - very unconventional. Actually, she acts like an irresponsible dweeb but 'unconventional' sounds cuter! Cutting parties & discos is no problem but discussing the whereabouts of his father with a fully grown son? Definitely a problem, especially when the script demands a few more reels of the 'my-mother-is-my-overgrown-friend' schtick. Any resemblance to the mother character in Yuvakudu is merely coincidental. If you're stupid enough to believe that!

2. A Tamil chick: Played by Asin, is actually called 'Chennai' in the entire film because her real name sounds like a dialogue from Mr. India delivered by Scooby Doo (Mugambika Ambala)! So much for an important character that's serious enough to make it to the title of the movie. But let's not jump the gun and make rash conclusions. Give the girl some credit: songs are considered a serious part of our movies. Any resemblance to the heroine in every other movie is to be vehemently ignored!

3. His dad: Played by Prakash Raj, is a repenting father and a coach. Firstly, a repenting father for reliving a father role similar to that of Salman Khan in Jab Pyar Kisi Se Hota Hai and a repenting coach for imitating what was done to death by the coach in the yawn Thammudu! Then, he's also repenting for leaving his son Chandu and his mom for a career in kickboxing.

On her deathbed, Jayasudha reveals the identity of his father and persuades Chandu to go live with him in Vizag. Losing his best friend, Chandu is in great pain, in a dilemma and in the next train to Vizag. Once there, the effervescent love-hate chemistry between Prakash Raj & Ravi Teja sparks off, making up for the lack of any substance in the flick. Well, almost. 20 minutes are not exactly an idea of fun in an entire 2 and half hours. Except of course, if you're an ogling grandpa on the wonder drug! Or a grandma with him!

Meanwhile, Chandu starts another innings with his 'Chennai' gal. A couple of songs and some gobbledygook humor later (any resemblance to B4U's "Maaf Pj" not legal, as both have been lifted from cheap joke books!), we're almost to the end but for the reason that cost the flick 2 full stars: Kickboxing.

Kickboxing is suave and macho, unlike just kicking & boxing. Chandu's dad found that out early, to become a 6-time National champ. Now as an established coach he's nurtured a muscular badass who will obviously turn the tables at the end to fight against Chandu. This also gives Chandu a chance to do the preparation routine just like the one seen in Bhadrachalam, only worse & totally unreal. After witnessing the first fight, if you're wondering why an expert is needed for punching wildly & kicking chaotically, then you're utterly mistaken. Stunt directors are not always experts!

Held efficiently in a Thermocool built ring, the championship fight sees the hero as the victor only because he recollects the precious tip from his daddy-coach. Wearing next to nothing; having a hurting, purple, swollen eye; mouth splattered with overflowing blood; cheekbones broken; nostrils flaring up in a frantic effort to breathe, he follows that all-important rule: relax and concentrate.

Brimming with many fallacies, the flick might as well have been appropriately named:

ADVERTISEMENT
This page was tagged for
mashooka movie in tamil in hd
amma nanna o tamil ammayi hd images
idiot Amma Nanna Tamil Ammayi songs download naa songs
amma annan tamil ammayi naa songs
amma anna o tamele ammya telugu naa songs
Follow @fullhyderabad
Follow fullhyd.com on
About Hyderabad
The Hyderabad Community
Improve fullhyd.com
More
Our Other Local Guides
Our other sites
© Copyright 1999-2009 LRR Technologies (Hyderabad), Pvt Ltd. All rights reserved. fullhyd, fullhyderabad, Welcome To The Neighbourhood are trademarks of LRR Technologies (Hyderabad) Pvt Ltd. The textual, graphic, audio and audiovisual material in this site is protected by copyright law. You may not copy, distribute, or use this material except as necessary for your personal, non-commercial use. Any trademarks are the properties of their respective owners. More on Hyderabad, India. Jobs in Hyderabad.