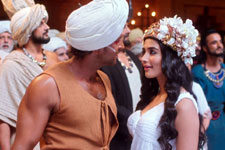 Jaiwantika Dutta-Dhupkar / fullhyd.com
EDITOR RATING
4.0
Performances
Script
Music/Soundtrack
Visuals
6.0
4.0
3.0
6.0
Suggestions
Can watch again
No
Good for kids
No
Good for dates
No
Wait for OTT
Yes
Ashutosh Gowarikar's Mohenjo Daro is an incredible film about impossibilities. It takes real life and distorts it into something bizarre and incomprehensible. And there can be no justification for an experiment like this.

First, the story. Sarman (Hrithik Roshan) is a poor farmer and the local hero who grows indigo with his uncle and aunt in Amri. He dreams of travelling to Mohenjo Daro, which is the Big Bad City that has always enticed him. He eventually gets there, only to discover that all is not right - the people are exploited by chieftain Maham (Kabir Bedi), his son Moonja (Arunoday Singh) and their gang of henchmen. He also falls in love with Chaani (Pooja Hegde), the daughter of the priest (Manish Chaudhary), who is betrothed to Moonja.

Chaani and Sarman get their love story going in the midst of opposition, even as Sarman discovers his roots in the city, defeats the goons and saves the city from the flooding Indus. There's also a subplot about how Maham builds a dam on the Indus to mine gold from the Indus. His plan is to buy weapons from the Sumerians and wage war against the Harappans.

The film itself is an all-too-familiar feudal drama, with some modern-day dilemmas tossed into the mix. So we have a rather politically active public concerned about issues like the construction of dams, trade laws and so on in the quasi-democracy that Mohenjo Daro supposedly is. However, the main problem with Mohenjo Daro is the number of historical facts the film mangles. The movie appears to be made for and by people who think that interpretation and opinion make a truth complete - making this one a convenient film for our times.

So democracy, if the makers are to be believed, existed in India long before the Greeks even thought about it. Then, all through the movie the makers seem to forget that Mohenjo Daro is the name of an archaeological site, not of a city. So we have Sarman saying things like "I want to go to Mohenjo Daro..." among other things. And the film has its eras all mixed up, too - and so we have some examples of Indo-Aryan culture thriving amidst all that Indus Valley Civilization culture in the form of the brahminical priest and his daughter who is no shaman although she is Sarman's love interest.

Taking the Indus Valley Civilization and spinning a love story around it is a good idea, but let's not forget that several historians and researchers have spent their entire lives studying the subject. It isn't just a simple chapter in a school textbook. The argument that there is insufficient material in existence about the Indus Valley Civilization is untrue as it is - but if the makers were unable to find any good books to read, why bother making the film? There really wasn't any pressure.

Messing with history is sacrilege enough for most, but Mohenjo Daro falters on a cinematic level as well. For example, there's an unintentionally comic scene where Sarman (Hrithik Roshan) battles two Caucasian cannibals, gladiator-style. Films which vilified Caucasian characters supposedly went out by the '90s, but here is this gem - and it has Hrithik Roshan in the lead, no less.

There are also a lot of things that are unexplained about the movie and too many people hanging around doing nothing. Much of the fervour and fantasy in the film is created with the help of large crowds, loud percussion, big sets and fancy VFX.

The art direction is one of the plus points in this otherwise brain-dead film. The action sequences are well-choreographed, too - one of the film's lovable scenes is that of Hrithik Roshan swimming across the Indus river in spate. This rivals his previous work in Krishh and Koi Mil Gaya in sheer superhero power. And the scene where Sarman fights the Caucasian cannibals looks quite similar to one from Jodha Akbar where Akbar bounces off walls to tussle with a pachyderm.

The dances are rather pedestrian, though. And the music (A R Rehman) is a disappointment. The film is also poorly edited (Sandeep Francis) - it trails off in places and occasionally loses the drift. As for the direction, if it's not already clear, this is one of Gowarikar's less impressive works.

Mohenjo Daro is too boring to be a "time-pass" film, and takes facts too trivially to be a "serious" history film. Watch it for the cast and the art direction, maybe the VFX. Better still, don't watch it at all. 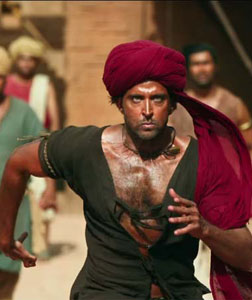 ADVERTISEMENT
This page was tagged for
Mohenjo Daro hindi movie
Mohenjo Daro reviews
release date
Hrithik Roshan, Pooja Hegde
theatres list
Follow @fullhyderabad
Follow fullhyd.com on
About Hyderabad
The Hyderabad Community
Improve fullhyd.com
More
Our Other Local Guides
Our other sites
© Copyright 1999-2009 LRR Technologies (Hyderabad), Pvt Ltd. All rights reserved. fullhyd, fullhyderabad, Welcome To The Neighbourhood are trademarks of LRR Technologies (Hyderabad) Pvt Ltd. The textual, graphic, audio and audiovisual material in this site is protected by copyright law. You may not copy, distribute, or use this material except as necessary for your personal, non-commercial use. Any trademarks are the properties of their respective owners. More on Hyderabad, India. Jobs in Hyderabad.