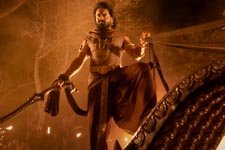 T J Reddy / fullhyd.com
EDITOR RATING
4.0
Performances
Script
Music/Soundtrack
Visuals
5.0
2.0
7.0
2.0
Suggestions
Can watch again
No
Good for kids
No
Good for dates
No
Wait for OTT
Yes
As I settled into my seat and waited for the Nandamuri-based studio logos to pass by the big screen, a thought made its way through my mind. "I come into movies expecting so little these days," my inner voice said.

Through the over 2-hour and 30-minute runtime of Bimbisara, I pontificated on this one line of thought. Why have my expectations for films lowered? There could be one of two reasons. If you have time to spare, I'll elaborate on those reasons.

Reason 1: I want the movie to succeed. Hence I subconsciously make the film underpromise so it can surprise me and subsequently overdeliver.

Bimbisara stars Nandamuri Kalyan Ram and is written and directed by debutant Vassishta. It follows a phase in the life of an evil, mythical and all-conquering king. Bimbisara is transported from his period to the present day through a magical mirror. He tasks himself to understand his new environment, find his way back home, and learn a moral or two along the way. I'm happy I kept my expectations low. With this plot line, this film could overdeliver.

As I've been informed multiple times on the internet, this is Kalyan Ram's most daring venture. The money at stake here is massive; hence, this film must succeed. That is a whole lot of pressure on a fresh-faced director. As this film played out, I couldn't help but think back to S S Rajamouli and his larger-than-life projects. As discussed in our review of RRR, Rajamouli's ascent into managing massive stars, enormous budgets and maddening scales didn't happen overnight. There is a learning curve from film to film, and those learnings culminate in the next blockbuster.

Director Vassishta and his inability to manage spectacle with an engaging and heartfelt screenplay are unmistakable from scene to scene. There isn't a lot of material to crack jokes about this movie; it isn't funny as much as it is misguided. Silly choices such as having a crocodile in a puddle, employing tribal security guards for a door powered by magic, and a policewoman who wears shorts on the job are head-in-your-hands inane. It is silliness masquerading as grandeur.

As this movie is heavily derivative of Rajamouli's work, let's compare one of its scenes with one from a Rajamouli film. Both films have the mistreatment of a child as a crucial plot point. In Chatrapati, a baddie hurts a little boy, and in Bimbisara, the titular mad king attacks a little girl. While on the surface both scenes look the same, the execution of these scenes makes a world of difference.

In Bimbisara, the little girl respects God, is all about lighting lamps, and looks like a million bucks even though she lives among a cluster of poor doctors. Simply put, she doesn't behave like a child. She acts like a cardboard cutout of a child. In Chatrapati, the script tells us the boy's motivation in one line of dialogue, and then we see him interact with the world around him. He isn't a standee in the world. He is a part of it.

The boy has a relationship with Shivaji, his gang, a local shopkeeper, and the villains. Once the boy gets hurt, the film holds on to his plight for an excruciating amount of time. The inability of the townsfolk to help him adds stakes and drama to the world the film is building. Every bit compounds on the other to get the viewer invested in the story.

If the scale, scope, VFX and budget make movies similar, we could speak about Jurassic Park and Jurassic World in the same regard. But we do not, and with good reason.

Bimbisara has Kalyan Ram acting his heart out, but the pitch of that performance never seems to align with that of the film. The film has two lead actresses, but they seem to be around to fill a quota than to help tell a story. It has a villain too. He's so terrifying that I could write another essay about how I don't remember a thing about him. There are black magicians, ayurvedic healers, Vennela Kishores and much more. The film throws everything you're supposed to like at you, hoping you latch on. But I found myself relating to the multiple disinterested and uncoordinated extras populating many a shot.

In line with Kalyan Ram's performance, M M Keeravani powers the film with opulent music. This rich score overpowers the scenes it is supposed to underscore. The lack of conviction in these scenes directly contradicts the strength of Keeravani's work. The two facets of the film that sync perfectly with the overall product are its cinematography and editing. These essential bits are immensely amateurish for a production of this scale.

Many shots begin a few frames too early, and many scenes lack continuity with the sequences of which they are a part. Sunlight appears from two directions in the same shot, there's a general lack of finesse in shot composition and a lack of mood with the lighting, and the list goes on and on. Instead of elements building on top of one other to provide a memorable climax, Bimbisara provided an ending that left the audience in my cinema hall howling with laughter at how cheesy and gimmicky everything looked by the end.

While we commend Kalyan Ram for betting on himself and truly pushing his range as an actor, we need to be impartial and call this spade a spade. We wish him well in his endeavours and hope another Athanokkade finds his way to him sooner rather than later.

Before I forget, the second reason I walk into films with low expectations.

Reason 2: I watch more Bimbisara(s) than RRR(s). The odds aren't in my favour. I might just be playing the field and protecting my downside. 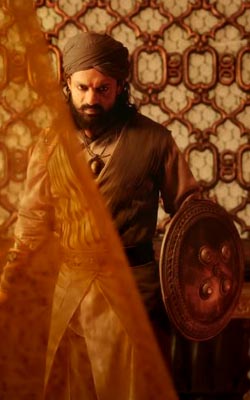 ADVERTISEMENT
This page was tagged for
Bimbisara telugu movie
Bimbisara reviews
release date
Nandamuri Kalyan Ram, Catherine Tresa
theatres list
Follow @fullhyderabad
Follow fullhyd.com on
About Hyderabad
The Hyderabad Community
Improve fullhyd.com
More
Our Other Local Guides
Our other sites
© Copyright 1999-2009 LRR Technologies (Hyderabad), Pvt Ltd. All rights reserved. fullhyd, fullhyderabad, Welcome To The Neighbourhood are trademarks of LRR Technologies (Hyderabad) Pvt Ltd. The textual, graphic, audio and audiovisual material in this site is protected by copyright law. You may not copy, distribute, or use this material except as necessary for your personal, non-commercial use. Any trademarks are the properties of their respective owners. More on Hyderabad, India. Jobs in Hyderabad.