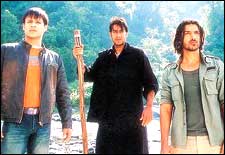 Ghazala Rizvi / fullhyd.com
EDITOR RATING
5.0
Performances
Script
Music/Soundtrack
Visuals
NA
NA
NA
NA
Suggestions
Can watch again
NA
Good for kids
NA
Good for dates
NA
Wait to rent it
NA
If you are brazen enough to make a movie that has no songs with skimpy clad babes in exotic locales, but only skimpy clad babes in exotic jungles, you got to back it up with some concrete story. Like the virgin roads of the pseudo Orbit Park, Kaal entirely misses out on the fun.

You can actually see the attempt that went into making Kaal appear nonsensical. Set in the best of places a thriller could ask for, with a talented cast like Ajay and Vivek, Kaal still manages to turn up a lame show. The jungle has been shot in at its worst, in the dry season, neither sporting the freshness nor the lushness it is known for. As if on cue, the tigers too couldn't have acted more disinterested.

The first half of the movie proceeds at the same speed as an unpopped corn, traveling from your mouth to the theater floor, does. Krish (John Abraham) is a National Geographic researcher who sports a slithering pet snake and a sinuous wife, Ria (Esha Deol). Together they set out to investigate the case of bizarre deaths happening in the Orbit Park.

Dev (Vivek Oberoi), Rishika (Lara Dutta), Sajid (Kushal Punjab) and Vishal (Vishal Malhotra) are bent on getting some kicks from life, and so they venture into the same Park. Fortunately both parties end up getting car-wrecked, and manage to position themselves in the tiger territory. That makes a total of six sitting ducks for the kill - enough to kill the 2 1/2 hours.

The boys spend time prowling about the terrain, while the girls try to look ruffled in their parlor-perfect looks. There is some petting, less talking, some more prowling by the dudes and some more attempts by Esha and Lara to look not out-of-place in a movie which has nothing for them to do. The movie also has nothing for the others to do too, which is a fact you should have got across when Shah Rukh Khan did an item-number.

Kaali has a bee in his bonnet about following the jungle rules - like, not going near water brooks which look like water brooks, and not crossing the bridge on foot, which also could not be crossed by any other way.

The sheer illogic of all the killings, the missing tigers, the immense paucity of speech, and the desperate attempts of John Abraham to perfect monosyllables, become too much - even for the writers to handle - so they toil to get out of this one.

To tie the glaring loopholes, they come up with a very novel idea - blame it all on God Almighty and his spirits, and just go home. Time-up for Kaal, and might also be so for Shah Rukh-Karan joint-fiasco. The movie might also do a bad one for Vivek Oberoi, who appears to look uncomfortable in the role of out-of-time bonhomie, and Ajay Devgan, who looks simply embarrassed.
Share. Save. Connect.
Tweet
KAAL SNAPSHOT

ADVERTISEMENT
This page was tagged for
kaal movie movie
kaal hindi movie
kaal movie in hindi
Hindi movie Kaal
Kaal Hindi movie
Follow @fullhyderabad
Follow fullhyd.com on
About Hyderabad
The Hyderabad Community
Improve fullhyd.com
More
Our Other Local Guides
Our other sites
© Copyright 1999-2009 LRR Technologies (Hyderabad), Pvt Ltd. All rights reserved. fullhyd, fullhyderabad, Welcome To The Neighbourhood are trademarks of LRR Technologies (Hyderabad) Pvt Ltd. The textual, graphic, audio and audiovisual material in this site is protected by copyright law. You may not copy, distribute, or use this material except as necessary for your personal, non-commercial use. Any trademarks are the properties of their respective owners. More on Hyderabad, India. Jobs in Hyderabad.