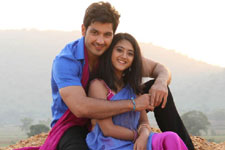 Kritika Deval / fullhyd.com
EDITOR RATING
3.5
Performances
Script
Music/Soundtrack
Visuals
4.0
3.0
5.5
6.0
Suggestions
Can watch again
No
Good for kids
No
Good for dates
No
Wait for OTT
No
Siddhansh (Ali Reza) was a very poor boy - so poor that our story begins at a dumpster. A baba picks the boy up, and takes him along on a musical journey, aka begging while singing. As this hapless boy becomes an adult, the baba dies, leaving Siddhansh with a love for music that he soon monetizes via winning Indian Idol, along with a great deal of name, fame, and money.

However, he is still the same lonely waif at heart, and yearns for what he never had - a hole in his heart the shape of a heart (emoji style). Circumstances ensue, and this hole is filled by his new phone buddy, Akshara (Shriya Sharma), a big fan of Siddhansh the singer and a brand new friend to Siddhu.

The rest of the story takes exactly the cliché-ridden, angsty, headache-inducing "musical" "love" "story" that you expect it to be. Take a good long look at the quotation marks in that last sentence. That is how confused this film is. A mind-numbingly routine tale of love lost-and-found, Gayakudu combines a stiflingly heavy narrative with performances cloying enough to be dangerous to the insulin impaired. Add to the mix a comic sequence by Sapthagiri that seems like the cinematic equivalent of a '90s sitcom laugh track, and you're left wondering why our filmmakers seem to feel that cinema is so vital to our existence that we need a minimum quota to be filled every week, whether or not a movie has already been made a million times.

Siddhansh has to deal with the fact that he is a double-crossing emotional wreck of a person, while Akshara has a despotic family to contend with. And so you get one icky scene after another gooey one, all while you wait for the inevitable ending that you, the viewer, know about half hour into the film. Granted, these histrionics are rendered fairly competently by our lead pair, especially by Shriya Sharma, a familiar face in Tollywood as a child artiste, but the lack of even one line that people might utter naturally in a conversation makes their above-average expressiveness come off as stilted.

Ali Reza is okay, but is a bit overwhelmed by his emotion-heavy character. Shriya Sharma is bright and pretty and expressive, and we wish better movies on her. Sapthagiri is wasted, as is the rest of the comedy battalion that our filmmakers invariably over-season films with.

The camera work is acceptable, but is let down by soap-opera level production values. The much vaunted soundtrack is nowhere near as memorable as it is touted to be, but is easy on the ears, and the songs are shot well.

Gayakudu is the kind of angsty, weepy romance that went out of style at least a decade ago, and is as uninteresting as it is unoriginal. If it's the music that you want, you'll do better to tune in to the radio at just about any time of the day.
Share. Save. Connect.
Tweet
GAYAKUDU SNAPSHOT 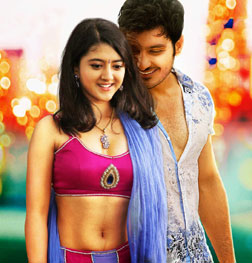 ADVERTISEMENT
This page was tagged for
fitting master telugu full movie download in sun next
movierulz com 2015 gayakudu
gayakudu full movie download
gayakudu movie download in tamilrockers
telugu gayakudu full movie download
Follow @fullhyderabad
Follow fullhyd.com on
About Hyderabad
The Hyderabad Community
Improve fullhyd.com
More
Our Other Local Guides
Our other sites
© Copyright 1999-2009 LRR Technologies (Hyderabad), Pvt Ltd. All rights reserved. fullhyd, fullhyderabad, Welcome To The Neighbourhood are trademarks of LRR Technologies (Hyderabad) Pvt Ltd. The textual, graphic, audio and audiovisual material in this site is protected by copyright law. You may not copy, distribute, or use this material except as necessary for your personal, non-commercial use. Any trademarks are the properties of their respective owners. More on Hyderabad, India. Jobs in Hyderabad.