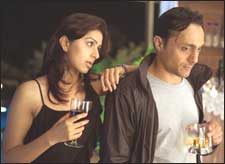 Himabindu Chitta / fullhyd.com
EDITOR RATING
6.0
Performances
Script
Music/Soundtrack
Visuals
NA
NA
NA
NA
Suggestions
Can watch again
NA
Good for kids
NA
Good for dates
NA
Wait to rent it
NA
Silsiilay offers a glimpse of the private joys and sorrows of three women, as they set about making their existence more meaningful and complete. All three inhabit vastly different worlds, and their stories remain, for the most part, independent of each other.

Rehana (Tabu) is married to Anwar, a rich and promiscuous businessman, who is having an affair with Preeti (Celina Jaitley), an air hostess. Rehana is no stranger to Anwar's dubious doings, and has always borne them with quiet patience. But when Anwar decides to take the triple-talaq way out of his marriage, Rehana confronts her husband in a characteristically quiet rebellion.

What is beautiful about Rehana? Is it her typical Indian outlook that leaves her open to so much pain? Rehana is willing to be treated like a doormat, for she places family harmony above everything, and never loses her cool. Her true self is buried under mountains of tolerance. She has stopped listening to her persistent inner voice. All of us know someone like Rehana - our mothers and aunts live in Rehana's skin, speak in her soothing voice, shed her futile tears. No, what is beautiful is that Rehana finally breaks her silence, asserts her individuality and claims the respect she deserves.

Zia (Bhumika Chawla) is a popular actress, in love with Neel (Rahul Bose), a corporate executive. She is very clear on what she wants - a child with Neel, in or out of wedlock. Though he walks out of their live-in relationship, she does not give up on her dream, and in the end, her focused efforts bear fruit.

What is beautiful about Zia? She is strong, yet she knows that her love for Neel makes her vulnerable. She is independent, yet she fears loneliness and longs for companionship. Zia is a real character with negative shades. She is intensely jealous of Neel's new girlfriend, and makes a surreptitious tape of the latter's sexual escapades. Her vivacity is enchanting, and her glamorous, opulent lifestyle elicits an envy that many will never admit to.

Anushka (Rhea Sen) is a small-town girl at heart, but wants to be a streetsmart city-slicker. She agrees to go to a hotel room with her boyfriend Nikhil (Ashmit Patel) but once she gets there, she demands that he behave like a charming gentleman that he is not. Meanwhile, Tarun (Jimmy Shergill), a colleague at work, is in love with her. She's not interested, but he's willing to take a back seat and wait for her to change her mind. Which she does, eventually.

What's beautiful about Rhea? She is representative of contemporary Indian youth. In her mind is a pervading indecisiveness about sexuality, a confused attitude that vacillates from time to time. She wears revealing clothes but is unwilling to be intimate with a guy. She cannot decide if sex is serious or fun, and does not know where to draw the line. In the end she discovers that friendship, love and comfort come first, the sex follows later.

The movie scores with its multiple narratives, which are entertaining and give us an array of characters to identify with. Tabu makes a superbly restrained Rehana. Bhumika is at ease with her character, which she portrays with vigor and sensitivity. Rhea as Anushka is a mix of eye candy and real substance.

Kay Kay Menon is impressive in the shoes of Anwar, though the character itself is not very well-etched. Rahul Bose as Neel is predictably convincing, although it would be good to see him do something drastically different for a change. The same goes for Jimmy Shergill, who has played the chocolate-faced hapless lover far too often.

Divya Dutta pours life and charm into the character of Dia, Zia's younger sister. The role, however, is not suited to her age and appearance. Celina Jaitley, although a miserable failure as a heroine, is credible as the smooth and stylish Preeti. Ashmit Patel fails to make a mark.

The music is suitable and does not distract, though SRK as the trendy "sutradhar", does. But the innate simplicity of the stories and the good performances pull this one through.
Share. Save. Connect.
Tweet
SILSIILAY SNAPSHOT

ADVERTISEMENT
This page was tagged for
Silsiilay hindi movie
Silsiilay reviews
release date
Tabu, Bhumika Chawla
theatres list
Follow @fullhyderabad
Follow fullhyd.com on
About Hyderabad
The Hyderabad Community
Improve fullhyd.com
More
Our Other Local Guides
Our other sites
© Copyright 1999-2009 LRR Technologies (Hyderabad), Pvt Ltd. All rights reserved. fullhyd, fullhyderabad, Welcome To The Neighbourhood are trademarks of LRR Technologies (Hyderabad) Pvt Ltd. The textual, graphic, audio and audiovisual material in this site is protected by copyright law. You may not copy, distribute, or use this material except as necessary for your personal, non-commercial use. Any trademarks are the properties of their respective owners. More on Hyderabad, India. Jobs in Hyderabad.