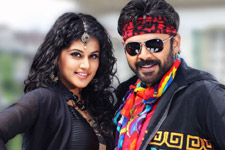 Ravi Kandala / fullhyd.com
EDITOR RATING
4.0
Performances
Script
Music/Soundtrack
Visuals
4.0
4.0
3.0
4.0
Suggestions
Can watch again
No
Good for kids
No
Good for dates
No
Wait for OTT
No
Meher Ramesh bases most of his movies on the lives of mafia dons. All the said dons live in Malaysia, and are always accompanied by skimpily-clad molls who do nothing but pose prettily at the edge of the frame. And however big a don he might be, he will die at the hero's hands in the aluminium factory set common to a million Telugu movies.

Shadow is no different. The movie seems to have been made for a Venkatesh 20 years younger than he is now, and hence also has a script that should have been written 20 years ago. It attempts to mix Meher Ramesh's brand of filmmaking, Venkatesh-style sentiment and Sreenu-Vytla-style comedy, and fails in a spectacular fashion.

The story is older than the hills, and one that any self-respecting Telugu filmgoer can foretell in his sleep. Raghuram (Nagendra Babu) is an investigative journalist who joins Nanabhai (Aditya Panscholi), an underworld don, to expose the latter's misdeeds. By the time he makes a conspicuous red hardbound folder detailing Nanabhai's crimes, he and his entire family, except his son Rajaram (Venkatesh), are killed. Rajaram then grows up with vengeance on his mind, and takes revenge in the guise of Shadow.

It is with this extremely engaging yawn... err... yarn that the director attempts to hold the audience's attention for well over two and half hours. The issues that plague Shadow are so numerous that we haven't finished officially listing them down yet.

To start with, the film lacks consistency. For the first half hour, the hero is someone consumed by hatred, and one with a monomaniacal goal of killing the villains. For the rest of the movie, however, he alternates among buffoonery, sentiment and action.

Then, everyone in the movie knows about Shadow, even though he always reveals his identity only before killing someone. Did the dead men come back and tell their tales? Only Meher Ramesh knows. Plus, the mafia kingpins are all killed with such ridiculous ease that real dons will be ashamed to see such poor on-screen depictions of themselves.

The songs are all of the variety that you will forget even as they are playing on-screen. They are only there to showcase Tapsee in a variety of outfits that are all either slit thigh-high or include skirts that wouldn't cover a one-month-old's bottom.

Venkatesh does his best, but the fact remains that he needs to move on. Shadow is a movie that he should have done in his prime - with the various get-ups that he gets to don, it could have been a treat. You can't blame him for not trying, though.

There are a host of others in the movie including Srikanth, Nasser, Suman, Kavitha and Madhurima, all of whom do what is required of them.

Aditya Pancholi, a bad actor even in his youth, has obviously grown worse with age. His depiction of an underworld don is unintentionally hilarious - better than the planned comedy track in the flick, actually. He is such a "fearsome" don that everyone everywhere knows his movements.

Shadow is the kind of a movie where the heroine enters the villain's den and does an item number along with the hero before the hero traps him. If you seriously have any hopes from such a film, go on and watch it. For the rest, stay clear of even the shadow of Shadow!
Share. Save. Connect.
Tweet
SHADOW (TELUGU) SNAPSHOT 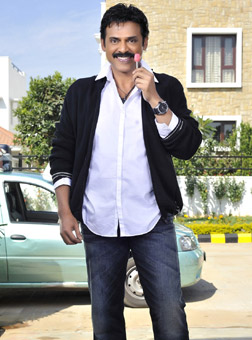 ADVERTISEMENT
This page was tagged for
Shadow (Telugu) telugu movie
Shadow (Telugu) reviews
release date
Venkatesh, Tapsee
theatres list
Follow @fullhyderabad
Follow fullhyd.com on
About Hyderabad
The Hyderabad Community
Improve fullhyd.com
More
Our Other Local Guides
Our other sites
© Copyright 1999-2009 LRR Technologies (Hyderabad), Pvt Ltd. All rights reserved. fullhyd, fullhyderabad, Welcome To The Neighbourhood are trademarks of LRR Technologies (Hyderabad) Pvt Ltd. The textual, graphic, audio and audiovisual material in this site is protected by copyright law. You may not copy, distribute, or use this material except as necessary for your personal, non-commercial use. Any trademarks are the properties of their respective owners. More on Hyderabad, India. Jobs in Hyderabad.