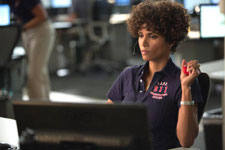 Kritika Deval / fullhyd.com
EDITOR RATING
5.5
Performances
Script
Music/Soundtrack
Visuals
7.5
5.0
7.0
7.0
Suggestions
Can watch again
No
Good for kids
No
Good for dates
No
Wait for OTT
No
An already disturbed 911 operator for the LAPD receives A Call That Makes Her Break All The Rules. And we just know that we're gonna get crap masquerading as, well, something not.

Right we are, too, for, The Call epitomizes camp and cheese from the first call answered by Jordan Turner (Halle Berry), to the last, completely implausible, frame, only to be redeemed by actors determined not to be let down by the things they are made to do, the gist of which is as follows.

Jordan, as we said, makes a living off of answering calls that range from "Where's the nearest Starbucks?" to "There's someone in my house! What do I do?!" When a call of the latter variety, by a young girl called Leah Templeton, turns into a disaster; Jordan spouts forth some cliché cop spiel, and swears off of taking calls.

A few months later, with Jordan now teaching, a rookie gets a call from a girl stuffed in the trunk of a car, which the former cannot handle. Not to worry! Jordan to the rescue! All over the phone, too!

The rest of the movie is a rather bizarre mix of a survival show, a slasher flick, and just plain disturbing. However, it is a well-made mix, if not-quite well paced. Despite the gripping beginning, if we and the people sitting around us were anything to go by, you'll find yourself increasingly restless after the first half hour or so.

There isn't much else that you can find fault with. Halle Berry is fantastic as usual. Although it's disturbing to see little Olive Hoover (from the movie Little Miss Sunshine) all grown-up and stripped down to her bra, Abigail Breslin is does a great job, stopping a hairsbreadth short of OTT. The Cake, however, goes to the kidnapper you'll love to hate and get thoroughly creeped out by, played by Michael Eklund. The mercurial actor goes from assured to pathologically nervous to maniacal, all in a blink and a half.

The rest of the actors exist only because the plot development requires it, and they do the job required of them.

Whimsical handling of the camera is supported by an equally wacky soundtrack, both of which are used effectively.

Despite gaping holes in logic, and short stretches that seem interminable, The Call has two things going for it - 1. It's the kind of story you have to see through to the end, and, 2. It has wonderful people who worked to bring it to life. It is a good thing, then, that the whole of it only lasts an hour and a half.
Share. Save. Connect.
Tweet
THE CALL SNAPSHOT 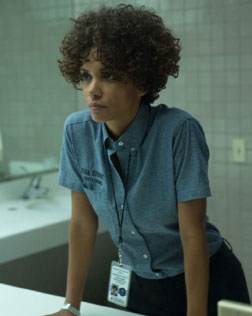 ADVERTISEMENT
This page was tagged for
The Call english movie
The Call reviews
release date
Halle Berry, Abigail Breslin
theatres list
Follow @fullhyderabad
Follow fullhyd.com on
About Hyderabad
The Hyderabad Community
Improve fullhyd.com
More
Our Other Local Guides
Our other sites
© Copyright 1999-2009 LRR Technologies (Hyderabad), Pvt Ltd. All rights reserved. fullhyd, fullhyderabad, Welcome To The Neighbourhood are trademarks of LRR Technologies (Hyderabad) Pvt Ltd. The textual, graphic, audio and audiovisual material in this site is protected by copyright law. You may not copy, distribute, or use this material except as necessary for your personal, non-commercial use. Any trademarks are the properties of their respective owners. More on Hyderabad, India. Jobs in Hyderabad.