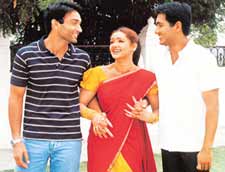 Mishaps, misunderstandings, mistakes, misgivings, misadventures, miscellaneous twists... there are so many 'misses' in Nee Sneham, you may as well give this one a miss and spare yourself this misery. The posters proclaim 'Don't miss the beginning'. That's absolutely right, 'cos the only spirited moments in the movie are the football match in Kolkata and a tour of the City Of Joy that appear before the opening credits.

While the film keeps away from the love triangle (despite the presence of two guys in the lead, and friends at that) and the run-of-the-mill college romance, it fails to do a decent job of the rather novel storyline. The entire story is so convoluted that you wish you took a notepad to write down the sequence of events. 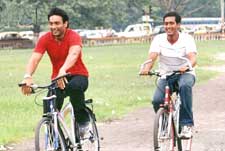 Madhav (Uday Kiran) and Seenu (debutant Jatin, the Vimal model) are jigri dosts and football players of the Andhra Pradesh team. An accident in Kolkata leaves Seenu risking his life for his pal and losing his foot as a result. Madhav, therefore, is indebted to Seenu for life for sacrificing his life and career.

Enter Amrutha (Aarti) in a shared auto-rickshaw, and Madhav's heart does a somersault and crashes into his teeth. He tries to befriend her, but a series of misunderstandings (first round) lead the girl to hate Madhav. She hates him even more when her wedding is called off because of him. Nevertheless, lover boy can't get over the girl and continues to adore her. He secretly helps her overcome her grandfather's death, pay off huge debts tide over several problems in life, etc. 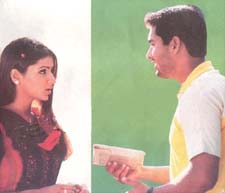 On the other hand, due to another fresh set of mistaken identities (second round), Amrutha is led to believe that Seenu is her secret admirer and decides to marry him, for she is indebted to this low key do-gooder. Madhav is unable to reveal the truth to the girl because he is indebted to his friend and wants him to have the nice girl.

Again, after the third round of misunderstandings, the girl realises she is marrying the wrong guy. It's colossal chaos now, and towards the fag end, the mess is cleared up when they all decide to talk each other sensibly.

Aarti has a heavy role, but she emotes so poorly that you decide to focus on her appearance instead, only to realize she makes a damn good model for a 'before and after' ad for obesity. If she decides to keep baring her midriff, she better start doing some ab exercises. The charm she had barely a year ago in Nuvvu Naaku Nachchaav is completely lost in this one, and her makeup only makes her look worse.

Newcomer Jatin gets a raw deal. He looks plaintive and evokes sympathy. Amidst such a melancholy cast, Uday Kiran stands out (seriously!) because he gets the best role. Though he has come a long way since Nuvvu Nenu, he has miles to go before he can smile as an 'actor'.

The music is the only redeeming factor in the movie. RP's score, as usual, is soothing and haunting. However, the grim tenor of the movie offsets the other elements.

Watch Nee Sneham, and you don't have to look up the meaning of migraine.
Share. Save. Connect.
Tweet
NEE... SNEHAM! SNAPSHOT
See Nee... Sneham! full details
NEE... SNEHAM! USER REVIEWS
1 - 8 OF 8 COMMENTS
POSITIVE  |  NEGATIVE |  NEWEST  |  OLDEST  |  MOST HELPFUL  |  LEAST HELPFUL
USER RATING
6.3
135 USERS
Performances
Script
Music/Soundtrack
Visuals
NA
NA
NA
NA
Can watch again - NA
Good for kids - NA
Good for dates - NA
Wait for OTT - NA
Sai Kiran on 4th Jan 2019, 9:01am | Permalink
worst review...movie is completely good with proper message ..by the way who are you to comment on Arthi Agarwals appearance..its just the matter of taste you dont have give any fake reviews and comments.Arthi is absolutely stunning in traditional attire.
A Prasad on 5th Nov 2002, 10:41pm | Permalink
Ur review is totally one sided.
the movie z so good.performance of udaykiran z so natural.I think this movie will become a biggest hit in recent times.
RATING
10
Smoking Rock on 5th Nov 2002, 2:52pm | Permalink
Painful flick. I have seen many reviews here on Aarti movies and u r absolutely correct that this girl sucks man. I don't know why people in AP accept such bullish babes in our industry. These babes come from bollywood "where they taste biggest failure" and show their skin and just give credits to themselves that they have achieved success - what bullshit? You people are always being true to movies, I like ur reviews, good going.
RATING
4
Napster on 5th Nov 2002, 11:36am | Permalink
To all those whining about Fullhyd telugu movie reviews: Telugu movies do not deserve any better. In fact I think fullhyd is a generally soft in its reviews. I think their reviews should be more scathing, especially targeting the film makers. 99.99 % of telugu movies are just plain horrible. The golden era of the 40s, 50s and 60s will never return. We did see a few of flashes in the mid 80s with movies from K. Vishwanath e.g Sagara sangamam and sankarabharanam (two of his best). With the average IQ of a telugu movie viewer in the fractions, Don't expect anything to change for the next billion years. It will only get worse.
Good Job fullhyd.com. (for the record, I am not affiliated with fullhyd.com and I do find some of their reviews partial)
RATING
2
Kaka Kaki on 5th Nov 2002, 10:45am | Permalink
Its a totally screwed up movie. For people of IQ 45.
RATING
2
Ramana on 5th Nov 2002, 3:21am | Permalink
This movie sucks big time, big headache movie
RATING
2
Ravi Sriram on 4th Nov 2002, 11:33pm | Permalink
dear guys
i am sorry if i hurt you. why dont u get reviewers who can understand telugu properly and watch the film from heart rather than the ones who want to show their command on sarcastic english language at the cost of good film makers?
RATING
2
Rakesh Anand on 4th Nov 2002, 10:48pm | Permalink
Hey Guys at Full Hyd, I am eagerly waiting for a review of a film from you with a good opinion. Would I be ever able to see one like that? I don't understand why the guys who seems to hate movies are given an opportunity to review movies. Grow up guys and start reviewing with a film in mind and not a reality....or you guys at Full Hyd can do a movie so that you could come up against all the odds you write about every other movie.
RATING
6
LEAVE A COMMENT
fullhyd.com has 700,000+ monthly visits. Tell Hyderabad what you feel about Nee... Sneham!!
MORE MOVIES
Latest Reviews
Don't Worry Darling
Vikram Vedha
Ponniyin Selvan - 1
Naane Varuvean
Nene Vasthunna
more
Krishna Vrinda Vihari
Saakini Daakini
Where the Crawdads Sing
Everything Everywhere All At...
Aa Ammayi Gurinchi Meeku Che...
Brahmastra: Part One - Shiva
Oke Oka Jeevitham
Brahmastra: Part One - Shiva
Ranga Ranga Vaibhavanga
First Day, First Show
Contemporary Reviews
Holi
Ek Aur Ek Gyarah
National Security
The Recruit
Hollywood
more
Dostana (Amitabh)
Welcome To The Jungle (Hindi...
Shakti (Hindi)
Rishtey
Matrix Reloaded (Hindi)
Red Dragon
Terminator 3 Rise Of The Mac...
Star Wars: Episode I - The P...
Hai
Random Reviews
Hungama (Telugu)
Okkade
Munich
The Reaping
Mirrors
more
The Wolfman (Hindi)
Coffee Bar
Wrath Of The Titans
Aashiqui 2
Total Siyapaa
Paddanandi Premalo Mari
Srirastu Subhamastu
Tera Intezaar
Spider-Man: Far From Home
Ramarao On Duty
SEARCH MOVIES
Dissatisfied with the results? Report a problem or error, or add a listing.
ADVERTISEMENT
SHOUTBOX!
{{todo.name}}
{{todo.date}}
[
ip{{todo.ip}}
]
{{ todo.summary }}... expand »
{{ todo.text }} « collapse
First  |  Prev  |   1   2  3  {{current_page-1}}  {{current_page}}  {{current_page+1}}  {{last_page-2}}  {{last_page-1}}  {{last_page}}   |  Next  |  Last
{{todos[0].name}}

ADVERTISEMENT
This page was tagged for
Nee Sneham film
Nee... Sneham! telugu movie
Nee... Sneham! reviews
release date
Uday Kiran, Aarti Agarwal
Follow @fullhyderabad
Follow fullhyd.com on
About Hyderabad
The Hyderabad Community
Improve fullhyd.com
More
Our Other Local Guides
Our other sites
© Copyright 1999-2009 LRR Technologies (Hyderabad), Pvt Ltd. All rights reserved. fullhyd, fullhyderabad, Welcome To The Neighbourhood are trademarks of LRR Technologies (Hyderabad) Pvt Ltd. The textual, graphic, audio and audiovisual material in this site is protected by copyright law. You may not copy, distribute, or use this material except as necessary for your personal, non-commercial use. Any trademarks are the properties of their respective owners. More on Hyderabad, India. Jobs in Hyderabad.