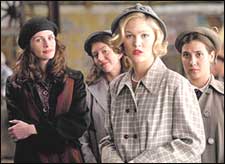 Charisma Murari / fullhyd.com
EDITOR RATING
7.0
Performances
Script
Music/Soundtrack
Visuals
NA
NA
NA
NA
Suggestions
Can watch again
NA
Good for kids
NA
Good for dates
NA
Wait for OTT
NA
It's with great felicity, beatitude, gusto and other big words that we don't understand that we must announce that Mona Lisa Smile is one movie that contains nothing that is even quasi sine qua non. Rats! More big words we don't understand.

But what we do understand is that Julia Roberts plays Katherine Watson, a teacher of art-history who is committed to shattering the stereotypes that women feel compelled to conform to in 1950s America.

Lighting a match in the vicinity of the oil slick are the students who give her a bit of a hard time before settling into her groove. A few torrid explosions later, all the students are won except for Betty Warren (Kirsten Dunst).

But then Betty is the kinda gal who has a carton of 'super-bitch' cornflakes the size of a bus, every morning for breakfast. All Betty aspires to do is get hitched to an upwardly mobile Harvard grad, get snide with her friends, and hope that her non-blonde roots don't show from under the beret.

Betty has a mother from hell - the kind that we thought perished when the Japanese stopped making white-horror films. Her best pal Giselle Levy (Gyllenhaal) is sleeping with an Italian professor who wears an expression of someone who has an evil jock itch. And between them, the two girls represent the two ends of a very broad spectrum of sexual expression.

Julia Stiles plays Joan Brandwyn, another senior who is a brilliant, 'straight A' pre-law student who is willing to give up an admission into Yale just so could adopt 'the role she was born to fill' i.e. get married.

Mona Lisa Smile traces Watson's journey as she influences the lives of her students. Its portrayal of Roberts' evolution from persona non grata to philosopher and confidante is compelling. The battles that she picks in order to assert not just her individuality but that of woman-kind, are relevant still.

You know all along how this film is going to turn out. But, it doesn't matter. You know that Watson will prevail and that Betty will have to see it too but you are still touched when the moment arrives.

Gyllenhaal is brilliant in her portrayal of Giselle. Julia Roberts is a little lack-lustre. Sometimes, just sometimes, you find yourself wondering what Mike Newell was trying to do. But all in all, this one merits one trip to the theatre.

ADVERTISEMENT
This page was tagged for
Mona Lisa Smile english movie
Mona Lisa Smile reviews
release date
Julia Roberts, Kirsten Dunst
theatres list
Follow @fullhyderabad
Follow fullhyd.com on
About Hyderabad
The Hyderabad Community
Improve fullhyd.com
More
Our Other Local Guides
Our other sites
© Copyright 1999-2009 LRR Technologies (Hyderabad), Pvt Ltd. All rights reserved. fullhyd, fullhyderabad, Welcome To The Neighbourhood are trademarks of LRR Technologies (Hyderabad) Pvt Ltd. The textual, graphic, audio and audiovisual material in this site is protected by copyright law. You may not copy, distribute, or use this material except as necessary for your personal, non-commercial use. Any trademarks are the properties of their respective owners. More on Hyderabad, India. Jobs in Hyderabad.