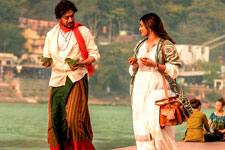 T J Reddy / fullhyd.com
EDITOR RATING
6.0
Performances
Script
Music/Soundtrack
Visuals
9.0
6.0
9.0
5.0
Suggestions
Can watch again
No
Good for kids
No
Good for dates
Yes
Wait to rent it
No
In an interview before Qarib Qarib Singlle's release, director Tanuja Chandra said that stories like this one finding their way to the theatres was a sign of times changing. She emphasized that audiences had outgrown formulaic stories that involved college-going couples, and were more than open to listening intently to the stories men and women in their 30s (the Indian version of middle age) had to tell.

While there is an element truth in that statement with films like Cheeni Kum gracing our screens, the trailer preceding this film had a preview of Sunny Leone-starrer Tera Intezaar woven into it. Let's put those square pegs and round holes together and make of that what we will.

The ambition (which is ever so slight) in Qarib Qarib Singlle manifests itself through its lead female character Jaya played by Malayalam actress Parvathy Thiruvoth Kottuvatta. Her character in this movie feels like an extension of the role she so elegantly played in the 2006 Kannada film Milana. Jaya is a 35-year-old overworked widow who lacks a social and sexual life. She is often prone to forgetting the world that forgot about her, but only until the societal norm for companionship rears its head. After breaking the fourth wall and talking to the audience for a bit, Jaya signs up to dating service Abtaksinglle.com.

Her match based on the most superficial of criteria is Viyogi (Irrfan Khan) - a free-spirited, outspoken and confident poet, who lives in the moment and has three previous relationships to reflect upon. With an excuse more or less as flimsy as that of Jia Aur Jia's twins for sharing a road trip, the duo strike up a contrived rapport and find themselves journeying from Hrishikesh to Alwar to Gangtok. They are out to prove the validity in Viyogi's sentiment that his ex-es miss him to this very day, and in true cinematic fashion, their search for answers to the shallow ends up revealing deep truths about the people they are. How original and what fun!

Qarib Qarib Singlle goes from being a hack director's exercise in vanity to a thoughtful story ( at least in parts) about an age bracket of people cinema doesn't care about unless they're conventionally attractive. The character descriptions might seem stereotypical, but the undercurrent of emotion that makes them who they are is always palpable.

Even though they seem poles apart, Jaya and Viyogi have an many traits in common. That fact that neither of them has either time or space for a new person in their lives is the easier of themes to catch, but what lurks beneath is Viyogi's state of despondence under his confident veneer. Viyogi is a grown-up version of Sutter Keeley from The Spectacular Now, a man who is crumbling under his own self-imposed need to be cool and aloof. Parvathy's Jaya, while seemingly shrill, prim and proper, is the foil he needs to keep the copious amounts of noise he spurts out in check.

While the mature characterization and the welcoming presence of its two leads help the movie in leaps and bounds, its reluctance to subvert genre clichés leaves it hobbled. It's like the writer checked off from a list - "a scene of drunken misbehaviour", "a 2-minute scene of needless emotional outburst", "a clunky resolution that feels forced" etc. - in order to meet the quota of road trip tropes. It lacks the irreverent self-referential humorous tone a film like Pa Paandi has about its characters and story.

You have to learn to laugh at yourself while you laugh at each other, kid.

Any amount of praise heaped on Irrfan Khan and Parvathy would be inadequate. They offset the convenient writing with stellar chemistry and subtle physical acting. Watching people so assured in their roles is a welcome reprieve from the wannabes who think being loud and brash is the highway to mainstream acceptance.

The soundtrack is highly complementing. The songs might not make their way to the top 10 lists, but they bring a non-distracting background to a relationship that is way past the days of club-hopping.

The only dents in the film's technical finesse would be the extremely poor visual effects accompanying the many driving scenes. And that is an accurate microcosm of the film on a whole - it is pleasant, fun, funny and relatable, but has glaring errors in judgement from time to time that smack your sensory organs. But when the actors are so effortlessly good and the direction is so unabashedly assured, slight flaws in storytelling can be gladly forgiven.
Share. Save. Connect.
Tweet
QARIB QARIB SINGLLE SNAPSHOT 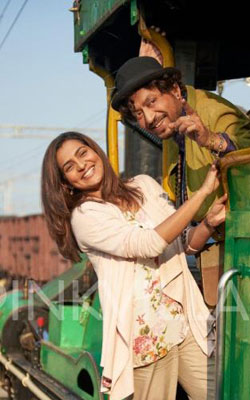 ADVERTISEMENT
This page was tagged for
Qarib Qarib Singlle hindi movie
Qarib Qarib Singlle reviews
release date
Irrfan Khan, Parvathy Thiruvoth Kottuvatta
theatres list
Follow @fullhyderabad
Follow fullhyd.com on
About Hyderabad
The Hyderabad Community
Improve fullhyd.com
More
Our Other Local Guides
Our other sites
© Copyright 1999-2009 LRR Technologies (Hyderabad), Pvt Ltd. All rights reserved. fullhyd, fullhyderabad, Welcome To The Neighbourhood are trademarks of LRR Technologies (Hyderabad) Pvt Ltd. The textual, graphic, audio and audiovisual material in this site is protected by copyright law. You may not copy, distribute, or use this material except as necessary for your personal, non-commercial use. Any trademarks are the properties of their respective owners. More on Hyderabad, India. Jobs in Hyderabad.