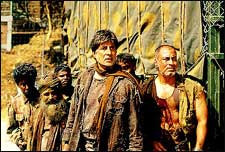 Mithun Verma / fullhyd.com
EDITOR RATING
6.0
Performances
Script
Music/Soundtrack
Visuals
NA
NA
NA
NA
Suggestions
Can watch again
NA
Good for kids
NA
Good for dates
NA
Wait to rent it
NA
Due to the acute shortage of bright ideas for an introduction, this movie will have no introduction. Instead, we'll have a line saying that it has no introduction. Those who don't want to read that line have no option, as it's the first line of the review. However, you have the option of getting to the next paragraph, below.

'Mere badan se khaal utaar sakte ho, par mere dil se himmat kaise utaaroge?' (You can peel the skin off my body, but how will you peel the courage off my heart?) It is such soul stirring lines that make-up Deewar. Ironically, Amrita Rao doesn't look soul stirring at all. But she is. No matter how many people hated her in Main Hoon Na, she will still shed weight (khaal utaarna), and will act in many more movies (dil mein himmat).

Tsk tsk. Thankfully, the movie is not about her. Deewar is about Big B and other men that have been living hell in Paki prisons since the war of 1971. The Indian Army cannot do anything about them since Pakistan denies their presence. These prisoners of war have lived there for over 3 decades - some of them waiting to die, some already dead, but most, waiting for freedom.

Major Ranvir Kaul (Amitabh) is the man who still instigates hope in them. This he does by getting flogged, mouthing patriotic dialogues and getting his fellow prisoners killed in the prison-breaks he organizes.

That's not his fault. How else will the movie establish the fact that these prisoners will get killed for the freedom of the others? How else will the producer reduce the working hours of the character artists? Kill, kill, kill. Call it sacrifice.

After many such sacrifices Gaurav (Akshaye Khanna) enters Pakistan to rescue his dad, Major Ranvir Kaul, from the hellish prison. With the help of a few corrupt ISI agents and Khan (Sanjay Dutt), he manages to pull off the impossible.

If you haven't ended up in a coma because of the pace, the movie gets better after Sanjay Dutt's introduction. As Khan, he's breathed life into this otherwise boring adventure with his brash talking and coy street style.

Amitabh and Akshaye Khanna have given polished performances. Their union gets overwhelmed by the ecstacy of men tasting freedom after three decades.

But there's one insight that the movie provides. Whenever a man dies, the prisoners of war sing songs. And they blame the Pakis for killing them. The last thing anybody wants to see is a bunch of old guys singing and dancing like baboons on LSD. Don't blame the Paki's for torturing these guys.

Seriously, the movie could've done without the songs. And it could've definitely done without Amrita Rao. The lack of pace and the blistered clichés mar the movie dead. A novel story, Amitabh and Sanjay make it fun. All you have to do to watch this movie is to flip a coin and decide.
Share. Save. Connect.
Tweet
DEEWAR SNAPSHOT

RATING
10
Rahul on 18th Jul 2004, 7:09am | Permalink
Easily beats watching pure filth like Vasantham. However, if you liked Vasantham maybe this is NOT a movie for you...
RATING
8
The Rainmaker on 29th Jun 2004, 1:10pm | Permalink
Great review!! It really is a flip-a-coin decision :D
RATING
4
Didhegetcha on 27th Jun 2004, 7:12pm | Permalink
Nice review Mr. Mithun. I am especially impressed with your ability to translate... transcending boundaries of the real and implied :D

ADVERTISEMENT
This page was tagged for
deewar 2004 full movie download
Deewar hindi movie
Deewar reviews
release date
Amitabh Bachchan, Akshay Kumar
Follow @fullhyderabad
Follow fullhyd.com on
About Hyderabad
The Hyderabad Community
Improve fullhyd.com
More
Our Other Local Guides
Our other sites
© Copyright 1999-2009 LRR Technologies (Hyderabad), Pvt Ltd. All rights reserved. fullhyd, fullhyderabad, Welcome To The Neighbourhood are trademarks of LRR Technologies (Hyderabad) Pvt Ltd. The textual, graphic, audio and audiovisual material in this site is protected by copyright law. You may not copy, distribute, or use this material except as necessary for your personal, non-commercial use. Any trademarks are the properties of their respective owners. More on Hyderabad, India. Jobs in Hyderabad.