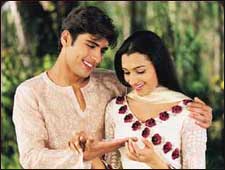 Deepa Menon / fullhyd.com
EDITOR RATING
1.0
Performances
Script
Music/Soundtrack
Visuals
NA
NA
NA
NA
Suggestions
Can watch again
NA
Good for kids
NA
Good for dates
NA
Wait to rent it
NA
Sometimes it's reassuring to find your worst suspicions of a movie confirmed. Even if it means sitting through three hours of drivel, you feel vindicated somehow that this movie did not pull even one surprise on you. It went along obligingly and did exactly what was expected of it - stank to the heavens.

Curious to find out what potential blockbuster the Rajshri family has brought to the screens this time, some people took the trouble of booking tickets to this movie, first day, first show. The show was booked out at the multiplex for three days solid. Ah, the poor suckers. But you have to wonder what gave them the idea that this was going to be a good film - was it the cheesy trailers, the promising faces of the lead pair, or that fascinating title? The movie itself is, of course, all that and more.

Pari (Pooja Kanwal) is a sweet, simple girl who smiles an awful lot. Maybe it's gas. She goes through life with the strong belief that one must be good, kind, and loving to everyone, even an older brother who, judging from his expression, has a perpetually sore bum. Her father and sister-in-law, however, are really nice people and wholly support Pari's decision to study in a hostel at Shimla. So off they go, sore bum and all, to see her on her way. The picture of a happy family.

Once there Pari makes friends with everyone, except the one person she really wants to win over - Yash (Sammir Dattani), the dance-master. Now Yash is also a sweet, simple boy, although he doesn't smile as much as Pari. He has other expressions too, and they change in slow motion so you can see him go from Angry to Sad to Happy, without missing a tic.

Yash also has a friend, Anna, who screeches when provoked. Unfortunately, she's provoked a lot. Mostly by Aziz, a rich, leather-clad jerk with a couple of buxom cronies, who wants to marry Pari for her money (we admit, that's the only sane reason). Despite his evil schemes, Pari and Yash fall in love.

Yash teaches Pari to dance, and soon they're winning competitions, wearing the most hilarious costumes and singing excruciating songs. There seems to be a problem with the sound of this film, the songs are extra-loud and the dialogues, especially during the climax, are spoken in whispers. Soft enough for you to hear the laughter in the hall.

Returning to the plot (yes, we must). Aziz sees that there's no way he's going to win Pari over, so he does the next best thing and gets her friend pregnant. Anna decides all this acting is too much for her, so she faints, has a miscarriage and then conveniently slips into a coma.

Meanwhile, Pari's brother (sore bum) is shown some photographs of Yash and Anna in bed. It is actually, of course, Aziz in bed with her, but he manages to Photoshop the pictures and superimposes Yash's face on his body. Now everybody is angry, except for Pari, who stands by her man. Because deep down in her heart, she knows he could never do this to her. And that he doesn't have so much chest hair.

So while the entire community is taking a good look at the pictures (just to study evidence, you understand), Pari tries to prove that Yash is innocent. And thanks ultimately to her sneaky sister-in-law, the truth is out and all problems under the sun are solved.

Yash can go on teaching dance, Pari can return the vacant smile to her face, and everybody can circle the couple and sing songs in joy. Except for the people who stood in a queue to buy tickets to this one. Seriously, what were you thinking?
Share. Save. Connect.
Tweet
UUF KYA JADOOO MOHABBAT... SNAPSHOT
UUF KYA JADOOO MOHABBAT HAI SNAPSHOT

ADVERTISEMENT
This page was tagged for
mohabbat ka jadooo
Uuf Kya Jadooo Mohabbat Hai hindi movie
Uuf Kya Jadooo Mohabbat Hai reviews
release date
Sammir Dattani, Pooja Kanwal
Follow @fullhyderabad
Follow fullhyd.com on
About Hyderabad
The Hyderabad Community
Improve fullhyd.com
More
Our Other Local Guides
Our other sites
© Copyright 1999-2009 LRR Technologies (Hyderabad), Pvt Ltd. All rights reserved. fullhyd, fullhyderabad, Welcome To The Neighbourhood are trademarks of LRR Technologies (Hyderabad) Pvt Ltd. The textual, graphic, audio and audiovisual material in this site is protected by copyright law. You may not copy, distribute, or use this material except as necessary for your personal, non-commercial use. Any trademarks are the properties of their respective owners. More on Hyderabad, India. Jobs in Hyderabad.