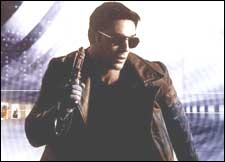 Deepa Menon / fullhyd.com
EDITOR RATING
1.0
Performances
Script
Music/Soundtrack
Visuals
NA
NA
NA
NA
Suggestions
Can watch again
NA
Good for kids
NA
Good for dates
NA
Wait to rent it
NA
We at fullhyd.com take some pride in the fact that we've seen the worst movies of our time. It's not so easy to bore us out of our minds; we're halfway there anyway. But Asambhav ups the threshold so effortlessly (for them), that we're humbled.

What can we say about a movie like this? It leaves us speechless (as you can see). All the jokes have already been made, all these familiar clichés have been numbered and catalogued, and all the bad-acting cracks have been well, cracked. So we won't judge (snort), we'll just let the plot speak for itself.

Aadit Arya (Arjun Rampal) is an officer of the Indian Army, who makes all major decisions of national security himself and then informs the government on what to do. Everybody is happy with this state of affairs as it gets rid of unnecessary bureaucratic hassle ...and saves the scriptwriter undue trouble. The poor guy has enough on his mind all ready. Crap doesn't churn itself out, my friend.

So what happens is that the President of the nation is kidnapped by a bunch of badly dressed terrorists. Of the two crimes, the one against fashion hurts the most. The President - who tries his best to look like Vajpayee, for some reason - also has a daughter, and she is held hostage by a man in a red bow-tie, who spends half the film pointing, what to our trained eye looks like, a Very Big Gun at her, and grinning madly.

He's not the only deranged soul. And you get the feeling he didn't start out that way. But then Asambhav makes a lot of people do a lot of horrible things. No careers were spared during the making of this film.

Naseeruddin Shah, for instance, struts about in silk shirts and sports a firang woman on each arm. He plays Sam Hans, an evil millionaire who smuggles drugs, shoots people and whores his acting talent.

Sam Hans runs a nightclub in Switzerland where he occasionally organizes a 'Bharathiya Natya Samaroh' featuring Indian girls falling out of their dresses. Priyanka Chopra plays one such sensitive artiste (imaginatively named Alisha), who is being used by Hans to bring drugs into the country. But Alisha is quick on the uptake, and only waits until 40 alarm bells have bitten her in the butt and her friend gets strangled dead to realize that all is not right with this assignment.

Alisha goes to Aadit for help, but he's already on the case as we can tell by his calm, self-assured stoned manner. Then a whole lot of other stuff happens, involving Pakistan's ISI, some random terrorist group, the Indian Embassy in Locarno, and the Indian President, who, despite being kidnapped, makes the time to give interviews to indiatimes.com (very subtle product placement, we thought). At this point the plot gets so caught up in itself, you want to get out of there and give it some privacy.

A word about the other performances. Anupama Verma and Shawar Ali play the kidnappers, and you're so happy when they get their guts splattered at the end of the movie, you wish you had some of that confetti. Then we have a couple from the Embassy, the old boss and the nymphet PR officer, who do a little tongue-wrestle at the end of the film that will scare the remaining life out of you.

By the end of Asambhav, the Exit sign starts to look like the light at the end of the tunnel. But you have a long time before you get there. Just take a deep breath, keep your head between your knees, and wait for it to pass.
Share. Save. Connect.
Tweet
ASAMBHAV SNAPSHOT

ADVERTISEMENT
This page was tagged for
Asambhav hindi movie
Asambhav reviews
release date
Arjun Rampal, Priyanka Chopra
theatres list
Follow @fullhyderabad
Follow fullhyd.com on
About Hyderabad
The Hyderabad Community
Improve fullhyd.com
More
Our Other Local Guides
Our other sites
© Copyright 1999-2009 LRR Technologies (Hyderabad), Pvt Ltd. All rights reserved. fullhyd, fullhyderabad, Welcome To The Neighbourhood are trademarks of LRR Technologies (Hyderabad) Pvt Ltd. The textual, graphic, audio and audiovisual material in this site is protected by copyright law. You may not copy, distribute, or use this material except as necessary for your personal, non-commercial use. Any trademarks are the properties of their respective owners. More on Hyderabad, India. Jobs in Hyderabad.