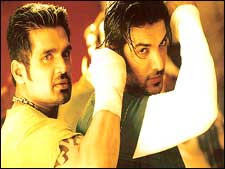 On the topic of imitating Salman, another chap that has near perfected this dubious art is pretty-boy-runt John Abraham. The last time anyone saw him without baring his chest was in the dark ages. Even then he never had a shirt on. It was just too dark for anybody to see.

Now the story revolves around both of these Salman wannnabes. They both have some mighty undeniable similarities. They both study at the same college. They both love singing the same song. They both even love the same girl, Sonia (Nauheed Cyrusi). They both have angry, muscle-flexing angry big brothers - Sohail has Salman, and John has Sunil. In fact, they both share the same clothes as well. But it's Sohail who wears all of them, and John just struts along half-naked.

It so happens that when Sohail comes to know that even John is wooing the same girl as he is, he politely threatens John to stay away from her. But Sohail's friend (Apoorva Agnihotri - Jassi's boss) pushes John around in the college.

John bears with everything because he knows that Sohail is the brother of the city's biggest don - Sunny Deol. But still he is hurt for being humiliated in public by Sohail's friend. So John goes to his room and vents out his anger on all the glass objects there. How can a 2nd grade actor insult him? More importantly, how dare Apoorva have better expressions than he does?

So when Sunil Shetty finds John in a completely dilapidated state, he's thoroughly cheesed-off. Sunil sets off to teach the guy who's responsible a lesson or two in macho action. But unfortunately he beats up Sohail instead of his friend, and nearly to death.

When Sunny pa hears about it, he's not really flattered. Just about a reel back he had killed a couple of guys for plotting to kill his brother. Now he has to deal with a guy who again has tried to kill his brother. God, if all the world ever wants is his brother to die, why the hell doesn't he? Anyway, as a responsible senior actor, he sets aside his angst and starts the search for Sunil.

Sunil, meanwhile, realizes his mistake. But he's ready to face the consequences. At this point the colony members intervene saying they don't want anyone from their colony being hurt by Sunny. They also believe since Sunny is their benefactor he would listen to their pleas of not hurting Sunil.

And he does listen to them by sparing Sunil. But before that he makes them listen to a lot of high decibel emotional talk. Ultimately Sunny's henchmen burn down the colony without his permission. Why? Ask after the next para.

Sohail in the meantime gets Sonia into a lonely chapel and proposes his love to her. She refuses saying that she loves John. John Abraham, not the John in your house. Unless, of course, you happen to live in John Abraham's house. Anyway, Sonia's rejection turns Sohail into a maniac.

He holds her a hostage and tries to do something with a gun. What, we don't know, but it looks really messy. He even beats up John who tries to shove his bare-chested self into Sohail. So for the sake of two lives (John and Sonia), Sunny Deol shoots his own brother down. That ends the movie.

Sunil has absolutely no role to play in the film. Sunny just does what he does - produce sounds loud enough to be picked by remote satellites. John just lies around half-naked. Sohail has the best role in this mess. He handles the transformation of a loving brother into a maniacal lover with utter imbalance. Good because maniacs are unbalanced.

Rahman has given some decent music, and there is some slick editing job in parts. On the whole, however, Lakeer (a totally unrelated title) is best watched in a theater. With you not inside it.
Share. Save. Connect.
Tweet
LAKEER SNAPSHOT

ADVERTISEMENT
This page was tagged for
lakeer movie
Lakeer hindi movie
Lakeer reviews
release date
Sunny Deol, Sunil Shetty
Follow @fullhyderabad
Follow fullhyd.com on
About Hyderabad
The Hyderabad Community
Improve fullhyd.com
More
Our Other Local Guides
Our other sites
© Copyright 1999-2009 LRR Technologies (Hyderabad), Pvt Ltd. All rights reserved. fullhyd, fullhyderabad, Welcome To The Neighbourhood are trademarks of LRR Technologies (Hyderabad) Pvt Ltd. The textual, graphic, audio and audiovisual material in this site is protected by copyright law. You may not copy, distribute, or use this material except as necessary for your personal, non-commercial use. Any trademarks are the properties of their respective owners. More on Hyderabad, India. Jobs in Hyderabad.