What the rest of the audience thought of the film is summarized in some unflattering, unmentionable and probably painful ideas involving Shambhu and a bamboo. Shambhu is like a wide variety of leftovers from other movies being put through a dishwasher, hoping to produce something multi-flavored but churning out something unpalatable.

Shambhu (Aryan) and his friends have fathers who are hell bent on their sons enjoying their 'teenagi time'. They encourage them to drink, smoke and gallivant, and the fathers even defend their philosophy to the complaining college principal. The boys make their way to the Sanghi Temple one day and discover Sarika. Turns out Shambhu and Sarika have already met, and the boy's dil dhadke only for her, and like one Mr. Lionel Richie said, he wants to tell her so much "I laauu you".

When he manages to get his mind's machinations across to her, she says she wants to be friends. So with a heavy heart and raging hormones, he settles for it. But when some bad boys finger her in the bus, our boy wants to bash some baddie butt. So he goes to the local dada and gets the job done. This becomes a gang war, and caught in the middle, Sarika says "uhuhun... waaahhhh... boo hoo..." Shambhu becomes the proud recipient of one tight TISHHH, and she says hit the road Jack, and don't you come back no more.

At this stage, you're thinking your money might have been better spent towards buying a shirt for Salman Khan, 'cos the movie sucks! The story is non-existent and you're not even slightly curious about what happens next. You, therefore, might leave now and save yourself further agony, but we, the reviewers, must fight on. Sighhhh...

Shambhu's pop Chandramohan and other family members give our boy an unbelievably unbelievable sermon on fighting for love and some other crap. Now with some newfound muscles, Shambhu fights baddie Durga (the best actor of the lot, I thought) and after kicking his ass all over Divya Shakthi Apartments in Ameerpet, kills him. Then he calmly walks out of there, with no repercussions whatsoever! The cops want to take him into 'protective custody'! Whatever little hope I had for the movie was dead, buried and had little flowering plants growing on top within 2 minutes.

From here on, the story meanders. Well, let me rephrase that... the story continues to meander aimlessly - through rowdyism (oddanna, nannu champakanna...), student power (kaaleji lo rowdyism chestharra? Oraaiiii!!!) and politics (no comment). There is absolutely no point going into the details here. Rowdyism is finished, the CM is smiling, Shambhu becomes a major student leader, everybody loves him and life is all ha ha hee hee. The end.

Shambhu is severely crippled by the lack of sense, logic and credibility throughout. At times, you start wondering 'how did this happen?'. Like Sarika deciding she loves Shambhu in, like, no time - just after she says no, never, to him. Agreed, who understands women, and agreed, it has happened before and maybe even faster in some movies, but that still don't make it any more believable. The fathers encouraging their sons into degradation is ridiculous and just plain sad.

Aryan looks like he needs help carrying his bag to college, so though he looks okay in the action scenes, it's all a little difficult to believe. He also looks like he needs a scholarship to the Gillette Shaving School. Sarika is very cute, but simply being body beautiful should not sell a movie. She's in her debut, and she's already playing a prodigy of female brainlessness - wonder what her career graph is going to look like. She's there mainly for the songs, of course. 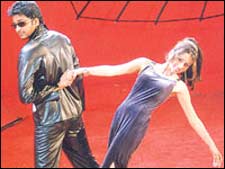 And the songs... oh... my... God! The bane of the movie. Senseless, unbelievably bad timing, and absolutely no relation to the story. The first two were okay and I was betting on Ilayaraja, but the rest seem straight out of the Headache Top Ten soundtrack. The director does show some skill, especially in handling large numbers of actors, but he's let down by the script. The camerawork is worth mentioning, though.

ADVERTISEMENT
This page was tagged for
Shambhu telugu movie
Shambhu reviews
release date
Aryan, Sarika
theatres list
Follow @fullhyderabad
Follow fullhyd.com on
About Hyderabad
The Hyderabad Community
Improve fullhyd.com
More
Our Other Local Guides
Our other sites
© Copyright 1999-2009 LRR Technologies (Hyderabad), Pvt Ltd. All rights reserved. fullhyd, fullhyderabad, Welcome To The Neighbourhood are trademarks of LRR Technologies (Hyderabad) Pvt Ltd. The textual, graphic, audio and audiovisual material in this site is protected by copyright law. You may not copy, distribute, or use this material except as necessary for your personal, non-commercial use. Any trademarks are the properties of their respective owners. More on Hyderabad, India. Jobs in Hyderabad.