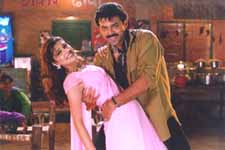 EDITOR RATING
7.5
Performances
Script
Music/Soundtrack
Visuals
NA
NA
NA
NA
Suggestions
Can watch again
NA
Good for kids
NA
Good for dates
NA
Wait for OTT
NA
Five thousand years after the calamity that swept Dwaraka into the sea, an emotionally-surcharged archaeologist, Balaram (Venkatesh), decides to find out the reason that a whirlpool churns the sea on the amayasa day of every month, causing the birds to be drawn into its fold. An atheist, Balaram thinks that only science can provide the answer and so he goes about his task with unwavering commitment.

Science may or may not be able to explain these happenings, but it definitely can perform miracles of its own. Deviputrudu stands out as a masterpiece in the area of visual effects. Kudos to the director Kodi Ramakrishna and the graphics and visual effects creator Elangovan for devising some out of the world graphics that are mesmerizing Telugu audiences like never before. The graphics here are nothing short of what you'd see in Hollywood films. The underwater photography is excellent, even though there are only a couple of shots. And the whirlpool and the birds being drawn into it are visual treats.

Apart from to hi-tech freaks, the film also appeals to the religiously-minded and those who like senti. Balaram falls in love with the God-fearing Karuna (Soundarya) who pleads with him that the calamity in the sea cannot be explained by science. With unremitting attention to his purpose and frustrated by the lack of initiative on the part of the government, he goes underwater and locates a huge metal box that is supposed to contain the key. And when he brings it the surface and opens it, he realizes that it is not an ordinary metal box but a storehouse of a mysterious force that would destroy the world if not put back in its place. But the baddies, who want to have power over the universe, will not allow him. Unfortunately, they know the place where it is hidden.

How the second Venkatesh (Surya), a conman, is made to come to Dwaraka through the miraculous powers of a baby (Baby Cherry) and how he successfully puts the box in its original place forms the remaining part of the story.

Venkatesh dons his role with consummate ease, whether as the archaeologist or as the conman out to snatch the so-called diamond from Anjala Jhaveri. The songs are okay and the film has lot of emotional content that will go down well with the audiences of all hues. But what stands out, as we've already said, is the sfx. You'll be proud it's our folks that did it!
Share. Save. Connect.
Tweet
DEVI PUTRUDU SNAPSHOT

ADVERTISEMENT
This page was tagged for
devi putrudu chirukulo anchulo nedhara pothuna dwaraka
devi putrudu movie review in telugu
devi putrudu video songs
Devi Putrudu telugu movie
Devi Putrudu reviews
Follow @fullhyderabad
Follow fullhyd.com on
About Hyderabad
The Hyderabad Community
Improve fullhyd.com
More
Our Other Local Guides
Our other sites
© Copyright 1999-2009 LRR Technologies (Hyderabad), Pvt Ltd. All rights reserved. fullhyd, fullhyderabad, Welcome To The Neighbourhood are trademarks of LRR Technologies (Hyderabad) Pvt Ltd. The textual, graphic, audio and audiovisual material in this site is protected by copyright law. You may not copy, distribute, or use this material except as necessary for your personal, non-commercial use. Any trademarks are the properties of their respective owners. More on Hyderabad, India. Jobs in Hyderabad.