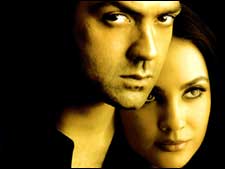 Bardaasht is prolific in panache. The sole reason for this is a killer Bobby Deol. Pun intended. Another thing going for Bardaasht is a snappy script. Yes, we undoubtedly miss the inane musical dilemmas and the ridiculously lengthened sappy scenes, but then we manage to make our peace with this non-existence. They've hacked down most of the unnecessary bits. Pity, they didn't get to some of the cast.

Bardaasht is your regular good guy, bad cop movie. Aditya (Bobby Deol) is a court-marshalled army man, who was thrown out because he stood up for his beliefs. Now, he runs a travel agency, and the life of his younger brother Anuj (Ritesh Deshmukh).

Anuj is a regular teenager, at least as regular as his 15 minutes in the movie will let him be. He is given into smoking, drinking, cheating, stealing and uncontrollable asthma attacks. Out of the kindness of your heart, you find yourself fervently praying that the next one may be the last attack.

Anuj tinkers around with fate more often than once, despite repeated warnings from his father figure brother Aditya. He keeps landing himself waist-deep in debris, and as the movie progresses, the level does, too. Eventually he is bumped off in an 'apparent' police encounter, with a drug racket planted to his name.

Aditya cannot tolerate this injustice. He has to prove his dead brother's innocence and clear the stigma attached. But to do this he has to fight the evil forces of injustice. No, no, the movie does not have Mallika Sherawat. Our man has to fight the corrupt system. Yes. Another one of those.

Now comes the part where the estrogen is introduced. In walks Aditya's ex-flame Payal (Lara Dutta). Now this lady goes through all the way with a dignified sobriety. So dignified it is, you wonder what her role actually is.

Her entry is also the one time in the film that Bobby Deol comes very close to having any kind of expression on his face. Close, but not quite there. Payal is a lawyer and helps Aditya through the case that he fights on the perpetrators of crime.

The people referred to above are 3 skankwads who will stop at almost nothing to prove that they are the bad guys. The court decides in their favor, and an enraged Deol takes the law in his hands. But don't go confusing enraged with any kind of emotion. Aditya's visage bears the same half-eyebrow-scrunched, half-troubled look as always.

Another good thing about Bardaasht is that it doesn't belittle its audience with the 'Me-Tarzan-you-Jane' syndrome. The acting is nearly there. What brings this movie up to mark is, surprisingly, Bobby Deol's style. The script is short with no added salt 'n' pepper, and we are spared the agony of sitting through endless songs. Definitely unexpected.

The movie starts and ends on a serious note. Lara Dutta's performance stands out like a diamond in the coal mine. The music doesn't, though. Some of the action sequences are brilliant and very Hollywood like. Bardaasht delivers halfway, the rest is left to you.
Share. Save. Connect.
Tweet
BARDAASHT SNAPSHOT

ADVERTISEMENT
This page was tagged for
Bardaasht hindi movie
Bardaasht reviews
release date
Bobby Deol, Lara Dutta
theatres list
Follow @fullhyderabad
Follow fullhyd.com on
About Hyderabad
The Hyderabad Community
Improve fullhyd.com
More
Our Other Local Guides
Our other sites
© Copyright 1999-2009 LRR Technologies (Hyderabad), Pvt Ltd. All rights reserved. fullhyd, fullhyderabad, Welcome To The Neighbourhood are trademarks of LRR Technologies (Hyderabad) Pvt Ltd. The textual, graphic, audio and audiovisual material in this site is protected by copyright law. You may not copy, distribute, or use this material except as necessary for your personal, non-commercial use. Any trademarks are the properties of their respective owners. More on Hyderabad, India. Jobs in Hyderabad.