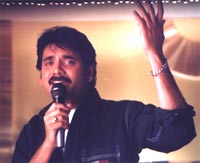 EDITOR RATING
7.0
Performances
Script
Music/Soundtrack
Visuals
NA
NA
NA
NA
Suggestions
Can watch again
NA
Good for kids
NA
Good for dates
NA
Wait to rent it
NA
Once in a while you feel like going to a theater to watch a good film. Wary as you are about the kind of films that are flooding the market, you keep wondering if it is worth taking the risk. Just in time a friend drops in and tells us that you have to watch this particular film; in this case Nuvvu Vastaavani. Trusting our friend for once, you reluctantly go to see the film. And as the first few reels of the film unwind, bingo, you begin to talk animatedly to yourself, "What a film!"

Nuvvu Vastaavani (on which Nagarjuna is pinning his hopes after the disastrous bombing of most of his films, since Annamayya) is not a triumph just for the audiences, but also for the producer and the distributors, who have been wading in troubled waters, unable to grasp the likes of the audiences.

It has a wafer-thin storyline. Chinni, a cable operator in this instance, wants to desperately establish himself as a good singer. He keeps singing in the neighbourhood with the youth, displaying his dancing prowess alongside, just in case some famous musician or film director might pass along and offer him a chance.

On her arrival in the colony, Indira (or Indu for short) happens to listen and develop an instant liking for the guy's song. Unfortunately, she doesn't know how the guy looks... till the end. Meanwhile, Indu meets a guy called Krishna who, whenever she encounters him, is bashing up someone or the other. In a series of encounters with Krishna she confirms that he is the local toughie and develops an aversion for him. She even loses her eyesight because of him.

Taken care of by Chinni, whom she meets at a marriage function, she regains her eyesight only to find out that he has disappeared by a fortuitous turn of events. Where does he disappear and why? For that you have to wait for seven years to know.

If one were to go by the narrative it would sound like a funny film. But Nuvvu Vastaavani is a simple story, albeit with complex twists and turns, but told in the simplest possible terms. The film progresses with consummate ease from one scene to another, reaching its logical conclusion - the boy meets the girl and they live together happily ever after.

There is nothing new to boast about in the story. The performances are mediocre (though Simran looks fabulous), the choreography doesn't match the soft songs that really soothe your ears, the comedy is nothing to rave about, and Nagarjuna doesn't have anything new to offer. But what makes the film different is the phenomenal screenplay which, like a magic wand, turns an ordinary film into an extraordinary one.

If you really want to spend some time away from the hustle and bustle of life, this is just the film, and you will not come back disappointed.
Share. Save. Connect.
Tweet
NUVVU VASTAVANI SNAPSHOT

ADVERTISEMENT
This page was tagged for
nuvvu vashthavani movi mp3 songs
nuvvu vastavani hd movie
nuva.vastavane.telugu.songs
nuvvu vastavani full movie download
no vastavani telugu mp3
Follow @fullhyderabad
Follow fullhyd.com on
About Hyderabad
The Hyderabad Community
Improve fullhyd.com
More
Our Other Local Guides
Our other sites
© Copyright 1999-2009 LRR Technologies (Hyderabad), Pvt Ltd. All rights reserved. fullhyd, fullhyderabad, Welcome To The Neighbourhood are trademarks of LRR Technologies (Hyderabad) Pvt Ltd. The textual, graphic, audio and audiovisual material in this site is protected by copyright law. You may not copy, distribute, or use this material except as necessary for your personal, non-commercial use. Any trademarks are the properties of their respective owners. More on Hyderabad, India. Jobs in Hyderabad.