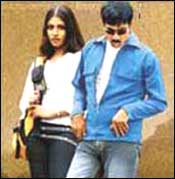 Mithun Verma / fullhyd.com
EDITOR RATING
1.0
Performances
Script
Music/Soundtrack
Visuals
NA
NA
NA
NA
Suggestions
Can watch again
NA
Good for kids
NA
Good for dates
NA
Wait for OTT
NA
Sometimes, things are so hopeless, you feel like giving up. Instead of that, there are others who take an easier way of ignoring them. Here's the review of this piece of stultyfying rubbish, ignoring it.

As the titles rolled on with the song 'Waiting For Tonight' by Jlo, the priest (vermilion, sacred-thread and all) sitting next to me looked really upset. 'Upset that they're playing an English song in a Telugu movie,' I asked. 'No, my son,' he replied. 'Upset they're not showing miss Jlo in her bathing suit!'

That's when I shut my trap shut, sank into my seat and saw that there were these strange creatures doing strange things on the screen. I refused to even try to believe this was a part of a feature film - the same medium, which till today, was supposed to have human beings. That's when they stopped the animal documentary and started the film. 10 minutes and I was where I started. There were some strange creatures on the screen...

The priest leaned over and said, 'Though I got paid by the hero, it is difficult for me to understand, just who among those clods on the screen is the hero?' 'That one there, in the silver shirt, good looks, great height and cool expression,' I pointed out. To that the priest looked solemn and said, 'Let us pray!'

As I opened my eyes from the prayer, I noticed that the priest had fled, and was now replaced by this salesman (tie, briefcase and all). 'Do you know I got a seat with the ticket for free? Free! Free!' he yelled, excitedly. By that time the hero and the heroine had already sang a few songs.

Enter the vamp, the heroine's mom. 'She's evil,' explained the salesman. 'But she's a very peaceful woman. Will calm you down in your own home. Noiseless and odorless. Very cheap!'

Cheap. That I noticed. Everywhere. 'And the heroine, do you know about her?' inquired the salesman. 'She loves make-up. She actually applies lipstick on her forehead to makeup her mind! And, she's easily replaceable by any other product in the market. Like an hour-glass or something.'

'And the hero...' 'I'll tell you about him,' I snapped. 'He's also completely replaceable. Like by the dark night or something.' But by then, even the salesmen had fled. That's when I realized that the hero was actually a greeting-card merchant in the movie, and the way he sold them, this poor guy couldn't bear.

The only guy who has to bear with everything was I. This is the only movie I know where both the hero and the heroine had 12 different expressions for blinking. A boy-meets-girl-parents-disagree-they-rebel-and-parents-agree-in-the-end movie was never made this professionally. If you sent it to the bad-movies club, they'd say sorry, no professionals here.

With the kind of movie this is, I can imagine how the making was like:

Director: C'mon now, hero. In this scene, you're smashed badly by the thugs. Squeal like a pig in agony.
Hero: Moo! Moo!
Director: Damn it! What is wrong with you? Heroine, show him how it's done!
Director: No! No! Not that! Don't take your clothes off! I meant squealing like a pig in agony!
Heroine: Meow! Meow!
Director: Looks like I have to do everything. Here, bow! Bow!

And bow bow, meow meow, moo moo it is!

ADVERTISEMENT
This page was tagged for
abbayi premalo paddadu naa songs
abbai premalo paddadu movie naa songs
Abbai Premalo Paddadu telugu movie
Abbai Premalo Paddadu reviews
release date
Follow @fullhyderabad
Follow fullhyd.com on
About Hyderabad
The Hyderabad Community
Improve fullhyd.com
More
Our Other Local Guides
Our other sites
© Copyright 1999-2009 LRR Technologies (Hyderabad), Pvt Ltd. All rights reserved. fullhyd, fullhyderabad, Welcome To The Neighbourhood are trademarks of LRR Technologies (Hyderabad) Pvt Ltd. The textual, graphic, audio and audiovisual material in this site is protected by copyright law. You may not copy, distribute, or use this material except as necessary for your personal, non-commercial use. Any trademarks are the properties of their respective owners. More on Hyderabad, India. Jobs in Hyderabad.