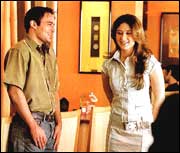 Deepa Menon / fullhyd.com
EDITOR RATING
5.0
Performances
Script
Music/Soundtrack
Visuals
NA
NA
NA
NA
Suggestions
Can watch again
NA
Good for kids
NA
Good for dates
NA
Wait for OTT
NA
Comedy is serious business, said Jerry Lewis before he did his famous back flip and landed on a much-worn ass. And it is too. It helps if you have the right lines, the right actors and just the right measure of insanity (two large scoops, hold the dribble). It helps if the audience is ready and willing to bust a gut. It helps if you've set a happy precedent. But more than anything else it helps at the end of a long-winded joke, to remember the friggin' punchline.

By the second half of the film Hulchul has no clue what it was trying to accomplish. It starts off with the noblest of intentions, the promise of explosive funniness and then it gets really caught up in a family drama that you don't give a flying fig about. It goes from toilet humor to melodrama in the courtyard. From Ganpath Rai to Hamare kul ki maryadha. From Arshad Warsi in shorts to Arbaaz Khan in a see-through dhoti. Why are you here, again?

So, like this: There are two feuding families, each with large quantities of children. The first family lives in Angaarchand's Bachelor Pad With Attached Cattle-Shed. Angaarchand (Amrish Puri) is a man of a few words, all of which are spoken at vein-bursting decibels levels and accompanied with flying spit. He hates all women and insists that his four sons remain unwed. Two remain true to their father's wishes, one falls in love and one endorses his views on celibacy by getting married and having two children.

The other family is run by a shrill, scheming matriarch, Lakshmidevi (Lakshmi), who has two main passions: she wants Angaarchand's head on a plate, and she wants this plate placed on the railway tracks. In all other respects, she's a sweet old lady.

Due to the highly jobless nature of the two clans, neither has any peace of mind. So when Laksmidevi's granddaughter, Anjali's (Kareena Kapoor's) wedding is called off thanks to the famous feud, she decides to get revenge from Angaarchand's youngest son, Jai (Akshaye Khanna).

Much to nobody's surprise, the two fall in love helped along with dangerous advice from Akshaye's friend, Lucky (Arshad Warsi). The only hilarious portions of the film are delivered by Warsi, who more than lives up to high post-Munnabhai expectations. Thanks to him, Akshaye Khanna, and Paresh Rawal to some extent, the first half is enjoyable and really funny in bits.

Hulchul does have some excellent lines, just thrown around and discovered with delight by the audience. But the movie really loses focus when the drama takes over. Suddenly the plot goes and gets serious on you, which it has no business doing. Soon there's just a lot of men tearing about looking furious and yelling threats at each other. Yawn. During the climax there's a really tedious attempt at returning to the comedy using some old gags and older lines. Yawner. Then hearts change miraculously for the better and love prevails. Yawnest.

ADVERTISEMENT
This page was tagged for
Hulchul hindi movie
Hulchul reviews
release date
Akshaye Khanna, Kareera Kapoor
theatres list
Follow @fullhyderabad
Follow fullhyd.com on
About Hyderabad
The Hyderabad Community
Improve fullhyd.com
More
Our Other Local Guides
Our other sites
© Copyright 1999-2009 LRR Technologies (Hyderabad), Pvt Ltd. All rights reserved. fullhyd, fullhyderabad, Welcome To The Neighbourhood are trademarks of LRR Technologies (Hyderabad) Pvt Ltd. The textual, graphic, audio and audiovisual material in this site is protected by copyright law. You may not copy, distribute, or use this material except as necessary for your personal, non-commercial use. Any trademarks are the properties of their respective owners. More on Hyderabad, India. Jobs in Hyderabad.