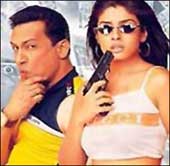 Deepa Menon / fullhyd.com
EDITOR RATING
1.0
Performances
Script
Music/Soundtrack
Visuals
NA
NA
NA
NA
Suggestions
Can watch again
NA
Good for kids
NA
Good for dates
NA
Wait for OTT
NA
Ever had this happen to you? A dear old friend you haven't met in a long time and whom you remember as having a wicked sense of humor is in town. You set off to meet him, excited at the prospect of reliving old times and, most of all, laughing over the hilarious jokes only he can come up with.

You get there and the first thing that strikes you is that your usually spiffy friend looks kinda dowdy and well, like a slob. But never mind, he's probably just having a bad day. He's still got that great big smile one his face, and his manners are still charming, but the jokes, oh god the jokes.

The plot is rabidly convoluted, but you can excuse that like you'd excuse an episode of Three's Company for being silly - it's almost a prerequisite. The characters and their circumstances are old-fashioned, drawn with an eye for the ridiculous rather than the cosmopolitan. There's no flashing of cleavage or navel, and no epithets more deadly than the Jumpin' Jehosophat kind. You might say this is a clean, wholesome film, but in reality it's as painful and as obscenely unamusing as a laugh track on a loop.

A filthy rich industrialist dies and leaves his Rs. 400-crore fortune to his gardener's son, Rahul (Suniel Huh? Shetty). Thanks to a strange misprint in the will, Rahul can only get his paws on the money once he's established himself as the mafia leader of Mumbai. His friend in need and general provider of sidekicks is his lawyer Anand, played by Shekar Suman, whose shirts are even louder than his jokes. Add to this gassy mixture, a bumbling cop Kanchan (Raveena Tandon), a secret service agent Tracy (Isha Koppikar), a greasy don Jindaal (Gulshan Grover), a stupefied nuclear scientist Krishnamurthy (Makrand Deshpande), and a Pakistani conspiracy of international disinterest.

The plot is dauntlessly obedient to Murphy's Law (the same one that made you buy tickets to this film), and every comic possibility in Clicheland is bled dry. Rahul and Kanchan join forces to catch Jindaal, who in turn gets in with the Pakistanis to kidnap Krishnamurthy, who in turn has two clones, one on each side of the border. Punches are thrown, songs are danced, and identities are mistaken. In the middle of all that shouting, running around and pulling of funny faces, there are a couple of solitary moments that will cause you to laugh. Then the inanity piles back on, strangling that smile, gagging that giggle and choking that chortle.

Do yourself a favor and stay at home. A pal's a pal, but a migraine is for life.

ADVERTISEMENT
This page was tagged for
Ek Se Badhkar Ek hindi movie
Ek Se Badhkar Ek reviews
release date
Raveena Tandon, Suniel Shetty
theatres list
Follow @fullhyderabad
Follow fullhyd.com on
About Hyderabad
The Hyderabad Community
Improve fullhyd.com
More
Our Other Local Guides
Our other sites
© Copyright 1999-2009 LRR Technologies (Hyderabad), Pvt Ltd. All rights reserved. fullhyd, fullhyderabad, Welcome To The Neighbourhood are trademarks of LRR Technologies (Hyderabad) Pvt Ltd. The textual, graphic, audio and audiovisual material in this site is protected by copyright law. You may not copy, distribute, or use this material except as necessary for your personal, non-commercial use. Any trademarks are the properties of their respective owners. More on Hyderabad, India. Jobs in Hyderabad.