The Sky Is Pink Review 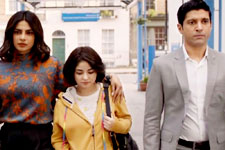 T J Reddy / fullhyd.com
EDITOR RATING
6.0
Performances
Script
Music/Soundtrack
Visuals
8.0
5.0
5.0
7.0
Suggestions
Can watch again
No
Good for kids
Yes
Good for dates
Yes
Wait for OTT
No
Aisha Chaudhary (Zaira Wasim) is the disembodied narrator of her biopic The Sky Is Pink. She prefaces her story by telling us that her story, like most others, concludes the same way - with the words "The End". We pay homage to Ms Chaudhary in our approach by narrating the story of Uccha Raju (Pee Raju) while reviewing the cinematic adaptation of hers.

In a broad sense, Uccha Raju's and Aisha Chaudhary's lives have the same plot. Raju and Aisha were born into turmoil. They had to endure a constant struggle to keep themselves alive. And both died prematurely based on their circumstances. Aisha Chaudhary was born with SCID (Severe Combined Immune Deficiency), and Raju was born into a local gangster's family.

Aisha's parents Niren (a restrained Farhan Akthar) and Aditi (a magnificent Priyanka Chopra Jonas) aren't very fortunate. They scrape together every paisa they have and take their newborn to London to keep her alive. The good people of London help this family out the best they can and afford Aisha 18 more years on this blue and green rock that orbits the sun. The remainder of the film chronicles those 18 years.

Raju's parents had passed on to the next realm when he was very young. A 5-year-old Raju was witness to his parents' murder at the hands of a rival gang. His uncle adopted him and vowed revenge on the men that handed such a terrible fate to a young lad. Raju lived to be 18 as well.

The story of The Sky Is Pink, however, isn't wholly tied to the plot of Aisha's life. In actuality, the film spends an extensive amount of time following the lives of Niren and Aditi over nearly a quarter of a century. Their banter-filled courtship, their progressive pregnancy, their long-distance marriage, Niren's insatiable drive to provide for his family, and Aditi's hypochondria and determination when it comes to keeping her daughter alive fill in the emotional highs and lows of a standard sick-kid plot.

Showing a relationship evolve into a marriage is an aspect of being in love mainstream Indian cinema rarely offers its audience. Most people seated in a cinema hall know that every "happily ever after" is just a precursor to another story. If you look around a theatre, you can observe multiple narratives beginning and ending while one is playing out on the silver screen. Nothing ever wholly ends because no one lives their life in a vacuum.

The Sky Is Pink captures this phenomenon to significant effect. The movie offers up many events that add depth to Niren and Aditi's relationship. Niren and Aditi's first child takes a toll on their marriage. Niren doubting Aditi's chastity does the same. Niren's ambition pulling his family halfway across the globe consistently adds more wear. Aditi's impulsive actions adds more pressure. Caring for their daughter, knowing that she is on borrowed time, adds even more. And the couple working towards making both their children feel loved in equal measure employs them to smile through all their problems associated with parenting. These events and the consequences associated with them offer a grown-up take on the inner machinations of a marriage. It makes for a fascinating watch.

Raju's uncle rarely spent time caring for the troubled boy. His immediate focus was vengeance. He ran from pillar to post trying to appease his bloodlust. However, idiocy and impulsiveness go hand in hand. The word about Raju's uncle soon reached the men he was after. Before he could ever find out the identities of who he was looking for, the men took him out without breaking a sweat. In a week, Raju had lost both his parents and his guardian. A terrified Raju stood near the corpse with two liquids exiting his body. One glistened his tender cheeks, and another made a puddle at his feet. Another boy on the street pointed at him with a grin on his face and exclaimed "Uccha Raju!"

Lest we forget, Aisha plays a massive role in her own life as well. She might have been a caring, loving, brave, strong and wonderful young woman with a lot more to her than meets the eye. But the film isn't interested in portraying her character in a fully realised manner. There is little to no depth to Aisha as she ends up being a stereotypical, snarky, pseudo-sharp-tongued sick kid. Watching her story play out is no different from watching an episode from the final few seasons of House. The structure follows the sick-not-so-sick-well-sick-sicker format sans the comedic relief that makes the well-worn approach appealing.

Raju found himself living on the streets. He lied, cheated and stole to appease his hunger and to keep a tarp over his head. With time, Raju began rubbing shoulders with the local card players. While he made their acquaintance, their skills refused to rub off on him. Uccha Raju played, lost, tried to steal their money, and got beaten up for his troubles every time. And on one fateful evening, he annoyed the wrong group of guys, and that proved to be his final visit to the club.

When investigating the incident, a cop asked one of the witnesses why they would let a known thief into the club repeatedly. The man replied, "We have to. Everyone deserves their chance."

Chopra, Akhtar, Wasim and Rohit Suresh Saraf make for an appealing family. The chemistry they share elevates the sappy writing and melodramatic music at almost every turn. When all else fails, some masterful editing and selective use of silence by Manas Mittal powers the performances put forth by the actors. The choices made by the editing department as they stitch shots and scenes together aids in telling a coherent and poignant story. The non-linear storytelling makes moments feel lifetimes and creates a life that goes past the eyes like a breeze.

While we offer our kudos to all that the film does well, we ask ourselves how and why we will remember this specific story. I, for one, will treasure the baptism scene, the carolling scene and a scene in the ladies' restroom. These three sequences perfectly illustrate the wear a marriage and being in love has on people just as much as an incurable disease has on a human body. The parallels are almost unmistakable. However, this story is as much about the child as it is about the parents. Hence, one half stays appealing while the other slips into oblivion.

In the same vein, Raju's and Aisha's stories are quite similar. Their ends are preset based on how their lives began. Their stories employ the audience to look away from the obvious to find reasons to make their stories worth telling. The question remains, "Will the people that chose to buy a ticket choose to work their minds as well?"

P. S. Anyone who correctly guesses where the Uchha Raju story is from gets a virtual thumbs up.
Share. Save. Connect.
Tweet
THE SKY IS PINK SNAPSHOT 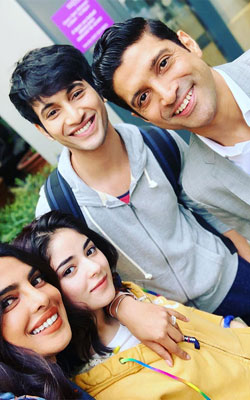 ADVERTISEMENT
This page was tagged for
The Sky Is Pink hindi movie
The Sky Is Pink reviews
release date
Priyanka Chopra Jonas, Farhan Akhtar
theatres list
Follow @fullhyderabad
Follow fullhyd.com on
About Hyderabad
The Hyderabad Community
Improve fullhyd.com
More
Our Other Local Guides
Our other sites
© Copyright 1999-2009 LRR Technologies (Hyderabad), Pvt Ltd. All rights reserved. fullhyd, fullhyderabad, Welcome To The Neighbourhood are trademarks of LRR Technologies (Hyderabad) Pvt Ltd. The textual, graphic, audio and audiovisual material in this site is protected by copyright law. You may not copy, distribute, or use this material except as necessary for your personal, non-commercial use. Any trademarks are the properties of their respective owners. More on Hyderabad, India. Jobs in Hyderabad.