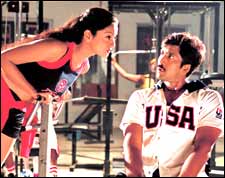 EDITOR RATING
3.0
Performances
Script
Music/Soundtrack
Visuals
NA
NA
NA
NA
Suggestions
Can watch again
NA
Good for kids
NA
Good for dates
NA
Wait to rent it
NA
It's quite rare that the cast of the film you're watching decides to come to the same theater as you to watch the opening show. It's rarer still that the hero of the film sits right next to you. Neither of them happened with this film. Forget the cast of this film, the cast of no film came to the show. That's like going to a place and finding that there's the cast of no film there.

Anyway, Jagan (Sijju) and Ravi (Naveen) are the nephews of judge Ram Prasad (Krishna), who is honest, bold and believes in his convictions, and shows it by wearing orange sunglasses and coming out in public. Jagan, the elder brother, believes in making money through just any means, and there's a genuine reason he has become like this: money can buy a lot of things. Ravi is not that kind - he knows that money is not everything, and besides, big bro is earning enough.

One day the big local gangster, a certain JP, kills some adamantly honest government officials who have raided his property, after his efforts to turn them over a new leaf fail. However, his case lands with Ram Prasad, who dumps JP's son in jail, despite threats from JP that he will kill him and his family members, and, if that doesn't work out, at least request them to die by themselves. Ram Prasad doesn't budge, since he knows that people are anyway going to die if this film doesn't end soon, and the only way to stop that from happening is to skunk JP quickly and end the movie.

Since this story doesn't hold much potential, there's a parallel thread that shows that Jagan and Ravi have an illegitimate elder sister - born out of wedlock to their dad since that's the most popular way to have an illegitimate child. Ram Prasad discloses this to the brothers, and says that their dad's property should be split evenly between the three, after they find the third.

For a change even the self-centered Jagan desires that the property be split in three, but he wants to take all the three parts. This becomes a problem for Ram Prasad and Ravi, as they are afraid that Jagan will plonk off the sister if he finds her first. Really, the best time to find out that you have a sister is when she is born - after that, it can be pretty complicated.

Anyway, Jyothi (Prema), the sister, finds them herself by calling 197. Okay, that's not entirely true - we all know 197 is down half the time. She finds out coincidentally, and uses her brains to get hired by Jagan into their company as the GM, since we're taught right in elementary school that we should check out the finances of a family before we tell them that we're part of them. But then she lands in JP's trap.

Oh well, nobody remembers when Kodi Ramakrishna had his last hit - it's a different generation now. The movie looks like a TV serial on Gemini. And it's also strictly for Krishna's fan club - they are pretty happy when he dances, he fights (yes, you should see it!), he talks, he moves, he looks, he breathes …and, yes, when he wears the orange sunglasses. Good for them.

Naveen has heavier dialogues than he can handle, and the best performers in all this turn out to be the women. Naveen's feminine interest Rati is actually good if you pardon her Telugu diction, and so are the women playing Jyothi and the wife of Jagan. A comedy track by Brahmanandam and Nothing else is worth commenting upon.

ADVERTISEMENT
This page was tagged for
Ayodhya telugu movie
Ayodhya reviews
release date
Vadde Naveen, Krishna
theatres list
Follow @fullhyderabad
Follow fullhyd.com on
About Hyderabad
The Hyderabad Community
Improve fullhyd.com
More
Our Other Local Guides
Our other sites
© Copyright 1999-2009 LRR Technologies (Hyderabad), Pvt Ltd. All rights reserved. fullhyd, fullhyderabad, Welcome To The Neighbourhood are trademarks of LRR Technologies (Hyderabad) Pvt Ltd. The textual, graphic, audio and audiovisual material in this site is protected by copyright law. You may not copy, distribute, or use this material except as necessary for your personal, non-commercial use. Any trademarks are the properties of their respective owners. More on Hyderabad, India. Jobs in Hyderabad.